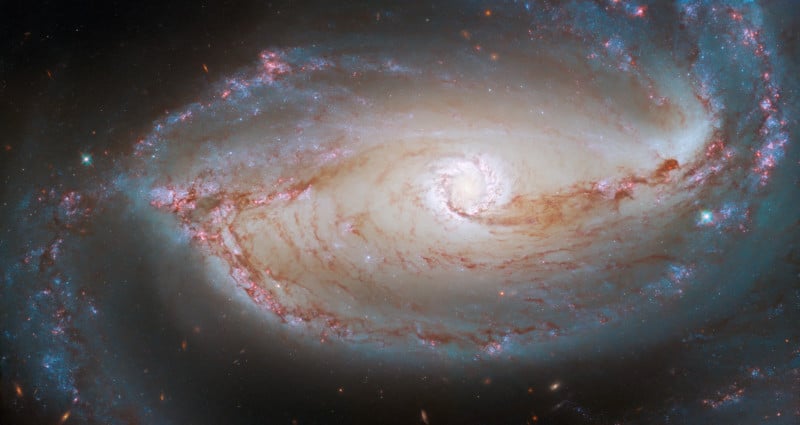 The Hubble Space Telescope has captured an incredibly detailed photo of a spiral galaxy that is shaped like an eye. The photo was made thanks to two of Hubble’s instruments: the Wide Field Camera 3 (WFC3) and the Advanced Camera for Surveys (ACS).

This detailed photo shows the heart of NGC 1097, what NASA describes as a barred spiral galaxy that sits about 48 million light-years from Earth in the constellation Fornax. The photo reveals the intricacy of its “web of stars and dust” at the center of NGC 1097’s center. The red hue are long tendrils of dust extending outward.

A Photo Made Thanks to Two Instruments

The photo was made thanks to two of Hubble’s instruments: the Wide Field Camera 3 (WFC3) and the Advanced Camera for Surveys (ACS). NASA says that the idea that two cameras can be used to take a single image isn’t particularly intuitive, but explains that it is necessary to create a photo like this one.

“Our eyes can detect light waves at optical wavelengths between roughly 380 and 750 nanometers, using three types of receptors, each of which is sensitive to just a slice of that range,” the European Space Agency (ESA) explains.

“Our brain interprets these specific wavelengths as colors. By contrast, a telescope camera like the WFC3 or ACS is sensitive to a single, broad range of wavelengths to maximize the amount of light collected. Raw images from telescopes are always in grayscale, only showing the amount of the light captured across all those wavelengths.”

NASA explains that these color photos that are published to the public are created with the help of filters, a subject that the space agency has explained in-depth on the Hubble website.

“By sliding a filter over the aperture of an instrument like the WFC3 or ACS, only light from a very specific wavelength range passes through,” the ESA continues.

“One such filter used in this image is for green light around 555 nanometers. This yields a grayscale image showing only the amount of light with that wavelength, allowing astronomers to add color when processing the image. This multicolor image of NGC 1097 is composed of images using seven different filters in total.”

The ACS recently celebrated 20 years of continual use, over which time it has captured over 125,000 photos and whose observations have been the source of numerous discoveries.