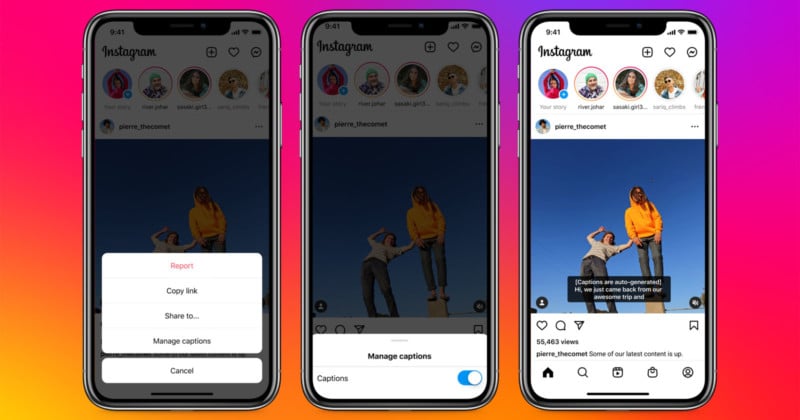 Instagram has announced that it is adding automatic captions to videos uploaded to the platform. The feature follows TikTok, which has enabled auto captions since last April.

Instagram announced that the feature was being added to all videos that appear on feeds. The company says that the addition of captions was done to make Instagram more accessible for those in the deaf and hard of hearing communities, but it will also likely be appreciated by users who browse the app with volume off. Users will have the option to turn captions on or off.

The captions are generated by artificial intelligence (AI), and Engadget reports that Instagram doesn’t expect them to be flawless from the get-go. That said, the company expects the quality to improve as the AI learns over time. The benefit of AI-generated captions is that content creators won’t be asked to add captions themselves.

To start, Instagram says it supports 17 languages, and more are coming down the line.

As mentioned, TikTok implemented this feature almost a year ago and while Instagram is late to the game from that perspective, it shows how much it views TikTok as a competitor. Many of Instagram’s recent updates have focused on making it more like TikTok and less like the classic Instagram experience.

Over the last year, Instagram has aggressively pushed towards developing its support of video. It launched Reels in August of 2020 and has been progressively expanding since to try and directly answer TikTok’s success.

In July of 2021, Instagram openly admitted that it was no longer focused on being a photo-sharing platform, instead it would lean on moving towards whatever its users wanted to see in order to remain entertained.

“We are no longer a photo-sharing app,” Mosseri said at the time. “The number one reason people say they use Instagram, in research, is to be entertained.”

Turns out, that data points to video content. This makes sense, as Reels likely take longer to watch than the time spent enjoying a photo. Later that month, Meta (then Facebook) CEO Mark Zuckerberg, told investors that video was growing in importance for the company and that Instagram’s largest engagement was on video content.

In late December, Instagram outlined its plans for 2022 and said that Reels and video would be a major focus of the company. Expect more features that support Instagram’s video functionality throughout the year as a result.