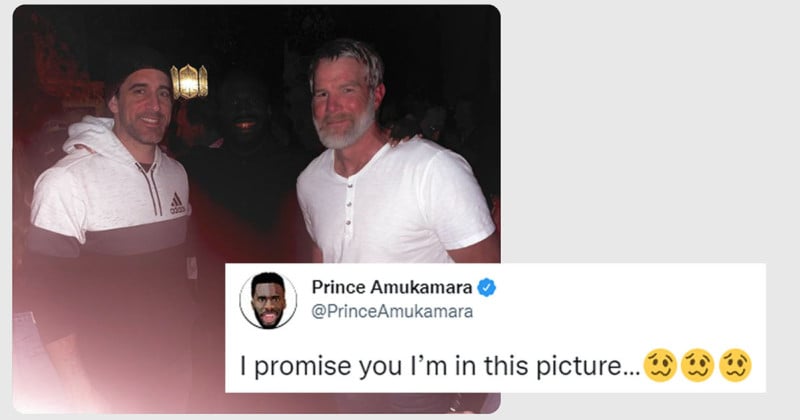 A viral photo posted by NFL player Prince Amukamara highlights a well-documented problem with photography: cameras have historically been particularly bad at correctly metering for darker skin tones. In this case, Amukamara nearly completely disappears from a group photo.

The discussion surrounding photography and how photos render dark skin tones is not a new one. The issue with how even film exposes for darker skin has been investigated in the past. In short, film stocks were designed with light skin as the ideal skin standard, and therefore sometimes it had problems rendering for darker skin. That problem continues to persist even with digital sensors.

The issue is particularly prevalent when dark skin is exposed next to light skin, as cameras often choose to meter for the highlights rather than the shadows or some area of middle ground. A photo shared by NFL cornerback Prince Amukamara is a rather extreme example of this. Below, Amukamara is shown between current and former Green Bay Packers quarterbacks Aaron Rodgers and Brett Favre. Due to the camera’s exposure, Amukamara blends in with the underexposed background of the scene and is barely visible.

I promise you I’m in this picture…🥴🥴🥴 pic.twitter.com/IVyngHoYnk

It is possible that whatever camera captured this photo did not recognize a significant difference between the darkness of the background and Amukamara’s skin, resulting in his extreme underexposure. Arguably, this scene would be a challenge even for larger sensors with greater dynamic range. Smartphones and their small sensors have a difficult time metering both highlights and shadows, and it is possible that even if the phone that took this photo metered its flash better, it would be a challenge to expose for Amukamara without overexposing both Rodgers and Favre.

You should be seen. DM us. #SeenOnPixel

While this might at first glance appear to be a bad time for a company to interject, it is actually very much on-brand for what Google has been doing with its Real Tone technology.

Google has been putting significant development effort into what it calls a more racially inclusive camera for some time. Initially shown in May of 2021, Google argued that people tend to think that cameras are objective, but the truth of the matter is that a lot of decisions — made by people — go into making photography tools. As a result, Google says that historically those decisions have not been made while taking people of color into account.

“Pictures are deeply personal and play an important role in shaping how people see you and how you see yourself. But historical biases in the medium of photography have carried through to some of today’s camera technologies, leading to tools that haven’t seen people of color as they want and ought to be seen,” the company wrote at the time.

“As part of Google’s commitment to product inclusion, our teams are working to ensure that all of Google’s camera and imagery products work for everyone, of every skin tone.”

Google adjusting their computational photography to reduce overexposure and desaturation of darker skin tones in photos: Underrated. I promise you this would help every single smartphone camera I've ever shot with.

With the launch of the Pixel 6, Google debuted the technology that it called Real Tone. The technology uses six different systems to better show dark skin tones in photos: face detection, auto-white balance, auto-exposure, a reduction of stray light, face unblur, and auto-enhancing algorithms that it developed to make the way light hits dark skin look more accurate in images.

Not only has Google spent a large amount of time and investment in this technology, it spends a lot advertising it as well. The company most recently aired a minute-long commercial during the Super Bowl, seen below. For reference, a 30-second spot reportedly costs $6.5 million.

In an essay shared on PhotoShelter, Laylah Amatullah Barrayn, a documentary and portrait photographer based in New York City, argues that the history of photography and its bias needs to be examined before it can be fixed.

“It is imperative to think about the ethics around producing and disseminating photographs. We must be truthful about the harm caused by the hierarchical relationship between photographer and sitter, by the intersection of that relationship with racism and sexism. We must recognize the social effects of our photographs. Only then can we begin to use photography as a tool for empowerment rather than a tool that enacts its own violence,” she writes.

Also shared in that blog post is a quote from Aundre Larrow, a photographer who has been vocal about equity in the photo industry in the past.

“I am begging camera, editing, and phone companies, please do better. Fix your metering, make your flash extend further and be softer. This can’t keep happening.”

While what Google is doing should be praised, it is clearly not enough that such efforts are locked behind one smartphone model from a single company. To look at issues like the one affecting Amukamara, more companies have to dedicate time and effort to actively address the problem.