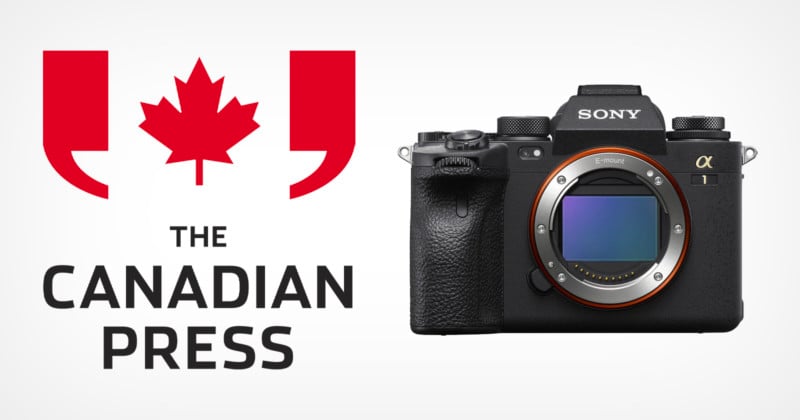 The Canadian Press, the largest news organization in Canada, has announced that it would be switching its journalists entirely over to Sony camera equipment. Sony will become the exclusive imaging products provider for the media company.

The Canadian Press is a multimedia news publication that covers broadcast multimedia news and print media and employs more than 180 journalists. The organization says that the switch to Sony means its photojournalists and videographers will use a variety of Sony cameras and lenses to quickly capture hundreds of powerful editorial photos and videos every day, ranging from large-scale global sporting events to local Canadian news, politics, and lifestyle content. The organization specifically called out the Sony Alpha 1 and Alpha 9 II cameras, but far more of Sony’s camera lineup is likely to be leveraged.

“Sony’s innovative technology takes the high quality of our visual journalism to a whole new level,” Malcolm Kirk, President of The Canadian Press, says. “More than 600 media clients rely on our online CP Images archive as the go-to destination for contemporary and historic multimedia imagery of Canada’s people, places, and events. That’s why we were looking for more than just a camera provider. We needed a true partner committed to helping us deliver first-rate visual journalism.”

The rollout of Sony camera photo and video kits to Canadian Press journalists is already in progress, with distribution planned throughout early 2022.

The Fourth Major News Group to Switch to Sony

Sony has been on a streak of major signings in the last two years, with The Canadian Press being the fourth major global news organization that the company has become an exclusive partner of its products. In July of 2020, the Associated Press announced a partnership with sony to become the exclusive supplier for AP news photographers around the world.

A year later in August of 2021, the PA Media Group, the largest national news agency in the United Kingdom and Ireland, also announced that it was switching exclusively to Sony. Just three months later, Gannett and USA Today signed a similar deal, selecting Sony as the exclusive camera provider for its more than 250 national and local media outlets.