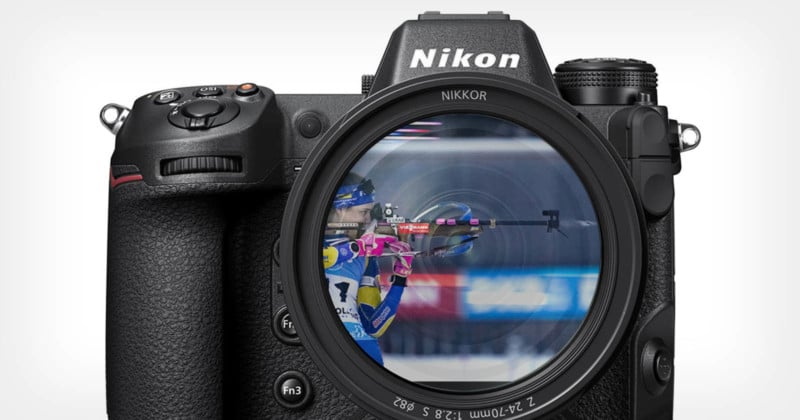 Nikon touts its new Z9 mirrorless camera as being able to capture motion faster than the human eye can see. One photographer just discovered that the camera is so fast that its burst mode can be used to capture speeding bullets.


Swedish photographer Göran Strand was covering the Biathlon World Cup in Ruhpolding, Germany, with the Nikon Z9 this weekend when a question popped into his head: is the camera fast enough easily to capture a bullet fired from a rifle without any specialized equipment?

Photographing a Bullet with the Nikon Z9

Freezing a bullet in a photograph is usually done with the help of special triggers that expose the photo at precisely the correct moment or high-speed cameras that can create ultra-slow-motion footage, but the $5,500 Nikon Z9 can capture 120 frames per second at a resolution of 11 megapixels per image.

When Swedish athlete Hanna Oberg stepped up to shoot her rifle, Strand began his experiment. The first step was to nail down the timing — the goal is to capture the moment the gun is fired with as short a burst as possible due to the sheer volume of photos the Z9 can create.

“I tried to get the rhythm of [Oberg] shooting since I didn’t want to hold the shutter release button down too long,” Strand says. “At 120 fps you get lots of photos to look for a bullet in.

After a few tries, the experiment proved to be a success: Strand began seeing bullets within each burst of photos.

A Bullet Photo Captured with the Nikon Z9

The bullet is no longer present in the next photo captured in the same burst, but you can see the smoke from the shot trailing the bullet from the barrel of the rifle.

With the timing figured out, Strand moved on to creating cleaner exposures and better compositions.

The Nikon Z9 Mirrorless Camera Was Built for Speed

The Nikon Z9 features the world’s fastest image scan rate, minimizing the problem of rolling shutter distortion and thus allowing Nikon to completely leave out the traditional mechanical shutter from the camera. The EXPEED 7 image processor in the camera is said to be 10 times faster than the Nikon Z7 II.

In addition to being able to capture and process photos quickly, the Z9 also has an autofocus system that can keep up: it features 3D tracking and fast and accurate calculations of up to 120 cycles per second, allowing photographers to nail focus even while shooting at a ridiculously fast clip.

“Overall I’m super happy with the camera,” Strand says. “The autofocus is just amazing when it comes to 3D tracking athletes. Also, the image quality is super great, even at higher ISOs. The 45-megapixel resolution allows you to really crop in close on the action if needed.

“[It’s] quite amazing what cameras of today are capable of. Catching a bullet is quite an achievement and something you needed specialized high-speed cameras to do not that long ago.”