Wet plate photographer Markus Hofstätter recently acquired a Zeiss 300mm f/4.5 lens, and although it produced beautiful results, the process of getting to a finished image was filled with numerous obstacles along the way.

The Austria-based Hofstätter is not a stranger to DIY solutions when it comes to antique photography equipment. From fixing a solid Linhof tripod that was left in a bad shape to creating a mobile darkroom out of an ice fishing tent to making his own ground glass focusing screens — Hofstätter knows how to bring traditional photography methods and gear into the modern world. After he received his new Zeiss lens, with the help of a drill, Hofstätter modified an existing lens board to fit the new flange on it. Unfortunately, he broke the whole board in the process and turned to his 3D printer to solve the issue, instead.

After eight hours of printing, the new board was ready but as Hofstätter picked it up, he realized the build plate — which provides a flat surface for the bottom layer of the print — was damaged in the process. This meant extra time that needed to be spent on fixing the printer by replacing the build plate.

The first copy of the lens board wasn’t up to his standards, so Hofstätter had to print another one and, anotehr eight hours later, it was ready to be fine-tuned. Hofstätter then had to drill holes for screws and paint it matte black before fitting it. But his struggles didn’t end there. Because of the lockdown due to the pandemic, Hofstätter couldn’t invite anyone to his studio to pose for him. Lacking any other subject, he decided to do a multi-exposure self-portrait, instead. For that, he turned his studio into a darkroom to allow him to shoot multiple exposures. Once the plate was ready, Hofstätter shot three exposures of himself, changing the position every time. In his YouTube video, Hofstätter shows the satisfying process of his plate turning into a beautiful image. 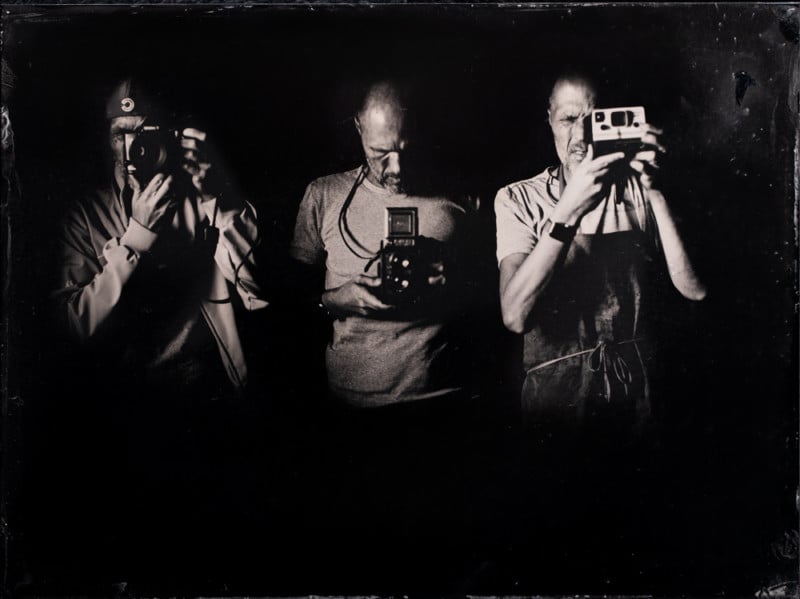 After posting the video, Hofstätter also added a second part in which he was able to photograph a family with the newly purchased Zeiss lens as he had initially intended.

More of Hofstätter’s work can be found on his website, Instagram, and his blog, including a list of what tools he uses for his wet-plate photography. Hofstätter’s prints from the shoot can be viewed on ArtPal.