Hofstätter, based in Austria, has photographed it all — from portraits to wildlife — but hadn’t experimented with food until an unexpected connection was made. While in the process of purchasing a Cambo AST studio stand, Hofstätter learned the seller was well-known food photographer and columnist Hans Gerlach.

After months of planning and discussing, both decided to collaborate on a high-end food photography shoot using the wet collodion process. Hofstätter and Gerlach had to carefully plan what dishes to photograph and what colors the dishes should contain because this type of photographic process only sees blue light — this means that red color turns black and blue turns white.

Hofstätter writes in his blog that the collaborative project was even more enjoyable because of Gerlach’s extensive food preparation and presentation experience which combined well with Hofstätter’s own expertise in the wet plate collodion process. 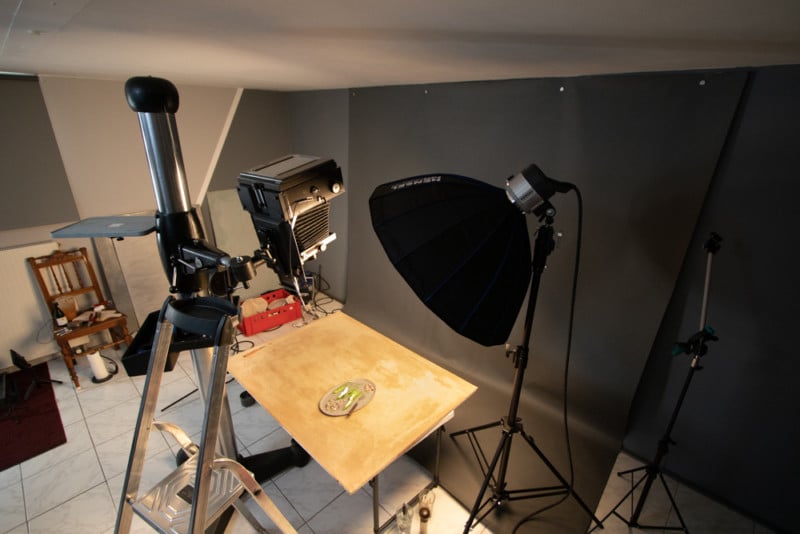 The shoot took place in Hofstätter’s studio where he used a 13 x 18 centimeter Mentor camera with a 250mm Zeiss Tessar lens. While Hofstätter set up the equipment and made it’s secure enough for top-down photography, Gerlach prepared the dishes in the kitchen. Both worked tirelessly throughout the first day and photographed numerous dishes but realized that the silver nitrate bath had turned bad which caused some plates to come out less than ideal. Once the problem was corrected, they could return to shooting and producing successful wet plate images. 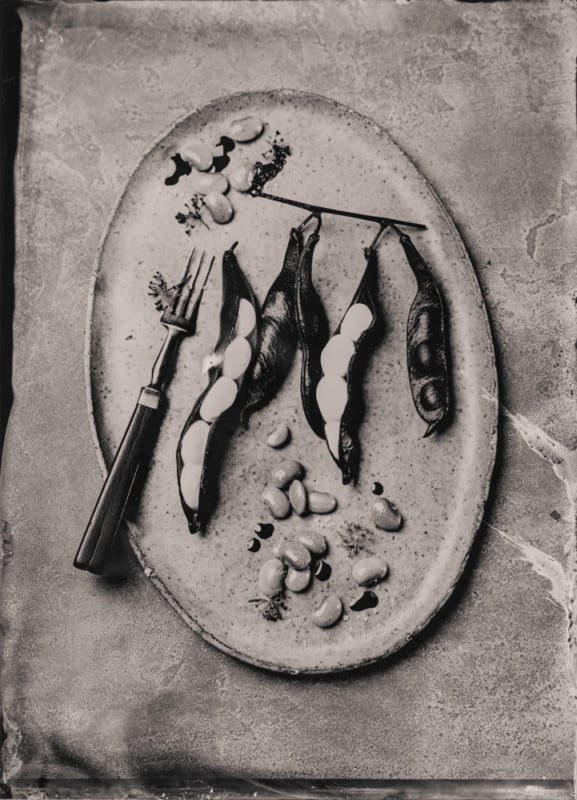 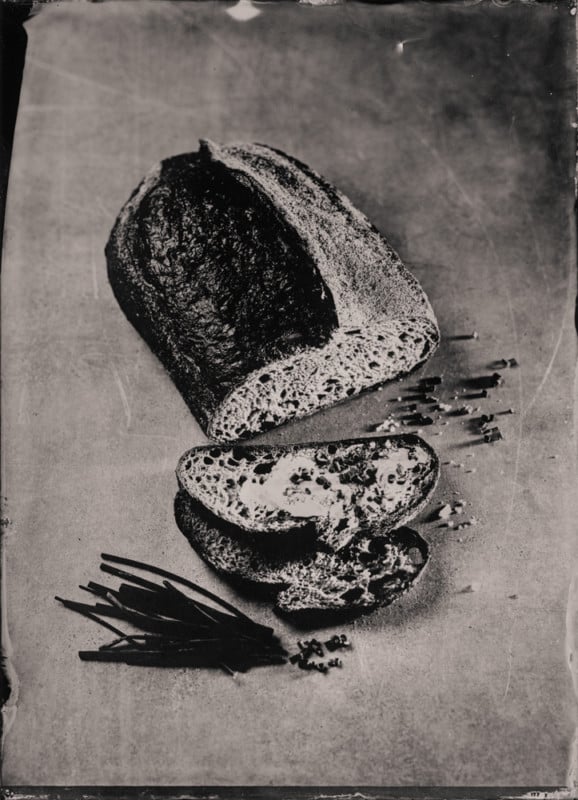 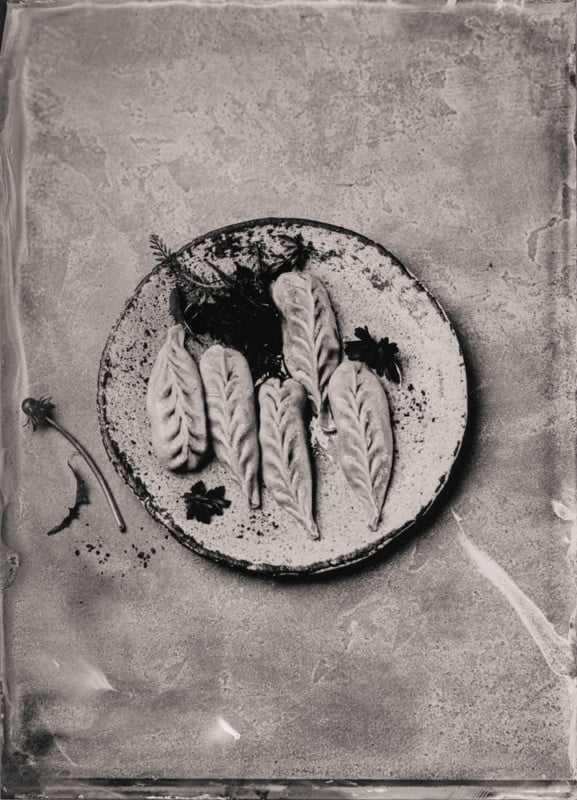 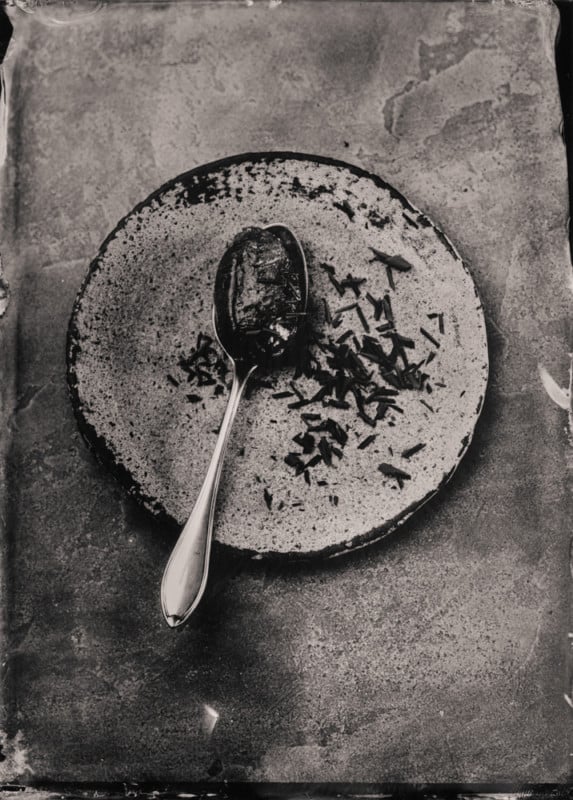 This is not the simplest type of photography and other issues were caused by Hofstätter’s modified wet plate holder which didn’t stay in place and caused some plates to become scratched.

“This is something every wet plate artist has to face from time to time,” says Hofstätter.

However, most plates turned out exactly how they imagined it — full of detail and texture that would look great as large prints.

Hofstätter also shot some plates with a 150-year old Dallmeyer 2b Petzval lens which created a swirly bokeh. Even though the lens produced a strong out-of-focus area, what was in focus — such as the texture of the bread and the onion pieces — show great detail when closely inspected. 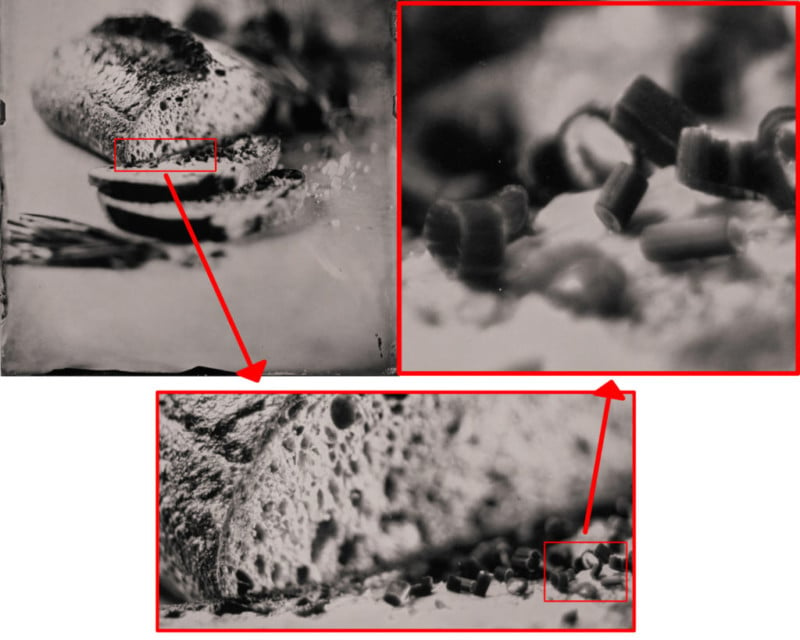 More of Hofstätter’s work can be found on his website, Instagram, and his blog, including a list of what tools he uses for his wet-plate photography. Hofstätter’s prints from the shoot can be viewed on ArtPal.

Image credits: All images by Markus Hofstätter and used with permission.