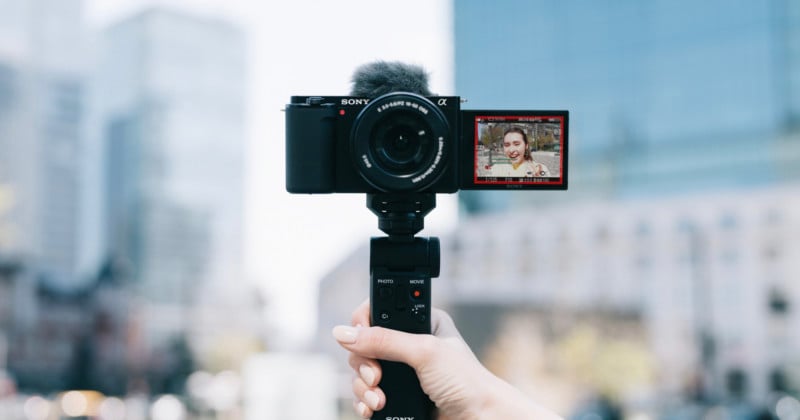 While the global chip and parts shortage has made the availability of new camera equipment scarce across the board and most manufacturers have had difficulty meeting demand, Sony may be the one feeling the biggest pinch.

According to a report from CNET Japan which was spotted by DigiCame-Info, Sony’s market share in Japan took a massive hit in recent months as it has been unable to produce enough camera equipment to keep store shelves stocked.

Of note, the report claims Sony’s ZV-E10 sold well due to its relatively low price, but the company was forced to suspend manufacturing of the new camera due to lack of parts availability. Prior to the halt, Sony temporarily had the top share of the market before taking a nosedive and ceding the top spot to Canon.

The graph on the left below is titled “Sales Volume Share” and the two lines in red and black denote Canon and Sony respectively. Sony was doing well through September before a massive falloff in October and November. Canon appears to be less affected and has seen its sales volume share grow in that same time period. The graph on the right shows the average per-unit price of cameras ordered, and the black line with yellow triangles represents Nikon. Due to the Z9, the average price of cameras ordered from the company jumped significantly in November, which shows the popularity of the new flagship camera which has still not been released to the public. Looking at that same graph, Sony’s average price has been increasing steadily at the same rate its sales volume share has collapsed, which seems to indicate the company is selling its more expensive cameras, just at a far lower volume than it was moving cameras like the ZV-E10. Somewhat of note is that Canon’s unit price has hardly fluctuated even amidst the company’s sales volume growth, which indicates the R3 hasn’t had much of a sales impact in Japan.

Digicame-Info compared the top-selling cameras in BCN’s rankings over the last few months and found that the Sony a6400 and the ZV-E10 both led the way for Sony before sales fell off a cliff in September, so it appears the impact of the supply shortage for its lower cost cameras was extremely significant.

What is not particularly clear is if this manufacturing choice is because there are very specific parts for the ZV-E10 that Sony could no longer procure or if it is because the company chose to focus on its higher-end cameras over it. From a pure sales volume perspective, it would have made more sense to continue to produce the ZV-E10 over cameras like the Alpha 1 or Alpha 7R IV since the company was clearly selling more of them, at least in Japan.

On that last note, these numbers only reflect sales in Japan, so the company’s global sales and reach may or may not coincide with this data. Still, it’s a strong indication that of all the camera companies, Sony has felt the pinch of the global parts shortage the most.