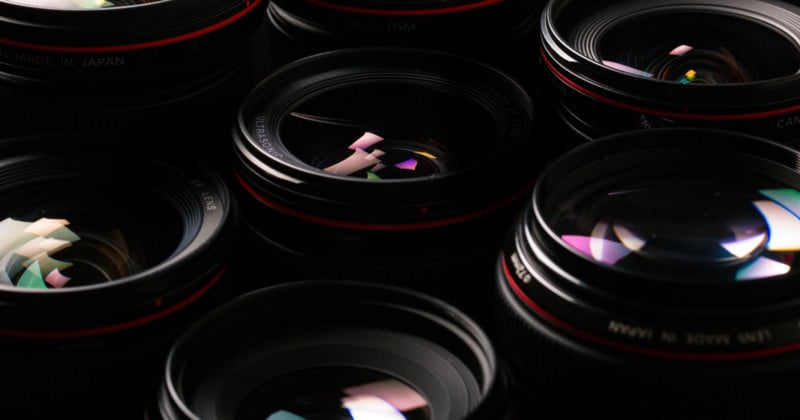 Let’s take a look at some of the data with regard to the latest trends in camera gear buying, trading, and selling. Specifically, we’ll take a look at what lenses hold on to their value better: primes or zooms.

Before we go in deep, let’s start with an explainer of what constitutes a prime and a zoom lens. If you’re already in the know, maybe skip down to the next section.

It only offers one angle of view, so if you want your subject to appear bigger or smaller within the frame, you have to physically move the lens closer or farther away.

That 50mm lens is rather compact, however, so it’s portable, and the lack of focal-length flexibility is made up by its wide aperture, which makes it convenient to shoot in low light or to isolate the subject by blurring the background.

Zoom lenses, on the other hand, have variable focal lengths, like for instance, the Canon 24-70mm f/2.8.

It can shoot at 50mm, but also zoom out to 24mm and zoom in at 70mm (and every focal length in between) with the simple twist of the barrel.

With a zoom lens, a photographer can stay put in one spot and conveniently change the angle of view, bringing the subject closer or farther away. But the lens is considerably bigger and heavier than the aforementioned 50mm, and the aperture doesn’t open quite as wide, so it may be tougher to shoot in low light.

These examples notwithstanding, there’s a fallacy that prime lenses are always better optically, offer wider apertures, and are smaller, lighter, and more durable than zooms. While this generalization is somewhat historically accurate, it is no longer the case across the board.

Over the decades, with advancements in design, engineering, and construction, the case for the lesser quality of zoom lenses has held less water, and especially now, that water is mighty muddy.

Nowadays, it’s easy to find a zoom lens that offers great optical performance and a wide aperture, but perhaps sacrifices size and weight. The large and heavy Canon RF 28-70mm f/2 is a perfect example of this.

Inversely, the tiny Fujifilm XC 15-45mm f/3.5-5.6 zoom has nothing on the image quality and wide aperture of the Fujifilm XF 50mm f/1.0 prime, but it’s considerably smaller, lighter, and offers a flexible range of focal lengths.

This newfound balance is the reason most photographers own both primes and zooms—different jobs demand different tools, and manufacturers have responded by addressing the needs of different photographers.

But say there are two camps of photographers out there, one who exclusively invests in zooms, and the other in primes—who stands to spend more, but ultimately gets more back when they upgrade or change systems? Let’s find out.

For this dataset, I limited it to one condition grade (EX) across all exceptions (with cap; with cap and hood, etc.). I set the time period from January 2018 to the current month of November 2021.

First, I looked at the average buy price for each type. The buy price is what a customer would spend buying the used lens at KEH. 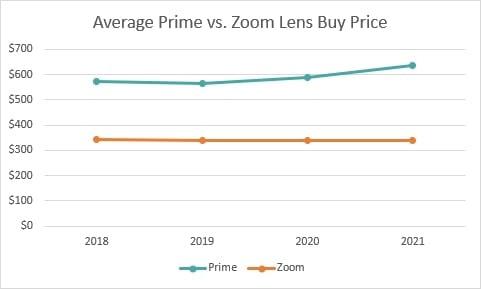 As you can see above, there’s quite a price gap between the two types, with primes being considerably more expensive. The current average buy price for a prime lens is $637, while for zooms it’s $340.

More importantly, prime lenses have increased in price by 11% over the last three years, while zooms have decreased by 1%.

When looking at which models have decreased in price the most, I thought there might be a lot of kit zoom lenses on the list, as they are plentiful, and usually lose their value pretty quickly. The Canon EF-S 18-55mm f/4-5.6 is in fact on there, dropping in price by 52.3%, but surprisingly, it’s the only kit lens in the bottom 100.

Most of the other lenses that have lost considerable value are Alpha-mount zooms, which have become less relevant since Sony quietly discontinued the mount earlier this year. Other zooms that have not fared well are for the Canon EF-M mount, which has also been dropped by the manufacturer in recent times.

Overall, if the mount is still active, there seems to be appreciation across the board for zooms, although on average, it’s definitely less than what’s happening on the side of primes.

Speaking of primes, the primes that have depreciated the most are, once again, Alpha-mount lenses, but also wide aperture manual focus lenses like the Meyer-Optik Gorlitz 50mm f/0.95, which has fallen in value by nearly 70%. In fact, out of the top 15 depreciating primes, 8 of them are from Meyer-Optik.

These Meyer-Optik lenses launched at high price points when the market wasn’t as saturated with wide-aperture manual focus lenses, but the arrival of more budget-friendly brands like 7Artisans and TTArtisan have severely altered the used market for that category of lenses.

So, why the sudden meteriotic rise for these 46-year-old prime lenses?

The answer is that they’re highly sought-after for use as cinema lenses.

As our own Video Field Test series can attest, the pleasing image quality for these vintage fast primes really lends itself to capturing video, and the small size and adaptability of the mount make them great for use with both big cinema cameras like the Canon EOS C200, or small mirrorless cameras like the Sony a7S III.

Overall, legacy lenses are the main reason that primes are getting a sizable price increase over zooms. And it’s not just 35mm lenses—medium format lenses from Mamiya, Bronica, and Hasselblad have also risen in price considerably over the last three years. The resurrection of film photography has had a sizable impact on this, as well as how easy it is to adapt older lenses to mirrorless camera systems.

In addition to the average buy price, I also looked at the average sell price for each type. The sell price is what a customer would receive selling their lenses to KEH. 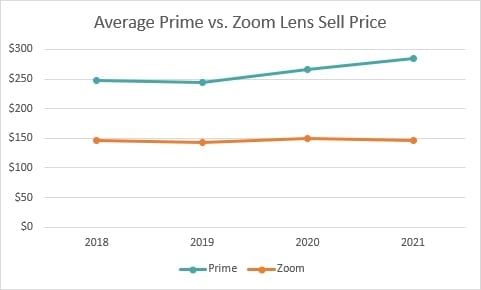 Unsurprisingly, the average buyback price shows the same trends, with zooms decreasing by 1%, and primes seeing an even bigger jump up by 15%.

Clearly, as the scarcity of legacy prime lenses increases, so does the amount that we’re willing to pay for them.

Overall, I think if we were to take manual focus legacy lenses out of the equation, and just hone in on autofocus lenses, the results may be different.

For example, let’s revisit those two first two EF lenses I talked about.

Ultimately, photographers that shoot with a mix of modern and vintage glass might see a sizable difference in value between their primes and zooms, whereas those that only shoot modern autofocus lenses might see little to no difference in either direction. I’ll dig in a little deeper into this in a future article.

For the moment, it goes to show that when it comes to lens selection, it pays to diversify.