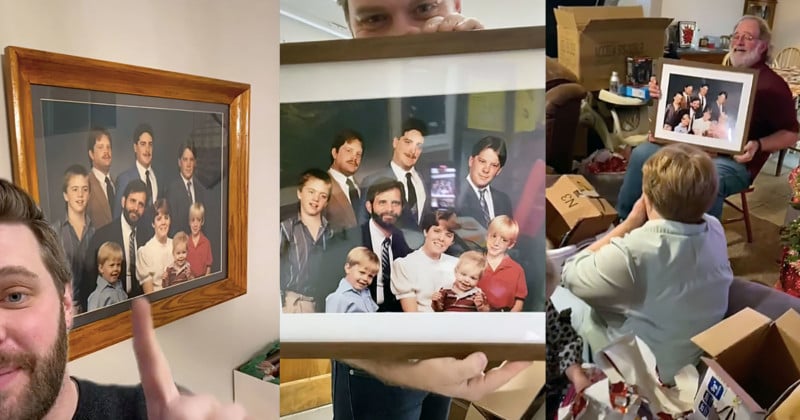 Author Kyle Scheele grew up looking at a family portrait that has hung in his parents’ house for the past 30 years — a photo his dad absolutely hates. As a Christmas present, Scheele decided to use his Photoshop skills on the picture to create the best gift idea he’s ever had.

“[The photo is] my dad, my mom, me, my brother, my cousins, and my uncles,” Scheele says. “My dad hates this picture so much because for no discernible reason the photographer made only my dad tilt his head and my dad didn’t know that until after the picture was already developed.”

“My dad hates the picture but it’s important to my mom so it continues to hang in the house.”

While thinking of a Christmas gift for his father, however, Scheele realized that he could use digital image editing to “fix” what the original photographer did.

After loading the photo into Photoshop, Scheele did a precise selection on his father’s head, cut it out, rotated it to remove the tilt, and cleaned up the original head in the background.

Scheele has prankster blood running through his veins, though, so he did not stop there. Instead, he rotated all the other heads in the group photo and rotated them to give them the tilt his father was irked by.

Once his masterpiece was completed, Scheele had it printed and framed. The result is a high-quality family portrait that will surely become a family heirloom.

On Christmas morning, when Scheele’s father unwrapped the gift, Scheele’s mother laughed so hard that she cried. 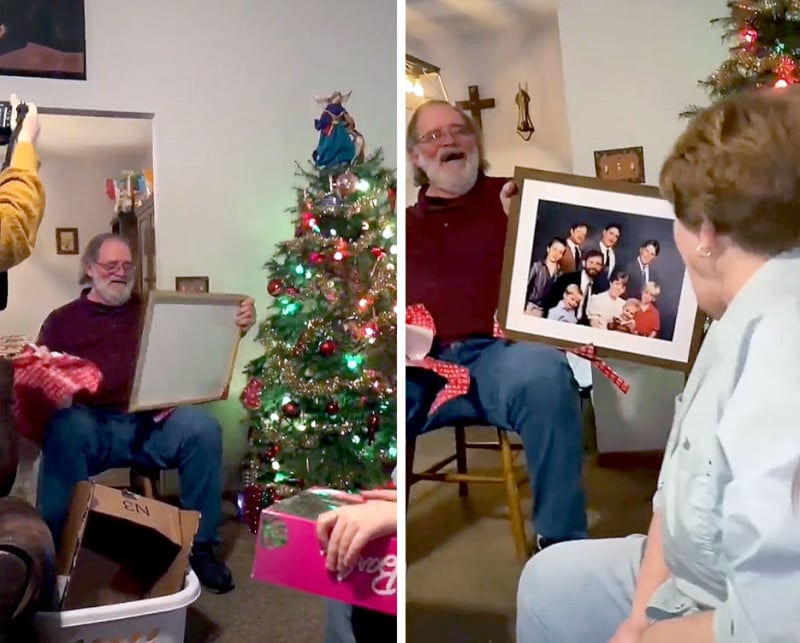 You can watch both the creation and unwrapping of this prank family portrait in this 2-minute video:

You can find more of Scheele’s humorous shenanigans on his website and TikTok.

Image credits: Video and still frames by Kyle Scheele and used with permission