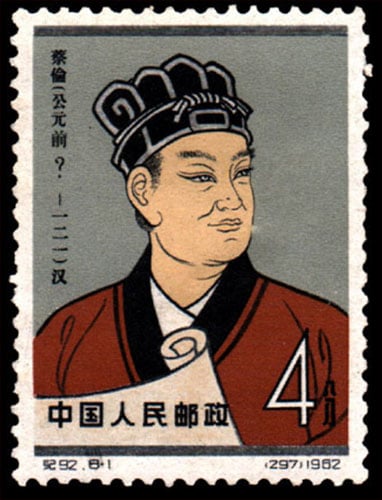 My dad is an avid stamp collector. While he does have some US stamps in his collection, he mainly focuses on older stamps from China.

He used to purchase stamps exclusively from reputable stamp companies, but recently he’s been looking for good deals on rare stamps through eBay.

In the world of stamps, errors often cause the stamp to be worth much more than its face value since they’re highly sought after by collectors.

One such stamp is a 1962 stamp showing Tsai Lun, the inventor of paper. Right before the stamps were to begin the printing process, they discovered that the birth date had an extra character that erroneously listed the birth date as BC rather than AD. They had to correct the printing plates manually, but omitted one of them, causing a single error stamp to be printed with each batch.

Here’s a photograph of an actual error stamp compared to a “photoshopped” version showing the difference: 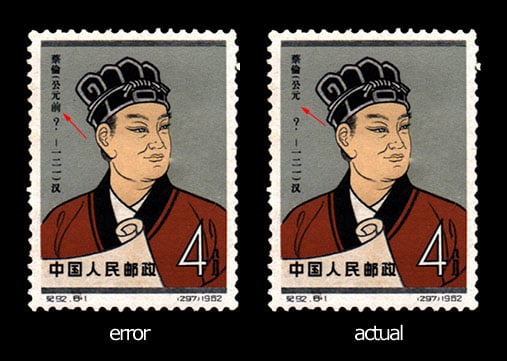 That single erroneous character causes this stamp to be listed among the rarest of Chinese stamps, and causes its value to be upwards of $5,000 rather than tens of dollars for the normal stamp.

Earlier this week my dad bid in an auction for one of these stamps. While he knows eBay is filled with counterfeit goods, everything seemed to point towards this stamp being legitimate. The user who had it up for auction was a top-rated eBay seller with over 1,000+ feedback ratings and a 100% positive feedback history. He also had a number of other listings for much more expensive stamps. After bidding $1,000 for this $5,000 stamp, my dad ended up winning for $400.

While he was happy about his “steal”, we both felt unease regarding whether or not the stamp was genuine. Luckily for us, the listing had a photograph of the stamp. Here’s the photo of the stamp side-by-side with a photo of a genuine error stamp: 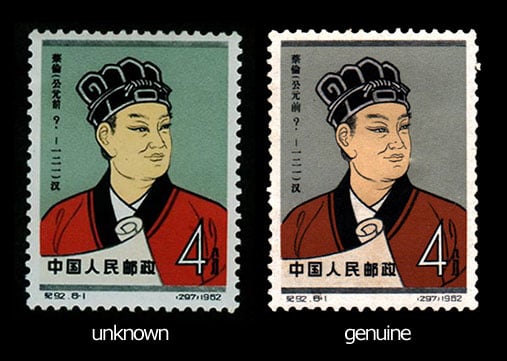 At this point, my background in Photoshop came into play. I realized I could examine the stamps extremely closely and compare them using Photoshop. In fact, Photoshop has a feature that is perfect for this type of comparison. It’s called Auto-Align Layers. What it does is magically align multiple layers based on similar features. Here’s what I did:

Voila! The two stamps became magically aligned, allowing me to turn the top layer on and off for easy comparison. Here’s the exact same comparison after Photoshop’s auto alignment (hover your mouse over it to compare): 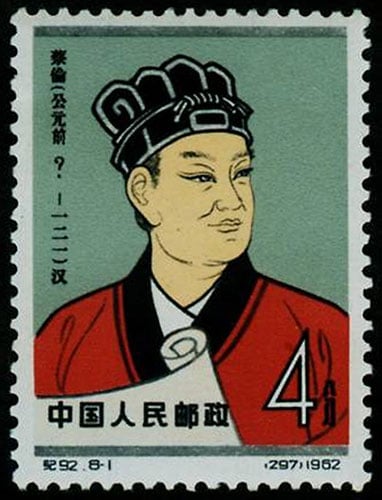 Minor variations in the appearance of a stamp are acceptable, since there are slight variations in the printing plates. Also, though we were initially suspicious of the difference in color, we discovered that it was probably introduced in the imaging process after finding the exact same color variation in an official stamp book.

However, what caught my eye was the single error character in the upper left hand corner. If you examine it during the comparison, you’ll see that it looks different and is shifted upwards in the eBay auction version. We suddenly realized that the same was in fact a legitimate stamp… A legitimate non-error stamp with the error character added in.

With this evidence my dad gave the seller a phone call (yeah, they responded with a number when we asked for it), and confronted them about the forgery. They feigned ignorance and stated that they didn’t know much about stamps, which was hardly believable considering they had other listings for $80,000 stamps. However, they were willing to cancel the transaction and did so immediately.

What I realized through this whole experience was how useful Photoshop can be for fields seemingly unrelated to photography or graphics. I’m sure there are still many stamp experts out there who use magnifying glasses to try and detect counterfeit or altered stamps, while Photoshop can do the same thing much more accurately and efficiently.