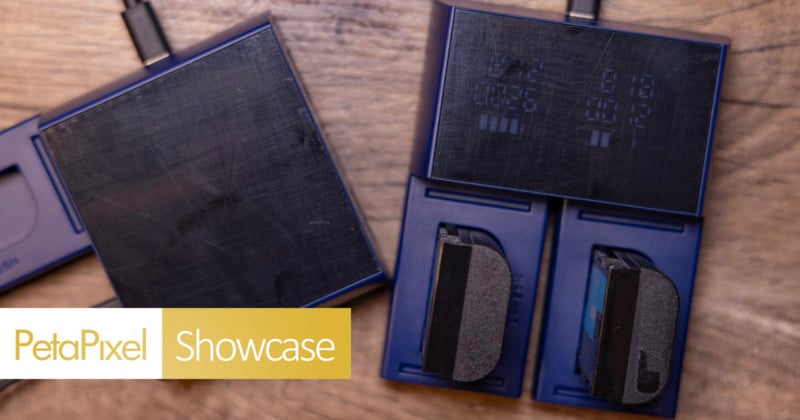 Charging is boring and is easily the part of technology, and certainly photography, that I think the least about. But after using the Bronine Volkit, I honestly can say that has changed.

The Bronine Volkit originally landed on our radar nearly exactly a year ago when it hit Kickstarter. It is what is described as a free voltage charging device that uses a main center hub that plays host to up to four interchangeable charging modules at a time. Bronine called it an “AI charger” because it is able to analyze a battery and automatically adjust the voltage to charge that specific battery at between one and 15.6 volts.

At the time, I called it a stretch to consider this technology “AI,” but was willing to give it the benefit of the doubt. Bronine sponsored this Showcase so that we could see the finished product, and sent over two of its Volkit hubs (the two-port and the four-port) as well as a few battery chargers of my choosing. I don’t use much outside of Canon these days, so I asked for a set of Canon LP-E6 chargers as well as the dongle to charge a DJI Mavic 2 battery. It all came in individual boxes below, none of which had extraneous plastic wrappings which I certainly appreciated. 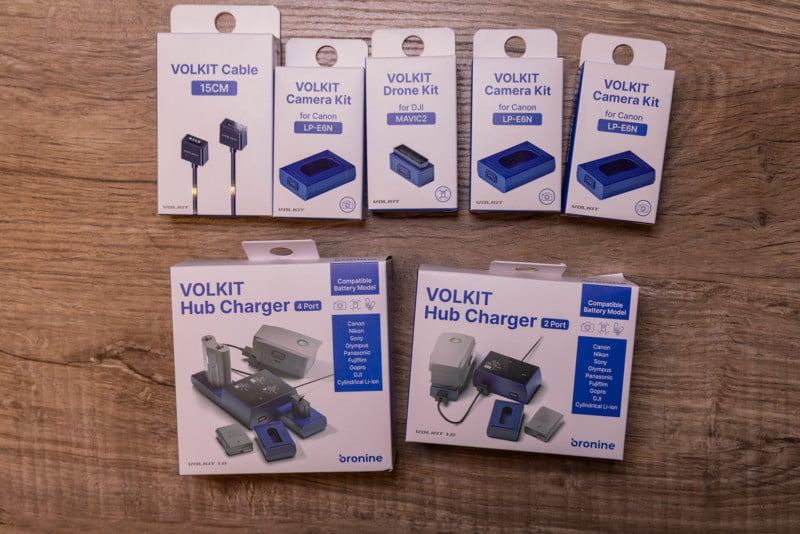 What’s in the Box?

The Bronine Volkit is extremely simple, so what is included is pretty straightforward. Each box contains either a main hub or a module. The modules connect magnetically, so there isn’t much in the way of parts other than the plastic charger itself. The hubs have a bit more, and include a USB-C charging cable (but no charging brick) as well as the hub itself. 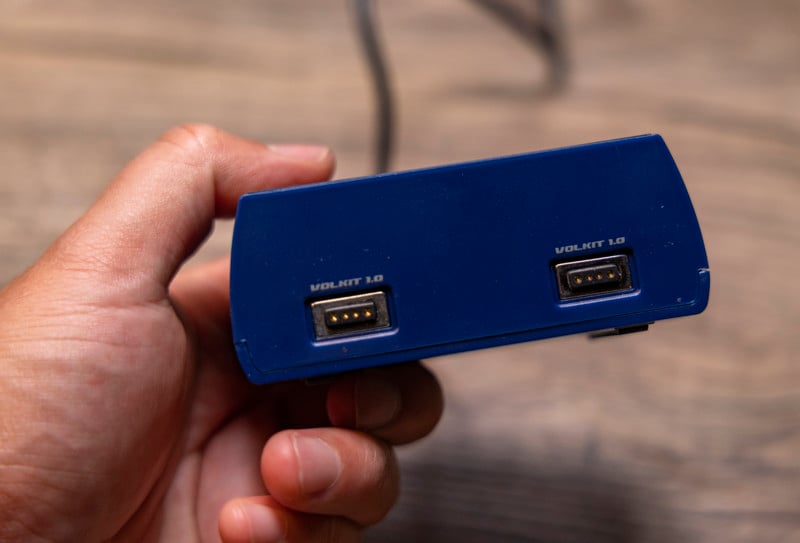 These are an all-plastic affair other than the metal contact points, and while they feel robust enough, I wouldn’t recommend dropping them on a concrete floor.

The number of modules that Bronine offers is rather all-encompassing and covers a huge list of the most-used batteries by photographers. At the time of publication, Bronine lists 32 different modules from the Canon LP-E6NH and the DJI Mavic 2 Pro. to the Nikon EN-EL15C and the Sony NP-FZ100. All told, there are battery options for Sony, Canon, Nikon, Panasonic, Olympus Fujifilm, GoPro, DJI, and even a cylindrical module that can charge five different lithium-ion batteries. 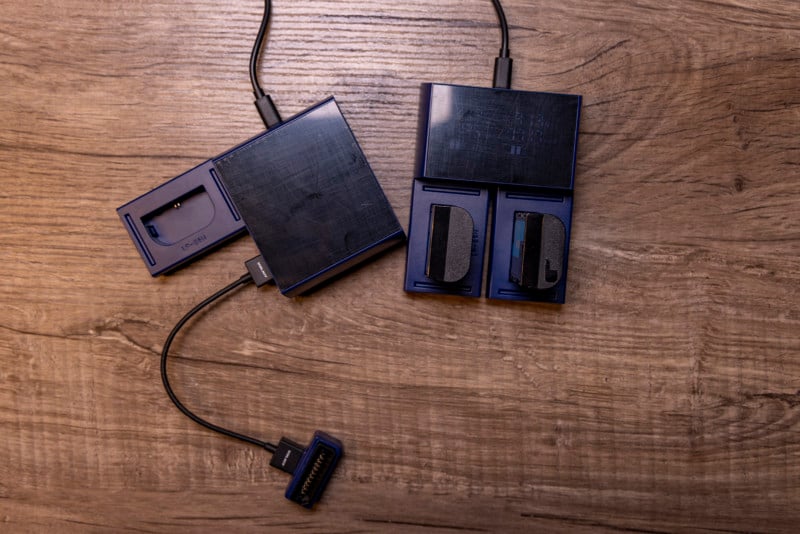 There isn’t a reason why Bronine can’t keep adding more (and I imagine the company will do just that), and it would be nice to see a module for charging four or more AA-sized lithium-ion batteries and also Panasonic’s full-frame camera battery.

Let’s Get to Charging

Once you’ve got the USB-C plugged both into the Volkit itself and into a charging brick, you’re ready to go. The charger works exactly like you would expect: insert a battery, slide the module over to the Volkit hub, and you’re off to the races. Each individual battery charging module or cable is magnetic and connects to any of the open ports on either the four- or two-bay Volkit hub.

It doesn’t matter which port any of the modules are attached to, and they can be plugged and unplugged at will without fuss. 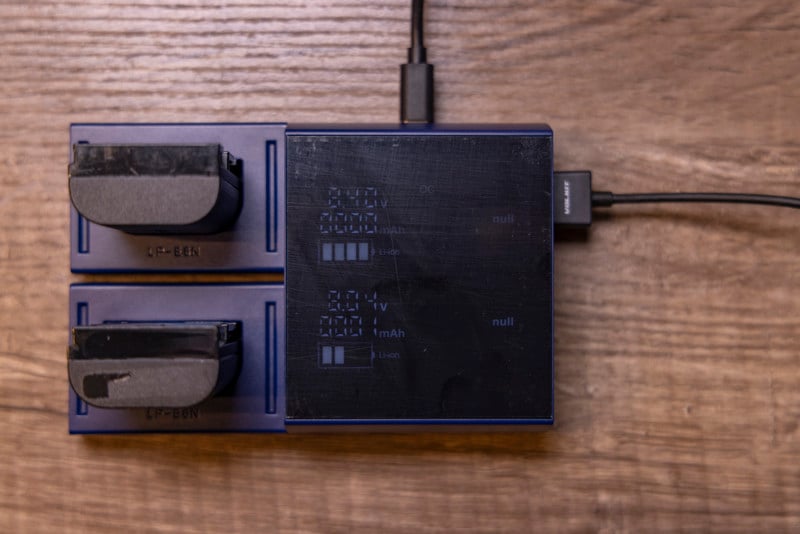 Once locked in, the Volkit needs a couple of seconds to calibrate its voltage, and then it starts charging. The hubs each have a display that shows the progress of the charge, the voltage of the battery, and the mAh that the battery has taken since it has been charged. I originally thought the mAh reading would tell me how much total juice the battery had in it, but it appears to reset any time you plug or unplug the module, so I think it is actually just telling me how much has been added since charging began.

Honestly, I love having this much info. I’ve been using the stock Canon battery charger that ships with the cameras and have been doing so for years, and what the Volkit shows here is so much more useful than a blinking light.

Speaking of that blinking light, it might not be accurate. I had one battery that showed 100% green and fully charged on my Canon wall charger, but it was able to accept more juice once I plugged it into the Volkit.

Basically, it seems like a standard “dumb” charger doesn’t necessarily give you maximum performance as Bronine’s “smart” charger. But the benefits of the system don’t stop there. 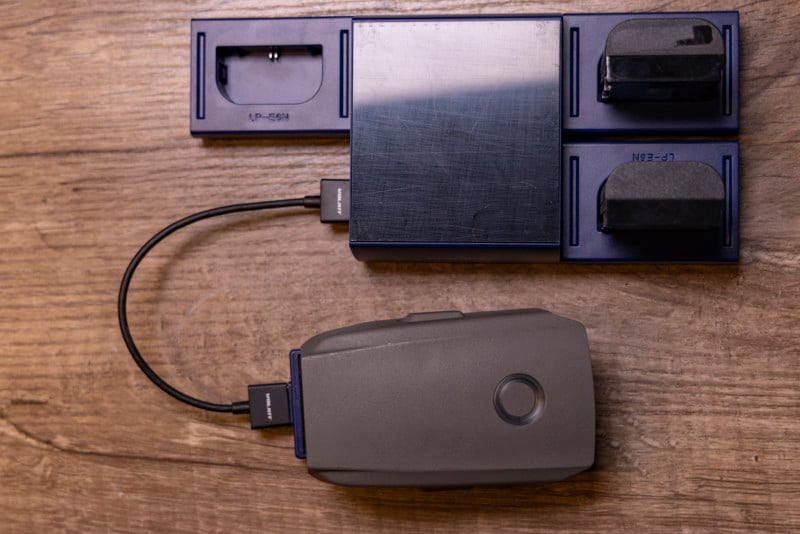 Better Than the Official Charger

In addition to charging, I found something else that really sold me on the Volkit. Two of my LP-E6N batteries that I bought directly from Canon had stopped working in my EOS R in the last few months (I use it as my webcam now). While they still work fine in any of my accessories that are powered by the batteries, the EOS R refused to power on and gave me an “Err” code on the top LCD. Even attempting to charge them in Canon’s wall charger left the little red light blinking constantly, as if to further highlight something was wrong. After charging both in the Volkit, however, they appear to have somehow been reset and the EOS R happily accepts them once again. I don’t know what kind of devil magic is at work here, but I’m not complaining one bit.

If I had to levy one complaint about the Volkit, it’s that the display is pretty dim. In bright light, such as the one in my studio, it can be really hard to see the display as it reflects a lot of glare and doesn’t have a lot of output. This is a pretty small niggle though, if I’m being honest.

The Volkit Gives Me Visibility into Charging

Charging batteries has kind of always felt like a mystery box to me. The stock chargers that ship with just about every camera and drone are mostly a guessing game where I felt like I was just waiting for the blinking light to tell me something useful. If something wasn’t working right, I had no idea how to address the problem.

The Volkit has changed that. It appears smart enough to fix the problems batteries are having and provides me with a level of visibility into charging I have never had before. When I first saw the Volkit, I disregarded it as just another charger and kind of scoffed at the “AI” claims. After using it, I’m happy to be wrong. I’m a believer: this thing rocks.