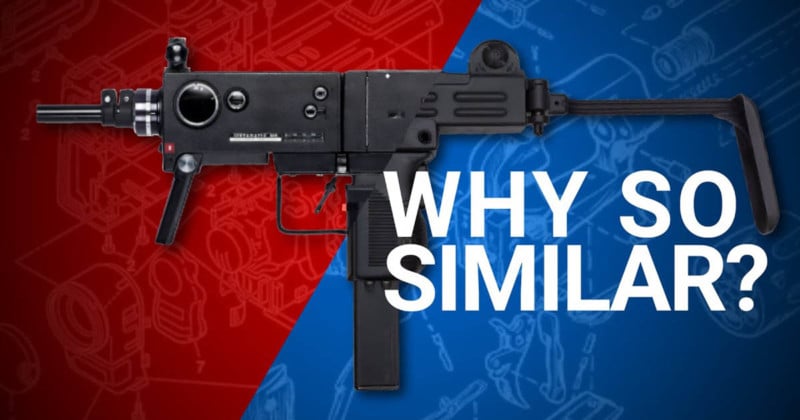 “Why are guns and cameras so closely connected?” This is what I set out to explore and investigate recently through my own experience in film. Between starting the production and finishing it, one major event made this connection a lot darker.

On October 21st, cinematographer Halyna Hutchins was shot and killed by a firearm on the set of “Rust” while standing behind the camera for a shot. That gave my video a completely different twist: at this time connecting guns and cameras is particularly heartbreaking as it’s a reminder of the tragedy.

I’ve been struggling with what to do about my video since then, as it does not cover the event and it’s somewhat marginal to it. But not acknowledging Hutchins’ killing is being ignorant to the environment in which the video comes to be. I’m talking about guns and cameras, and Hutchins was shooting with the camera when she was shot by the gun. Many people I trust advised me to postpone the release of this video, but also pointed out that this is precisely the time to examine the unhealthy relationship the film and photography industry has with guns.

It seems to me that television is exactly like a gun. Your enjoyment of it is determined by which end of it you’re on. ― Alfred Hitchcock

Guns are symbols of power, guns are plot devices (anyone say “Chekhov’s gun”?), and ultimately, tools for humans to kill one another. Why is film, a medium so strong at creating images, stories, and emotions, so tied to objects with the sole purpose of destruction? I urge us to discuss the relevance and representation of guns in our storytelling, the presence of gun-oriented language and marketing in our daily craft, and what we can change to make sure no one ever dies in the process of making films ever again.

There is a deep connection between guns and cameras, and it is not a positive connection. Pop culture teaches us guns are “cool”; first-person shooter videogames and action movies are among top-grossing entertainment options, toy guns are still popular among children, and guns were the reason I got started in film.

Growing up in Brazil, real guns were illegal and out of reach, so as I grew up my fascination with them became harder to sustain. It was about the same time I bought my first camera and decided to pursue a career in filmmaking. There was a sense of familiarity in bringing the camera’s viewfinder to the eye, but I didn’t quite notice that it was the same as lining up a shot with a gun. I also missed that being at the opposite end of the barrel is intimidating in both cases.

After more than a decade working in film, the language started to stick out, as I both heard and said things like “kill the blonde” while referring to a light, “get that shot” as an ultimatum for an important setup, “use the pistol grip” or “slide onto the NATO rails” when talking about accessories, “pass me that mag” for requesting an empty memory card, and much more. Photography and cinematography have a gun-loaded language.

This connection is present not only through the language but in the development of cameras from their very start. The movie camera’s original shape was Étienne-Jules Marey’s chronophotographic gun from 1882, which was made to look and operate like a rifle but aimed at studying the movement of animals.

The chronophotographic gun was inspired by an astrophotography camera called Janssen’s Revolver.

Janssen’s Revolver was inspired by Samuel Colt’s revolver, an 1836 gun that inspired more than one camera and created a whole film genre: the western. Westerns and gunslinger stereotypes inspired more “cool” camera gear, like hip holsters and a lens holder with the suggestive name of Quikdraw.

This link is reinforced by a cyclical (and uniquely American) relationship between economics and culture: guns are popular because they are cool and guns are cool because they are popular. And so it’s not surprising, given the entanglement of American gun culture and Hollywood that this link has grown to include the marketing of camera gear:

The worldwide market for photographic equipment generated $84.8 billion dollars in 2020 and continues to expand. The US alone represents almost a third of that market, so as a company both domestic or foreign, it would make sense to cater to American values to increase sales.

Guns are a cornerstone of American values and culture, with Hollywood using cameras to export this mindset better than anyone through iconic films with cool characters doing cool things with cool guns. And increasingly, these aren’t just American values; Hollywood productions represent 80% of the media consumed all around the world, according to the documentary This Changes Everything.

From a 1966 article in Time magazine:

Americans have always been a gun-toting people. Guns enabled the first settlers to protect … themselves … made colonists a nation of rifle men capable of winning their freedom in the American Revolution. The West was tamed with guns… From the nation’s earliest days, the gun has been the delight of collectors and sportsmen.

So America exports films with the idea that guns are super “cool”, and although the rest of the world is not as open to gun ownership, we are collectively fascinated by the killing machines. And conveniently, there is a socially acceptable alternative: the camera. This allows photo and film equipment companies to appeal to customers who don’t actually want a gun but are attracted to them nonetheless.

This feeds into the feeling that photographers and cinematographers are nothing short of obsessed with gun-looking camera gear. The Phoblographer’s article on the DORYU 2-16 pistol camera describes the similarities between the camera and a gun as “the stuff of photographers’ dreams”. Popular YouTuber Mathieu Stern recently made a video about the Soviet’s Photosniper camera and many comments in that video point out the risks of using such gear these days because of how much it looks like an actual gun.

These are glaring examples, yet still the correlation runs deeper. It hints at using cameras as proxies for guns. Some camera companies have leaned hard into it, with a mentality of “using our cameras or gear make you as powerful as brandishing a gun!”

A quick glance at RED Digital Cinema’s Arsenal reveals names like Rocket and Weapon, a Ranger camera body, all while their refurbished program calls the cameras “Battle Tested.” Market-leading camera support manufacturer Tilta uses the tagline “arm your camera.” All parts are sleek, black, full of notches and grooves. If we are looking from close enough, it is hard to say if we are looking at a camera rig or a rifle.

The technology for both cameras and guns was born together, according to Paul S. Landau’s Images & Empires: Visuality in Colonial and Postcolonial Africa, and it continues together to this day: camera rigging has recently adopted the firearm-originated NATO rail as a standard for accessories, while firearms have incorporated Arca-swiss tripod mounts for bipods and support.

The gun-oriented marketing instills the idea that by using this camera you will be more of a “manly man” – yet not necessarily more of a filmmaker. This echoes in the content being created, with several shorts on YouTube featuring photographers using their cameras as firearms, such as Battle at F-Stop Ridge or Camera Warfare.

Susan Sontag offers a mildly hopeful perspective, suggesting a scenario where “people are switching from bullets to film. The photographic safari is replacing the gun safari in East Africa. The hunters have Hasselblads instead of Winchesters; instead of looking through a telescopic sight to aim a rifle, they look through a viewfinder to frame a picture”. It is debatable, however, that it is actually an improvement; as recently as 2013 Nikon was in the crosshairs of photographers for claiming to be a company “at the heart of nature”, while also producing scopes for rifles used to kill big animals. The irony was not lost, and as a result, scores of photographers abandoned the brand.

Thankfully, not all camera makers are aiming for the gun connection. Aaton cameras, for example, were designed to “sit like a cat on the shoulder”. Industry-favorite Arri does not strive for the gun link either, especially when compared to RED. Arri has the workhorse reputation, the camera that will always deliver under any conditions, and the absolute leader when it comes to films screened in Cannes for the last several years or Oscar Nominees for Best Cinematography. So the link with firearms is not a requirement of the business, but a conscious choice of manufacturers’ marketing specific values.

As Sontag puts it on her essay In Plato’s Cave, “To photograph is to appropriate the thing photographed. It means putting oneself into a certain relation to the world that feels like knowledge – and, therefore, like power.”

As photographers and cinematographers, we have accepted this power, but now it is time to embrace the responsibility of developing a culture in which cameras are used to share our voices instead of as tools for normalizing violence. Light comes into a camera to create beautiful, meaningful things, to add to our lives. And that’s the opposite of a gun which spits out bullets to conquer, to kill, to destroy.

Deirdre Evans-Pritchard’s short article on this same subject points us to the first necessary step:

[P]erhaps it is time for a new language that separates the process of capturing an image from that of taking a life. There are enough words out there for us to use already. For a start, film is no longer just a noun, it is also a verb so we can film a film (…). [W]e do take photographs and footage… we take them away and use them somewhere else. … So let’s go out and take in, engulf, gather in, assimilate, pull in, collect, ingest, realize, receive, immerse, consume, or take up a film today. If this is too obviously from a thesaurus perhaps we need some new lingo.

Simply updating our vocabulary creates an impact on our surroundings. Instead of “run-and-gun,” we can say “docu-style.” Let’s say “capture” instead of “shoot, or “anamorphic” instead of “scope”.

Changing our language affects how we think and make films, leading back all the way to how cameras are marketed and, hopefully, paint a new picture of what they represent. Together we can slowly climb this hill.

You can find more of Ferradans’ videos by subscribing to his popular YouTube channel, Anamorphic on a Budget.

About the author: Tito Ferradans is a filmmaker and the creator of Anamorphic on a Budget, a YouTube channel all about shooting with anamorphic lenses. The opinions expressed in this article are solely those of the author. You can also find more of Ferradans’ work on his website.