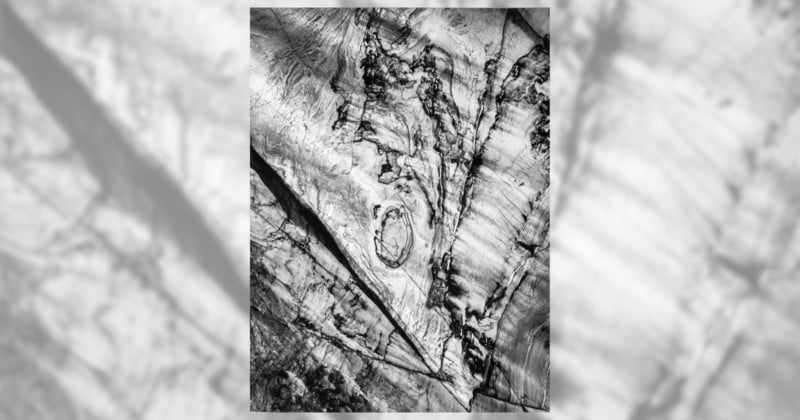 In my previous article, I walked you through the making of one of my signature photographs, Fallen Sequoias, exposed in 1977. I’ve decided to use the same process in the creation of another image, made 20 years later, on a one-day hike with two friends in 1997.

In those days, fully 17 years after discovering Antelope Canyon, I was still hoping — perhaps even expecting — to find similar slit canyons because I felt that Antelope Canyon was the discovery of a lifetime (and I still feel it was, to this day). It turned out that Hackberry Canyon was not one of them. So, with the wrong mindset, I hiked all day with a degree of disappointment that the canyon was not what I had hoped it to be.

Despite my disappointment in failing to find yet another slit canyon, I was still open to the idea of finding things of photographic interest, even if they weren’t what I was seeking. One of those things that grabbed my attention was a nearly flat canyon wall with subtle humps and bumps and troughs and ridges and black lines superimposed upon a very light, almost white, section of wall. I found a pattern that tapered to a point, standing out from the rest not because it jutted out in front of the adjacent wall (it didn’t) but because the shape was so distinctive. Somehow the tapering shape reminded me of a spinning top. Furthermore, the subtle parallel humps and depressions that crossed that section of wall reminded me of glacial tracks I had often seen while backpacking through the high lake basins of the Sierra Nevada Mountains.

So it resonated with me and I exposed a 4×5-inch Tri-X negative on that interesting section of wall. Later, after developing the negative and making a contact proof of it (I make contact proofs of every negative I expose, giving me something to study at leisure), I then carefully evaluated its potential to print to my satisfaction.

First, let me note that I make all of my contact proofs at exactly the same contrast level, all rather low contrast. That allows me to see as much detail in the proof as possible, whereas a high-contrast proof could easily lose detail in either the highlights, the shadows, or both. So, I fully expect the contact proofs to look rather dull, lacking the snap I’d want in the final image, but I want them to give me maximum information about what I have to work with on each negative. I then try to envision the steps needed to put the life back into the final print, when I study and evaluate the proof print.

This contact proof didn’t excite me. It failed to give me the feeling that I could put the tonal qualities into the final print that I wanted, which were the qualities that would make it “sing.” So I set it aside and forgot about it. Recently, reviewing old contact proofs, I ran across this one. Who knows why, but this time I felt the possibility was there to make the print I originally wanted but had previously dismissed.

One reason could be the enlarging paper I’m using today, Fomabrom, made in the Czech Republic. I’ve worked with excellent papers in the past, but this is the finest enlarging paper I’ve ever used. Perhaps I saw the possibilities in that contact proof because of the Foma paper, and the way I’ve learned to work with its remarkably rich qualities. (Yes, I’d recommend it for any darkroom printer…and I’m not on the payroll to say that!)

The other reason might be the greater sophistication of my evaluation, along with accepting that Hackberry Canyon wasn’t the slit canyon I had been hoping for. (It’s possible that I set it down years ago because it didn’t satisfy my desire to find another slit canyon.)

So, this time I decided to seriously evaluate it. I cropped the negative slightly but at an angle, thus eliminating a few bothersome details in two of the corners. Perhaps those corners were the things that made me set the negative aside years ago, and perhaps I never thought of cropping the image at an angle but this time the angled cropping made a huge difference. Over the years I have found that careful cropping is very effective in improving the quality of an image. So, although I always want to use the entire negative, I never hesitate to crop to improve the final image.

In the darkroom I print to get the shimmering tones in the triangular section that tapers to the point at the bottom of the image. Then I burn the two lower corners at much lower contrast to darken them perceptibly from the brighter center portion. Not too much darkening; not too little; just the right amount to allow the center to stand out from the two lower corners. Finally, a little selective bleaching helps to highlight the shimmering qualities in the oblique, parallel humps, and depressions in the sandstone wall, giving it a metallic quality. 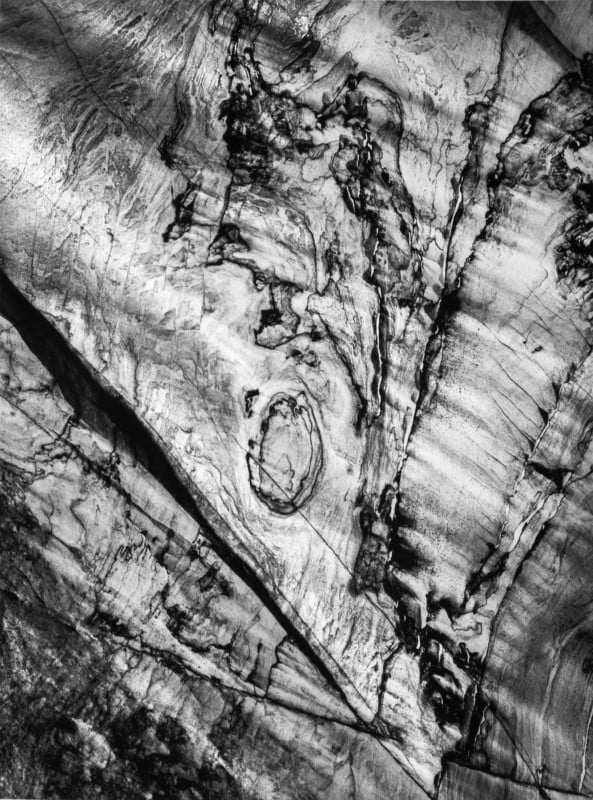 It’s surely an abstract image. I imagine it’s one that some viewers will be attracted to, perhaps studying the many little details, whereas others will turn away from it quickly, seeing little of value. It’s a fact that some people simply do not find abstract images attractive. Others are attracted to the enigmatic qualities inherent in abstraction. I find it very attractive, and that’s the most important thing to me in deciding to print or display any image. The salability of the image is of no importance because I found long ago that neither I nor the gallery owners who have displayed my work were ever able to decide in advance whether or not a photograph had real sales potential. So, I simply evaluate how strongly I feel about it. If it resonates with me, I’ll show it and discuss it at my workshops, or have it displayed in a gallery exhibit. That’s my sole consideration.

This article is courtesy of ELEMENTS Magazine. The ELEMENTS is the monthly magazine dedicated to elegant landscape photography, insightful editorials and fluid, clean design. Inside you will find an exclusive and in-depth articles and imagery by the best landscape photographers in the world such as Charles Cramer, Christopher Burkett, Hans Strand, Rachael Talibart, Christian Fletcher, Charlie Waite, and Steven Friedman, to name a few. Use the PETAPIXEL10 code for a 10% discount off the annual subscription.