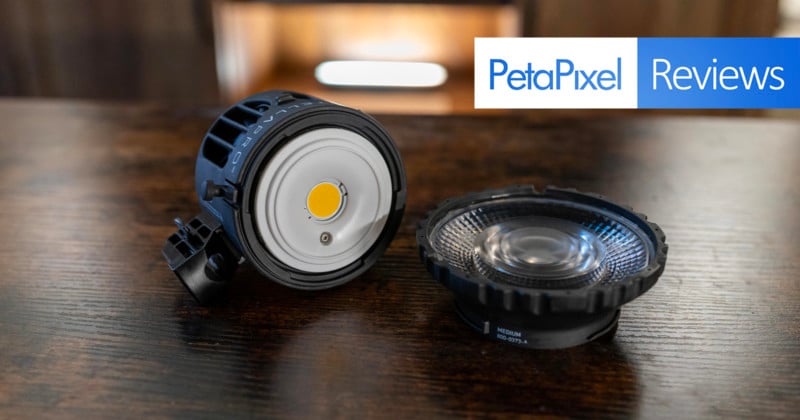 There have been a lot of interesting light solutions for creatives released in the last few years, but they were either a slight improvement over a previous generation (like the Profoto A1 to A1X) or something to serve a niche corner like the Lumee from Spiffy Gear. Nothing has been really groundbreaking… except perhaps for the StellaPro Reflex from Light and Motion.

Released earlier this fall, the StellaPro Reflex is a 100-watt equivalent hybrid LED monolight and strobe that was designed to be useful for both photographers and videographers at the same time through a single high-powered source.

The system is modular, very portable, and capable of putting out light continuously for 30 minutes at full power and up to 10 hours at low power (or 15,000 full-power flashes) on a single charge, and can capture up to 20 frames per second (fps) with the Reflex S as a strobe without missing a single frame. While it is not the most powerful light of its size on the market, it definitely has some of the most variable and versatile uses, arguably making it one of the most well-rounded light solutions for sports, action, events, and weddings since it can be used as a one-light setup for both video and photo situations, swapping between both use cases quickly and seamlessly. 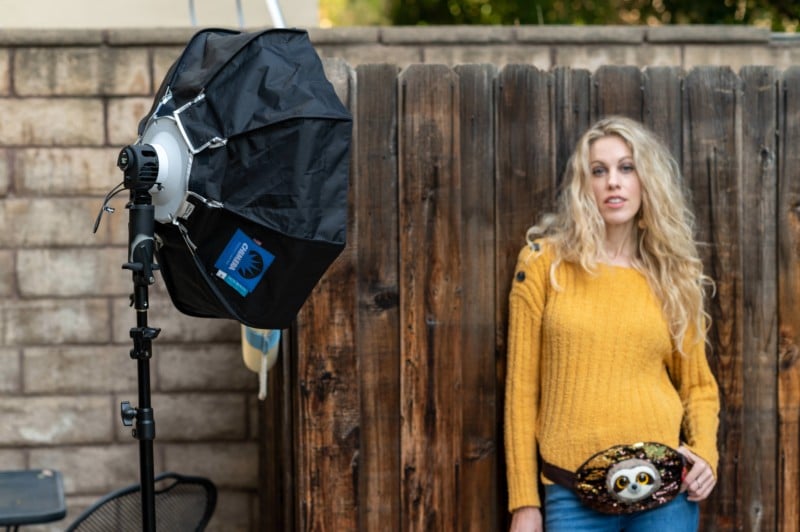 The new Reflex and Reflex S lights are impressively small and lightweight which makes them ideal to travel with. The light head itself can fit in the palm of your hand and just needs a USB-C connection to power it up. Below the light head is a sort of cold-shoe mount that can be adapted in several ways for a variety of different mounting solutions, from a camera hot-shoe, to a variety of lightstand combinations.

It works well, but the only thing that concerns me with the design of the mounts is largely plastic. While this keeps the weight of the product down, the mounts require a perfect fit to ensure it has “clicked” and is locked in, and in more extreme temperatures (hot or cold), this could prove to be problematic. Especially with heavier modifiers attached to the system, it feels as though the system is a bit precarious and could come tumbling down.

That said, the company promises that the light is incredibly durable, capable of withstanding drops of up to one meter without incident. While I did not want to personally test this feature, it is a bit reassuring to know that if there ever was an issue it would likely survive the fall in most situations. And while I had fears of collapse, none ever presented themselves in real-world use cases. 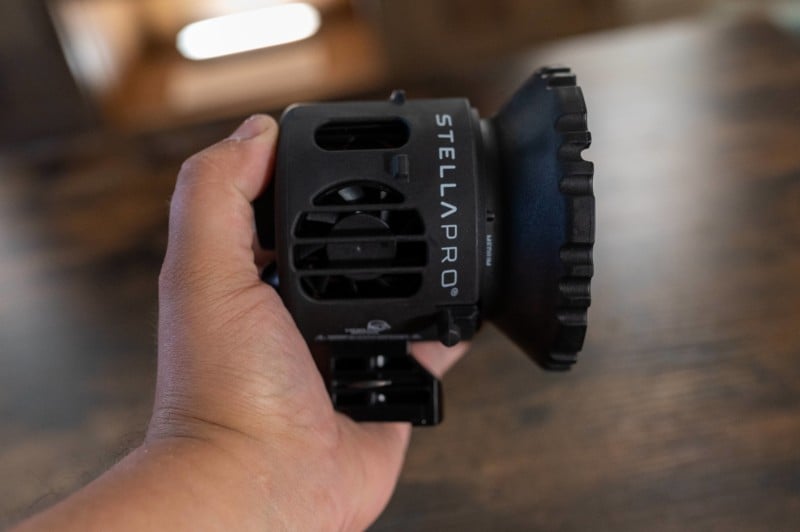 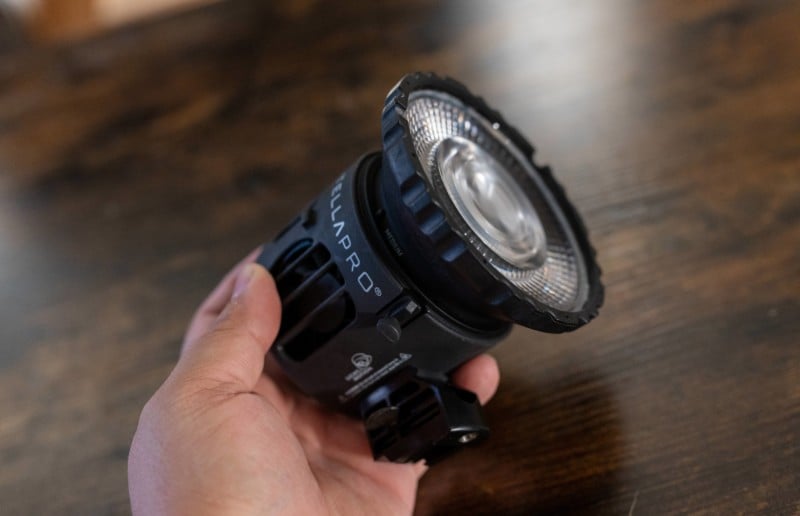 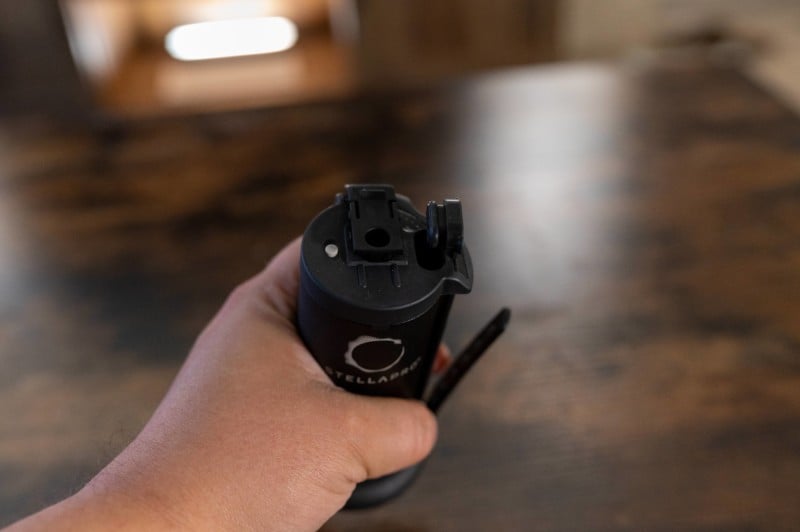 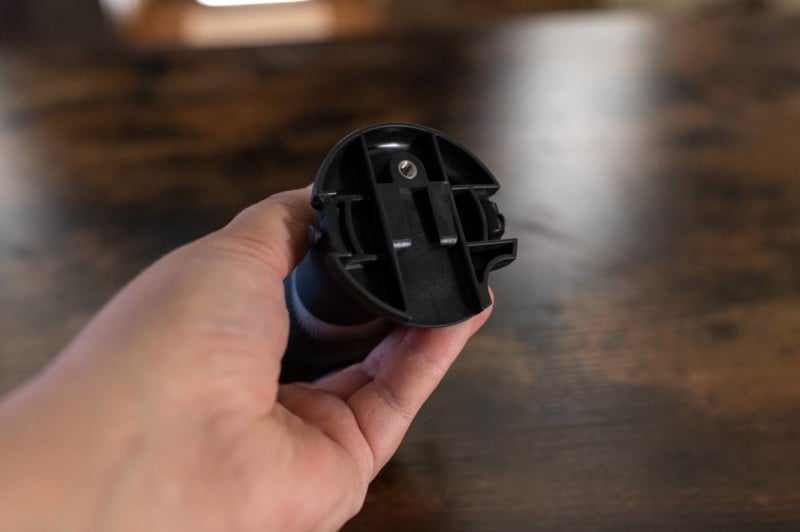 Another element that I was less of a fan of in the product design is the way the adapter works for mounting the light onto a light stand. You have to put the system together and then screw it on using a supplied hex tool. My issue isn’t the stability or security, but with the workflow. Ensuring the battery is securely mounted to the light stand isn’t exactly fast, so if you have to make quick changes, this will pull you out of your zone for a moment — especially since the screw can be easily dropped and lost. 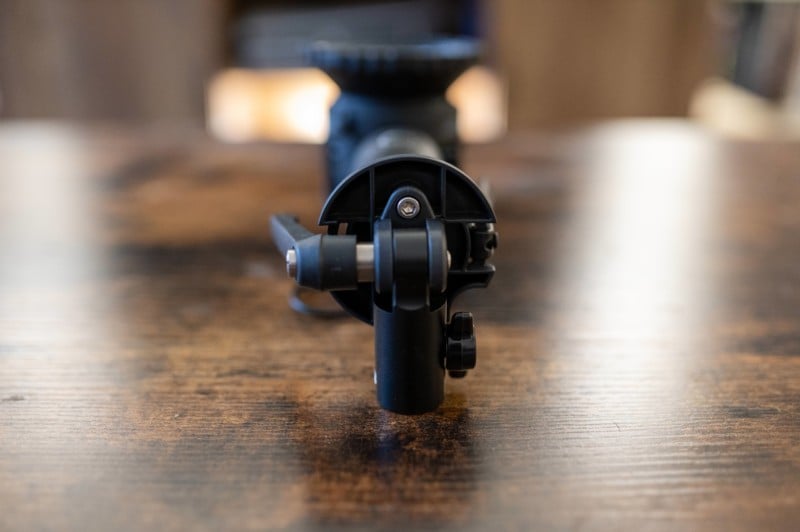 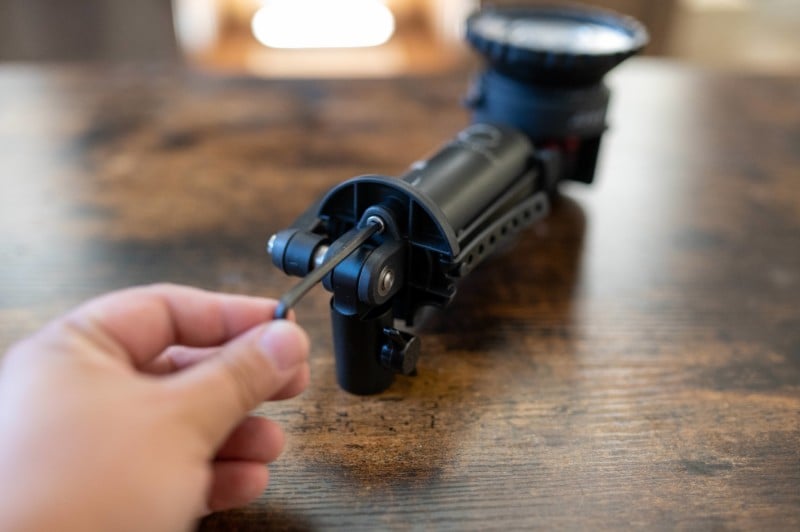 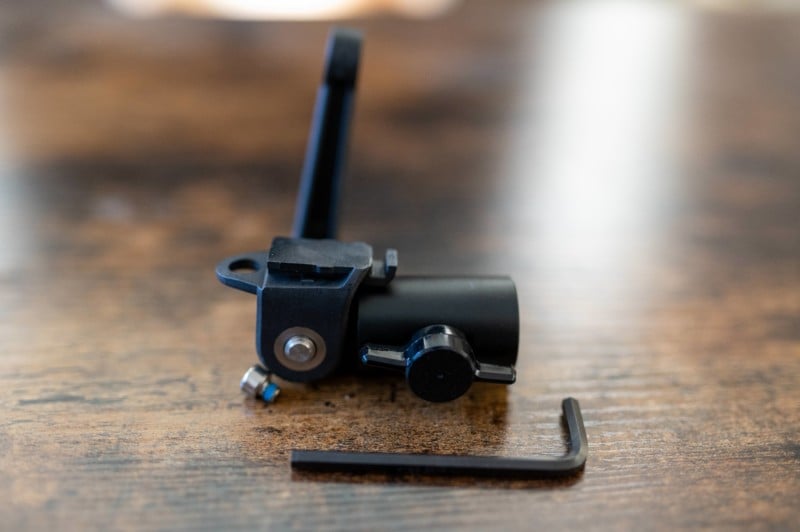 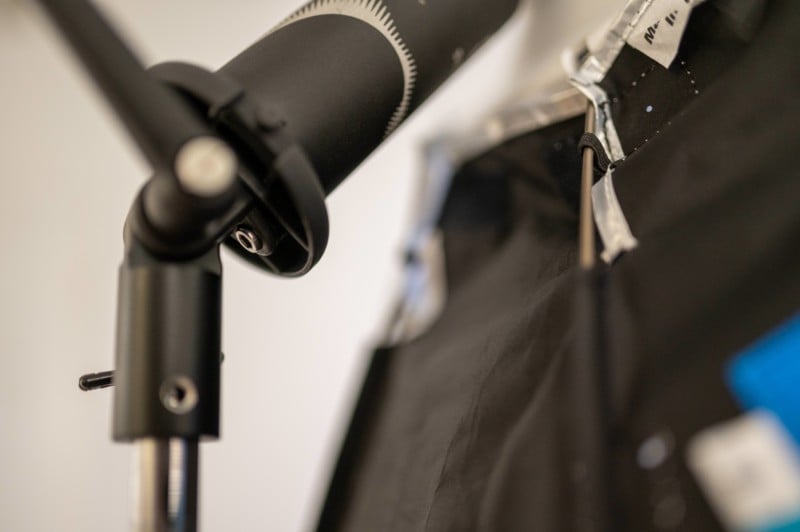 The company also states that the lights are IP65 rated for weatherproofing, meaning you could potentially use these lights in a heavy rain or snow situation. This is something I was unable to test, but it does have me wondering how accurate this is and I’d love to see some actual footage from people using it in wet scenes. The light has exposed grates for a fan and cooling, and while my initial thought is to hide these lights from anything weather-related because of them, Light and Motion’s promise of weatherproofing has me wondering if the way they work is akin to air conditioners, which have external fans that sit in the weather without issue despite all the electronics.

The Reflex and Reflex S are designed to be used with a variety of modifiers and accessories and are capable of working with nearly any shooting scenario. For this review, I simply used the light bare-bulbed or with a Chimera Beauty Dish that was provided by Light and Motion. In my testing, I found that mounting and adapting these accessories was very fast and easy perform.

One thing to keep in mind is no matter what setup you plan to use, ensure the magnifier (fresnel) accessory is placed back on the light once you’ve attached whatever modifier you plan to use. The lens is critically important when it comes to overall light power, so it’s a must. The instructions do not explicitly say to do this, so in my first tests with the beauty dish I left the magnifier off and the light output was surprisingly low. 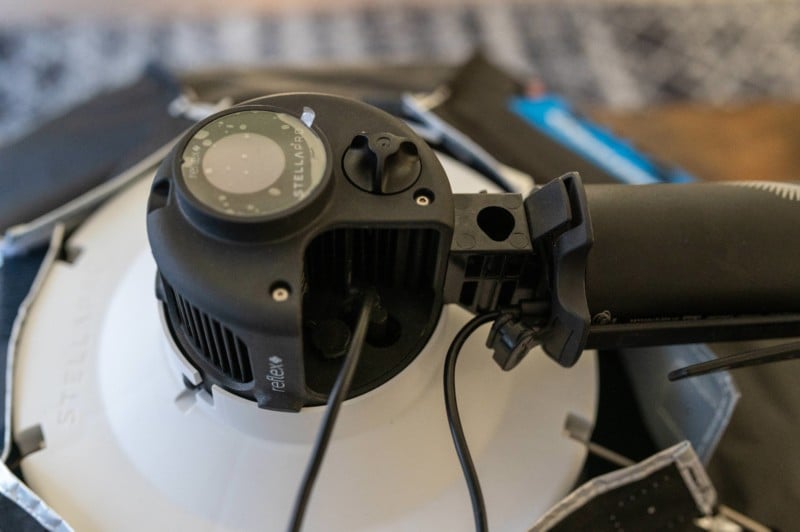 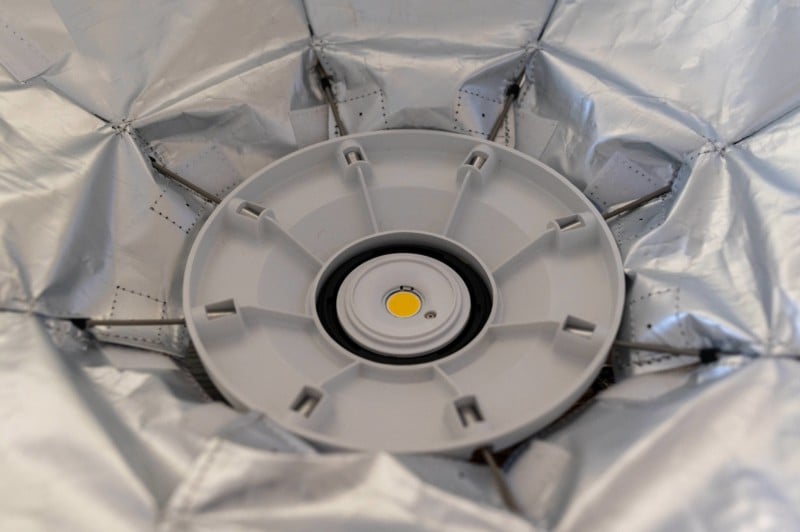 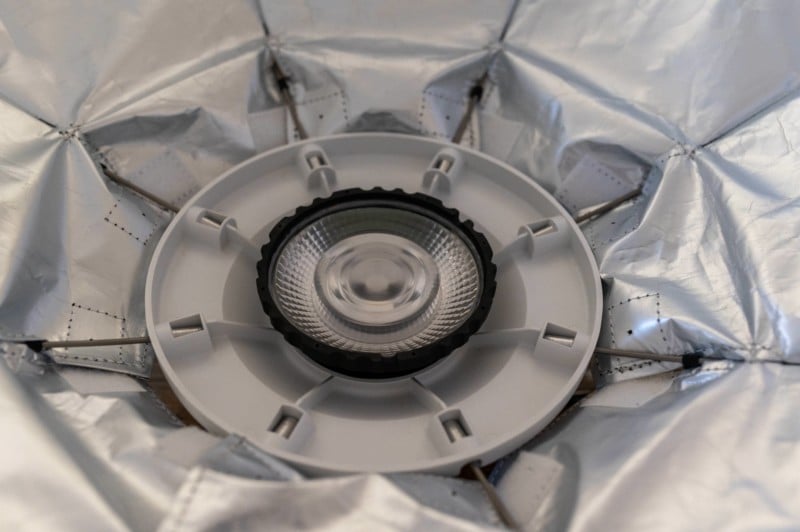 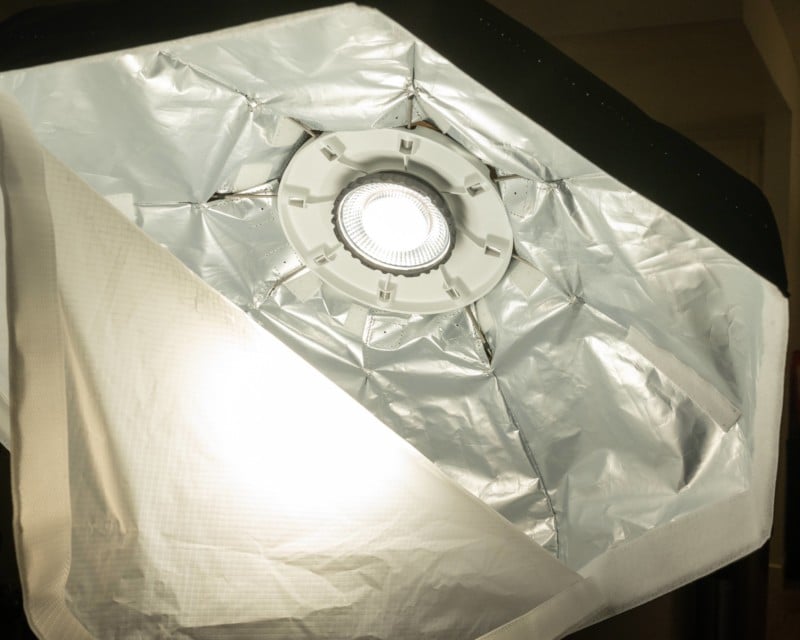 The last major concern I had with the Reflex light is the size and positioning of the power switch and menu buttons. The power button on the battery pack is small and positioned very close to the cold-shoe mount which I found makes it awkward to get to when the whole setup is mounted on a light stand. Additionally, the dial/button for making changes to the strobe or continuous power levels is somewhat awkwardly placed and can therefore be cumbersome to make quick adjustments to the power levels. 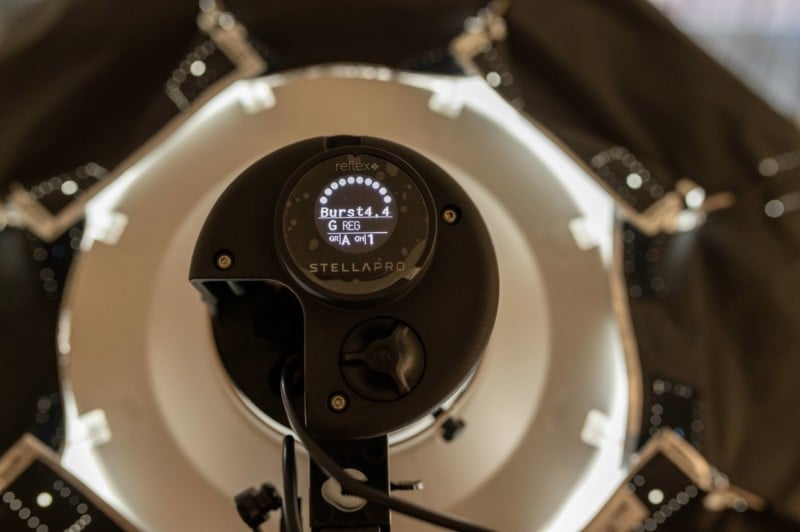 All these quibbles are relatively minor, but still worth pointing out. 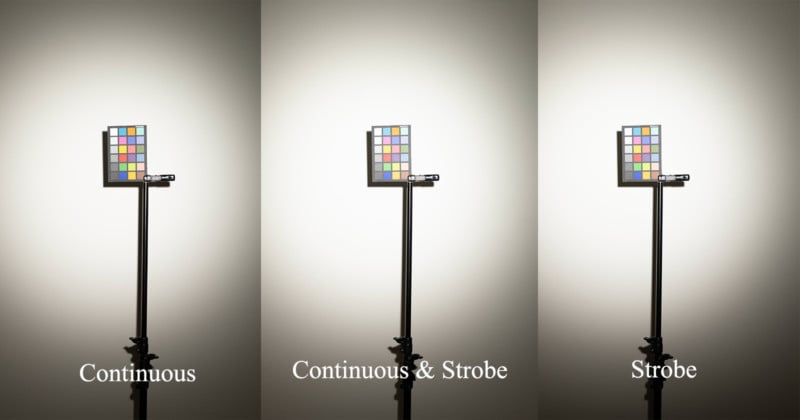 As a monolight, the Reflex S can output about 86,000 lux at a one-meter distance while using the spot optic with a color temperature of approximately 5,600 Kelvin. The light (when used as a continuous source) can be dimmed all the way down to 100 lumens making it useful for controlled ambient light sources in the video as well. Especially when paired with gels to recreate daylight temperatures or certain mood colors for the theme of a video. That is a good point to make: the light’s color temperature is not adjustable.

Gratefully, I did not notice the color temperature of the light change with variations in power. If there is any change either warmer or cooler, it’s to such a minor degree that it doesn’t affect real-world use.

As mentioned above, the StellaPro Reflex and Reflex S can hit speeds of 10 and 20 frames per second respectively. The system is capable of firing continuously without any dips in power even in high-speed sync, which ensures that during action moments, you’ll never miss the shot.

To test this, I left the Reflex in strobe mode and started firing in high-speed burst for about 70 frames with my Nikon Z6 (see gif above) and not once did the Reflex miss a shot. Seriously, not one single frame dropped. While the light may not be as bright (on its own) as some other systems on the market, it is wildly impressive in its consistency in burst fire. This is performance that no other brand of lights I have tested so far have been able to do.

Using the Reflex S, it is possible to get over 15,000 full power strobes on a single battery charge, or up to ten hours of continuous light. Additionally, the lights can be powered with any 100W USB-C power source meaning that if the supplied battery happens to run out, you can keep going by using another USB-C source.

Another feature of the new Reflex system that had me very impressed was its ability to work well with other brands of lighting, including Godox and Elinchrom (we expect support for Profoto in the future as well). Meaning, it is possible to set the light to be triggered using any of these brands of RF remotes and have the light work in tandem with those respective brands. This makes it extremely easy for creatives to expand their already existing light kits with the Reflex and avoid the issue of feeling as though they have to start over from scratch.

It is also worth noting that when operating the light in the 4,000 lumens and above, the cooling fan will kick in and it is surprisingly loud for such a small system. It is comparable to a gaming laptop fan when kicked into high gear, and the high-pitched “whirr” can sometimes be difficult to ignore, especially indoors. This is not really an issue for photographers, but videographers might find it annoying to work around when filming in a quiet environment.

Below are a few images I captured using the Reflex S as the light source. 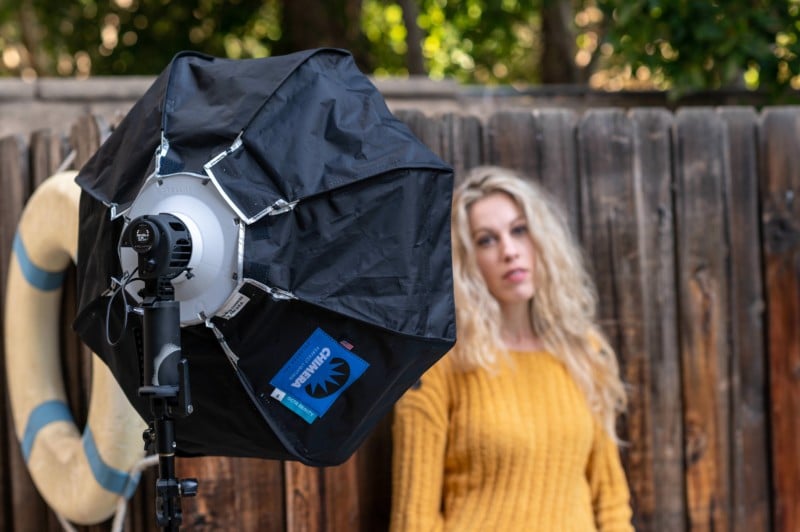 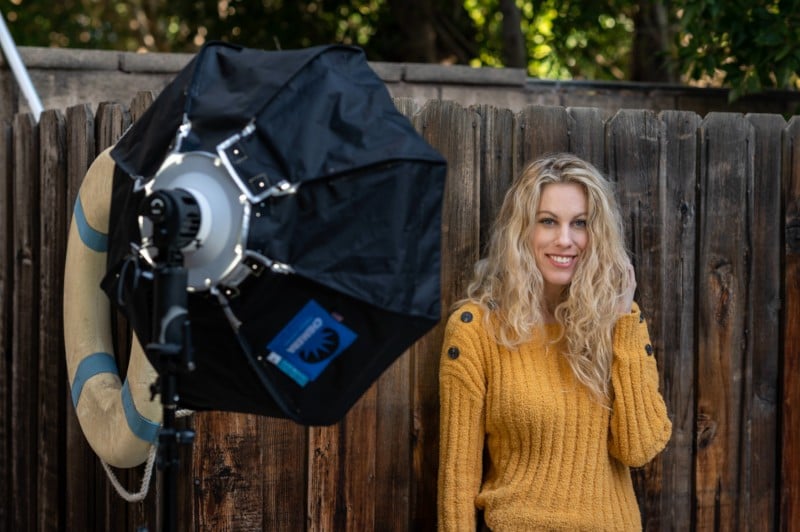 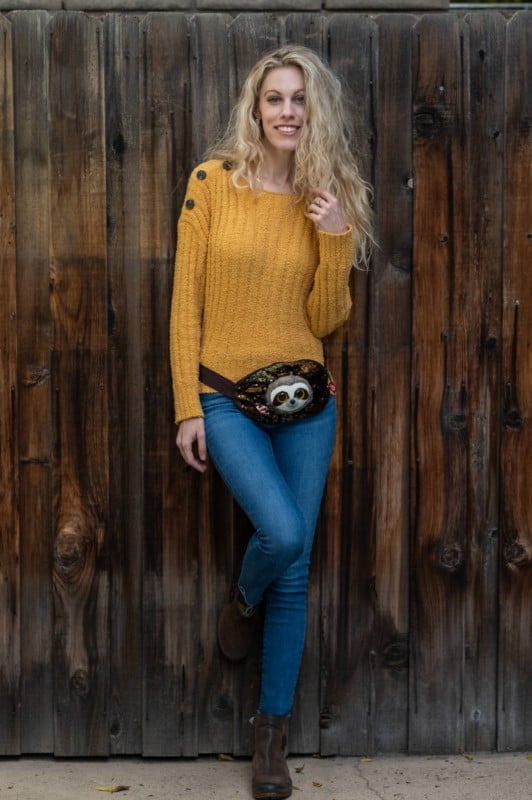 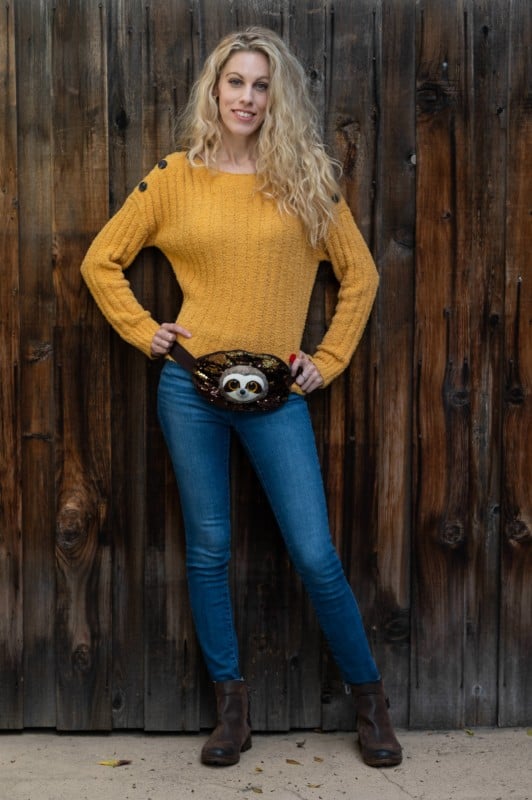 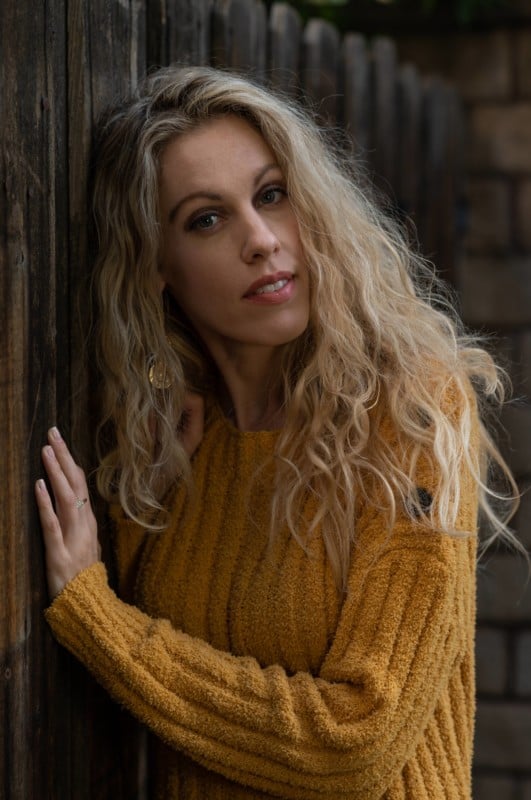 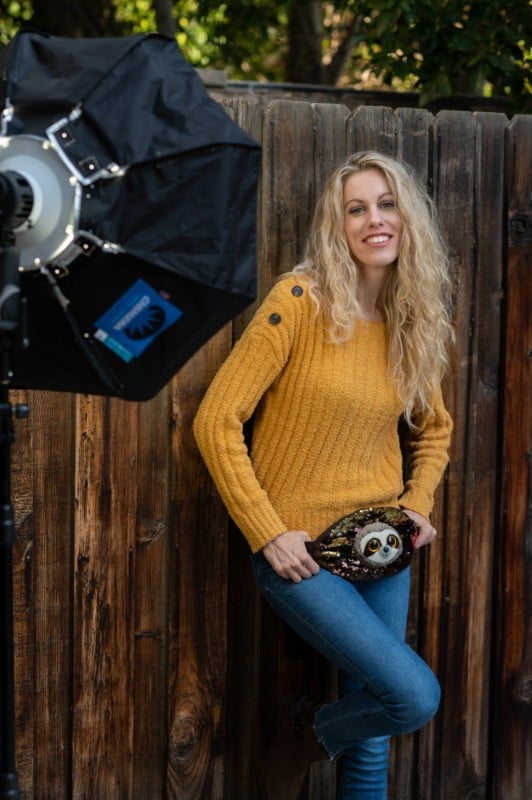 Jack of All Trades: A True Hybrid Light

Light and Motion have managed to make a pretty impressive light that does a lot of things very well, but doesn’t quite excel as the best in the category. Its strobe performance is really good and offers incredible reliability, but is underpowered compared to high-end strobes or speedlights that rely on a classic flash tube. Conversely, the light output for video is great, but the sound of the fan can be a hindrance.

It’s the classic jack of all trades, master of none situation, and for many that’s is going to be more than ok. What makes the Reflex system so desirable is that it’s both a stills and video lighting system in one. No continuous light that gets as bright as the Reflex also offers the ability to strobe and stop action like it does, and no speedlight or strobe offers the ability to assist video productions to the level it does. Usually, a hybrid shooter has to carry a system for both situations, but the Reflex is really the first time a product effectively solves that problem without making too many sacrifices to get there.

All the issues I had with this light centered around minor issues with the build quality, but I don’t think these should deter anyone who wants the performance that these lights provide. Perhaps Light and Motion will make some hardware adjustments in the future to address my concerns, but it’s hard to argue with what the lights let hybrid shooters do. From that perspective, these are a win.

The Rotolight AEOS and NEO 2 have been around for a while and both offering dual-use as strobe and mono lights, however, these lights require a Rotolight Elinchrom EL-Skyport Transmitter Plus that costs about $250 USD (as compared to the cheaper $69 Godox triggers that the StellaPro Reflex can use). Additionally, they aren’t a single light source, they’re much larger, and the power of the Rotolight offerings is a lot lower than what the Reflex offers.

Godox and Profoto also have sort of similar offerings with the Godex FV200 that retails for $299 and the FV150 for $259. The Profoto A1X AirTTL costs about $695 USD. The Profoto A1X is a more powerful on-camera flash that does not offer the continuous light power the Reflex and Reflex S can, but it does keep up and “outshine” the light in strobe power and brightness. You’ll have to decide what is more important to you. 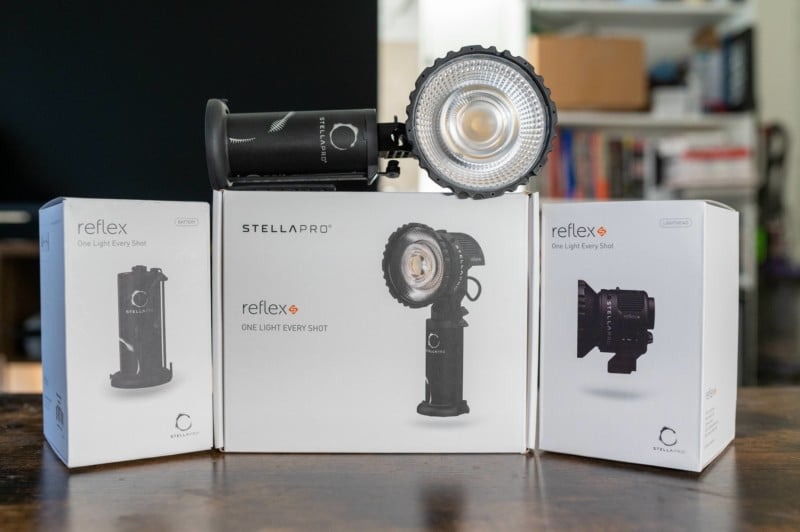 If you are a hybrid shooter who needs to be able to swap between photo and video applications quickly and often, absolutely yes. Anyone looking to perfectly solve the lighting needs of either a photo or video set will find things they don’t like about the Reflex system, but those who need the flexibility it offers will want to work with nothing else.