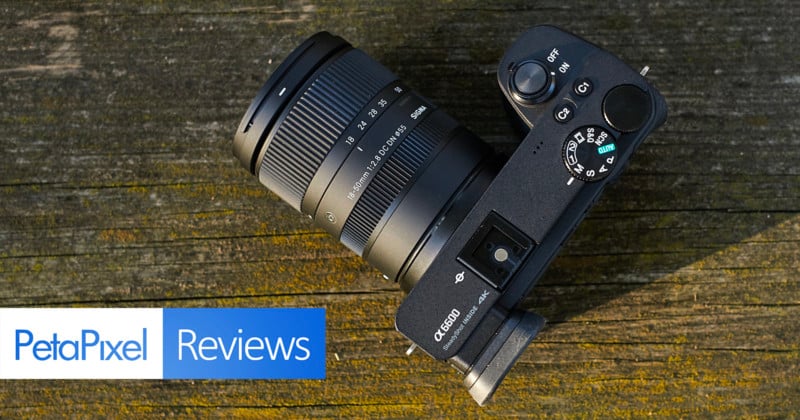 With Sigma’s latest release, the company is going back to basics to deliver a standard wide-to-telephoto zoom lens for Sony E-mount and Leica L-mount crop-sensor cameras. Does it have any flash or is it nothing more than a simple kit lens?

The first thing that struck me about the Sigma 18-50mm f/2.8 DC DN Contemporary when I unboxed it is how small the lens is. Admittedly, I don’t use APS-C lenses often. Still, having a healthy zoom range from fairly wide to fairly tight and a constant f/2.8 aperture made me expect something larger.

It measures 2.9 inches (74.5 millimeters) long and only weighs 10.2 ounces (290 grams) and has a diameter of 2.6 inches. When zoomed to 50mm, the lens does extend about another inch in length. Overall, it’s a nice-looking compact lens made from Sigma’s favorite Thermally Stable Composite that matches perfectly with the Sony a6600 I paired it with for this review. 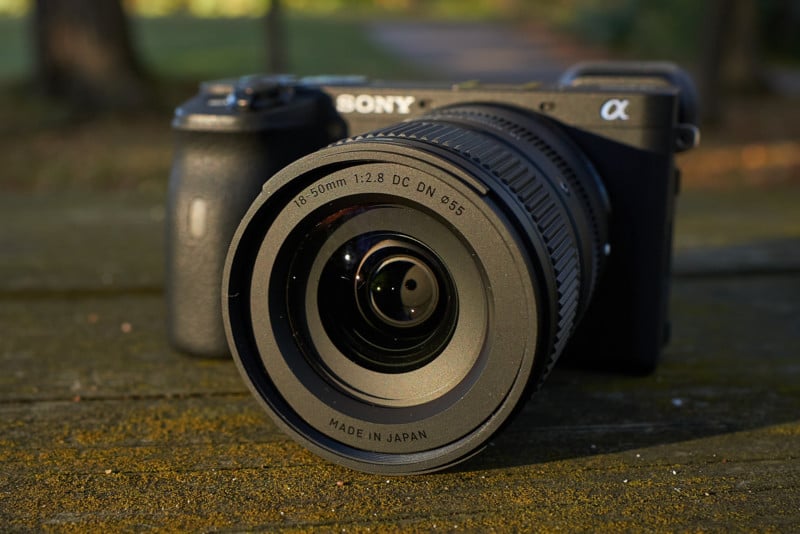 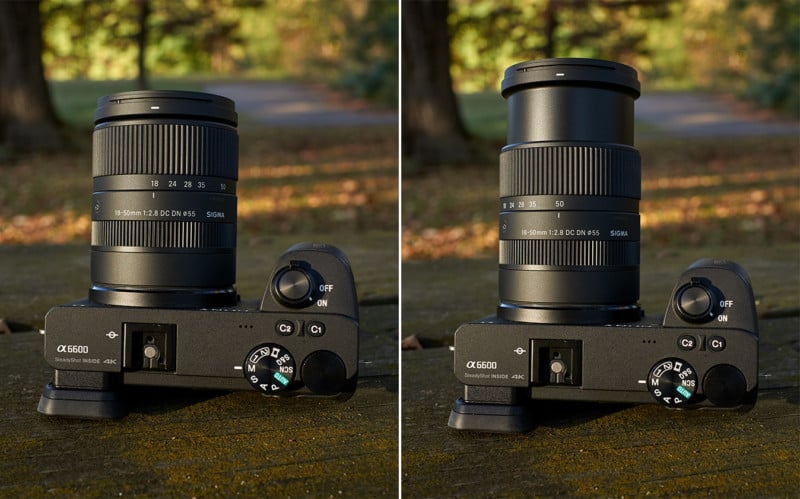 The rubberized zoom ring has an appropriate amount of tension to it and combined with the fact the front elements of the lens are not very heavy, there was no zoom creep while walking around. The focus ring is only plastic with no rubber but it does have a smooth twist to it as well without much noise or grinding.

Unfortunately, there are no further controls to the outside of the lens such as a customizable focus hold button or AF/MF switch. However, it would be hard to find room for any of these with the current design. Sigma clearly favored compact size here. 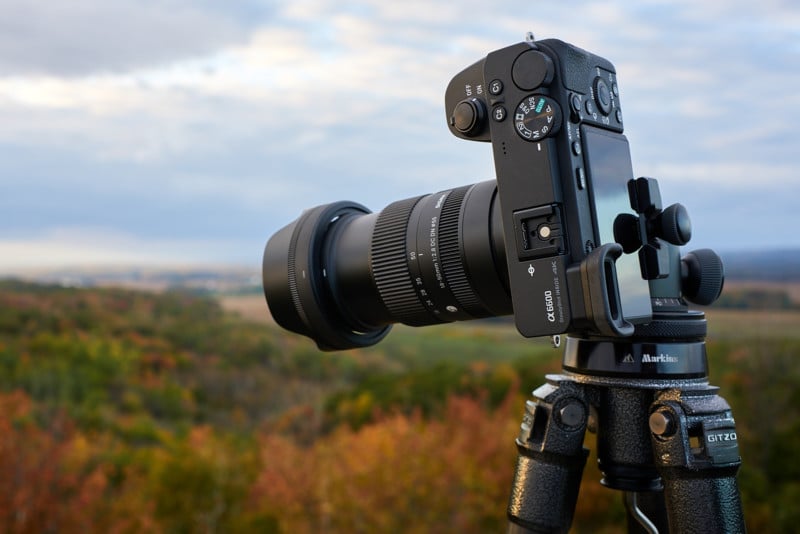 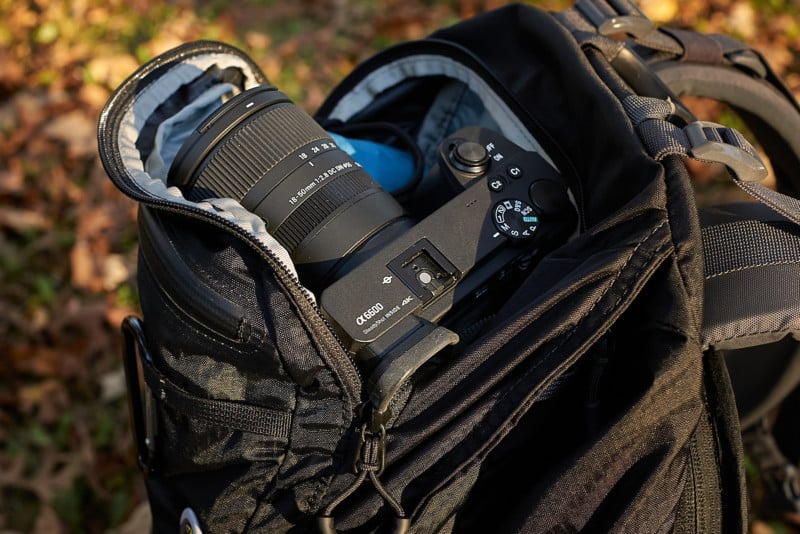 On the plus side, the Sigma 18-50mm has been at least partially weather sealed seeing as the lens mount has a rubber gasket to prevent water splashes or dust from seeping in there.

Taking a look inside the lens, we find 13 elements in 10 groups, including one SLD and three aspherical elements. Throughout testing, it was common to see lens flare ghosting anytime I shot into the light with the lens stopped down. There’s also a fair amount of color fringing throughout the zoom range when shooting high contrast objects and it becomes more severe toward 18mm.

Sigma says that color fringing is mitigated internally through the camera, but also stipulates it depends on the camera and results may vary. 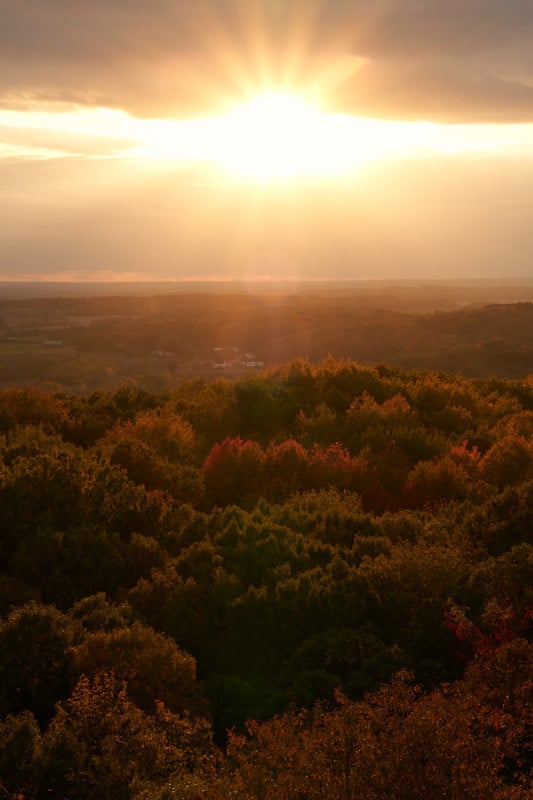 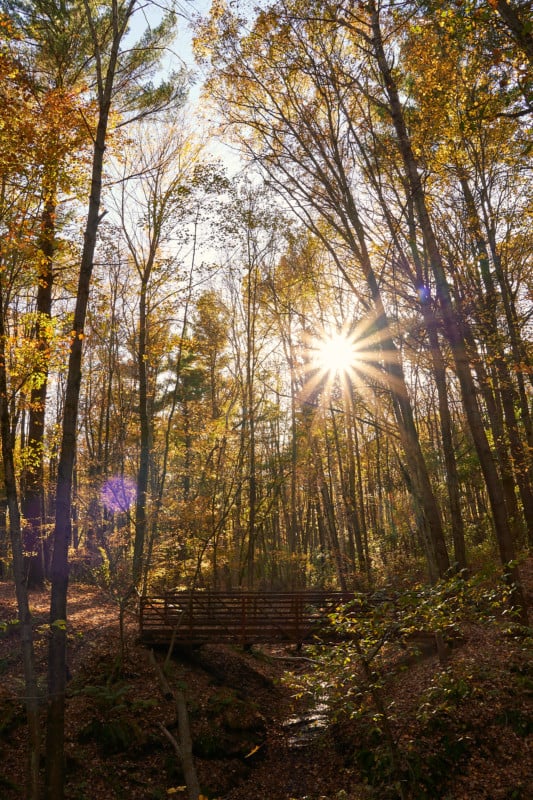 Reviewing the sharpness of the lens, I found that in the center at 18mm it was sharpest at f/6.3. Wide-open at f/2.8 the performance was fine but does take a good positive leap in sharpness after just one-third stop down to f/3.2. The drop between f/20 and f/22 is also dramatic, with f/22 being extremely soft. At the edge of the frame at 18mm, it was again sharpest at f/6.3.

With in-body lens corrections turned off, I took a look at what kind of vignetting this lens has before the exposure is normalized. At 18mm, the vignetting is quite severe when shot wide open and would obviously need a lot of correction to get the exposure looking consistent across the frame. By f/5.6 the vignetting is relegated to the corners and at f/7.1 it largely clears up.

On the 50mm end, it shows about a third-stop improvement over 18mm across the board, and vignetting largely clears at f/6.3. With in-body lens corrections turned back on, you may not have to pay attention to the vignetting as much, but it’s still good to keep in mind as far as autofocusing near the edge of the frame or the added noise you will find there from the exposure increase.

Next, the out-of-focus areas in a photo shot with the lens are not terrible, but not mouthwatering wonderful either. Edges don’t just melt away, and I can see it produce some harder outlines in the backgrounds of images. To me, it’s right on the border of what I’d consider being busy and distracting without actually falling off the edge.

Autofocus was an area that I was overall happy with the results. The Sigma 18-50mm uses a stepping motor and in a quiet room, the chirping of the autofocus drive can be noticeable but it’s nowhere near the worst I’ve heard. Otherwise, its ability to keep up with tracking subjects on the Sony a6600 deserves some credit. At both the 18mm and 50mm ends, I did not have many continuous burst shots that missed focus.

Another impressive element of the lens is its ability to focus closely. At the 18mm end, virtually anything in front of the lens is fair game to achieve focus — just watch out for the glass making contact. Even at 50mm, close focus is only a few inches out from the front of the lens. Imperfections such as color fringing really stand out at these close ranges, however, and stopping down the aperture to compensate is critical.

The Sigma 18-50mm f/2.8 is a compelling lens due to its small size, great autofocus performance, constant aperture, and sharpness. The image quality does slip in some areas — such as strong light sources in the frame that cause ghosting or its color fringing on high contrast objects — but for $550 all this matches expectations. 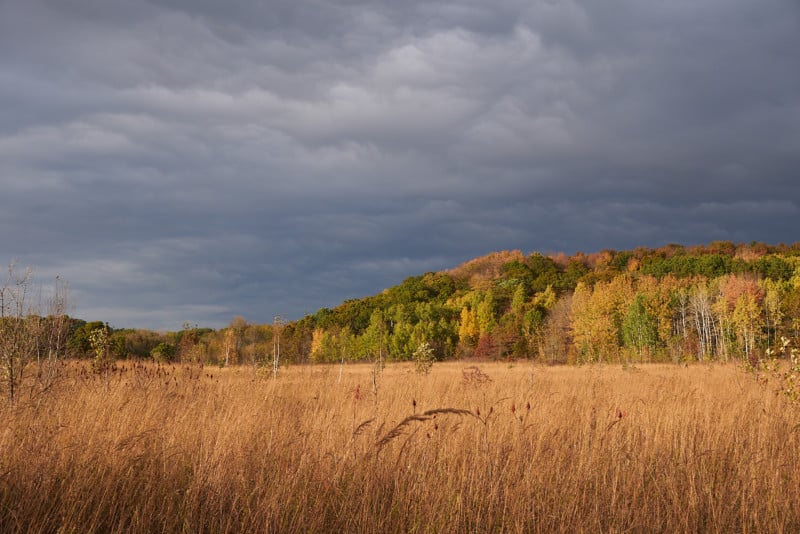 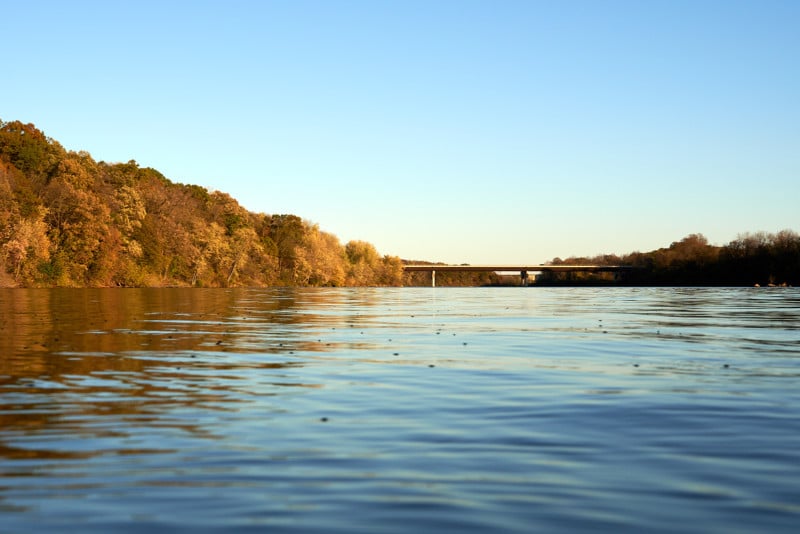 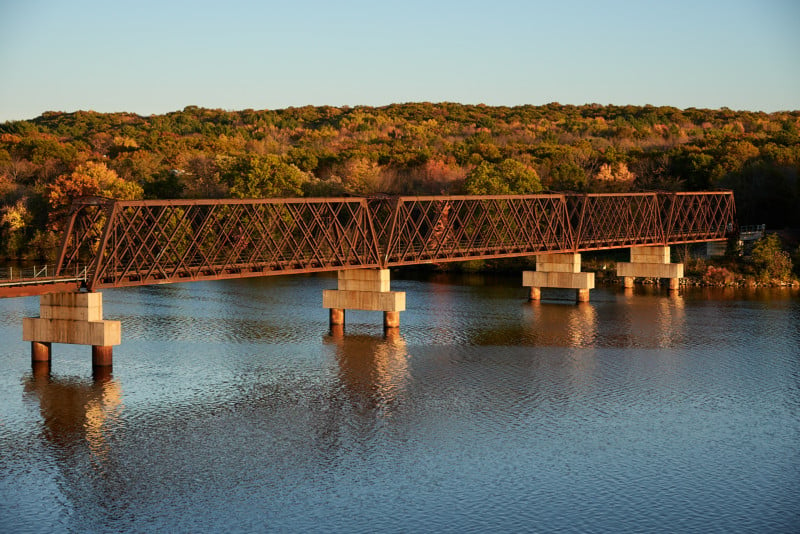 It’s probably no coincidence that Sigma doesn’t have any true parallel competition as far as a combined package of the zoom range, constant f/2.8 aperture, and pricing for this lens. Sigma did, after all, bill it as the smallest and lightest f/2.8 lens on the market.

Opening up the criteria a bit, there is the Sony PZ 16-50mm f/3.5-5.6 OSS kit lens that is cheaper at $300 and has lens stabilization and power zoom, but it’s slow, and the image quality from when I’ve used it does not compare to the Sigma. 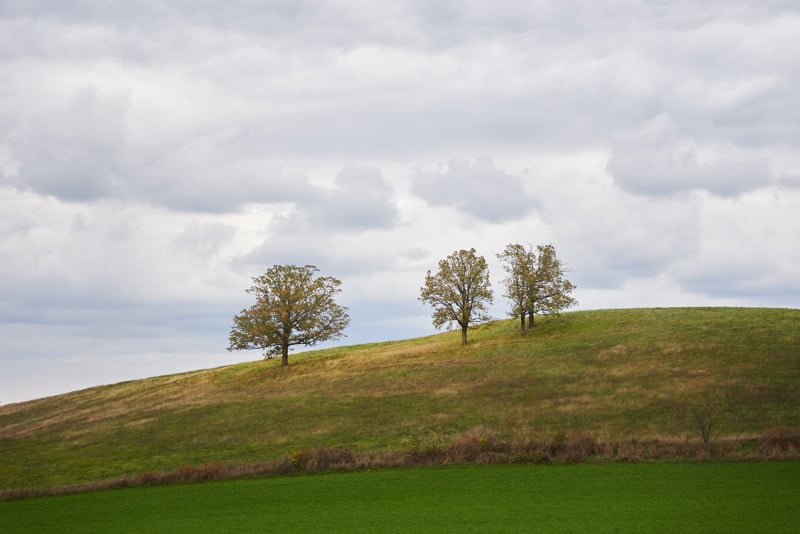 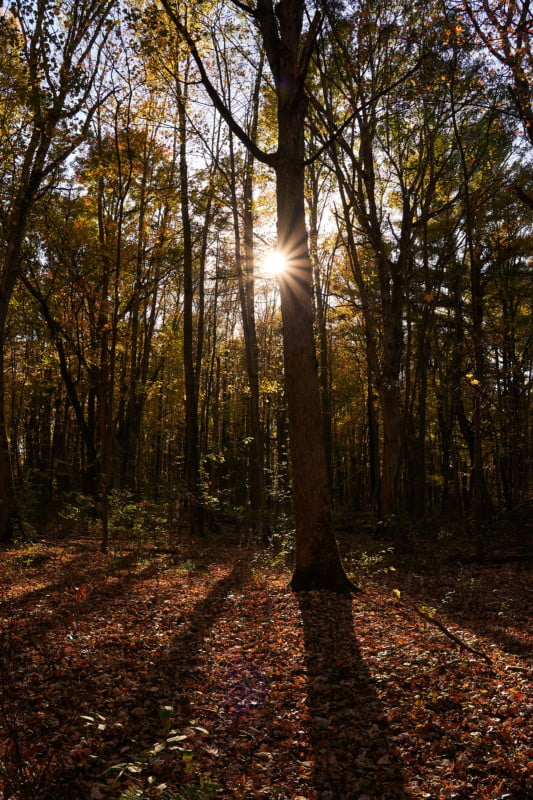 Yes. The Sigma 18-50mm f/2.8 DC DN Contemporary lens is not without its faults, but none are complete dealbreakers. It does deliver strongly in its autofocus, sharpness, and size, and I think good enough in image quality for its price to make it worth buying.