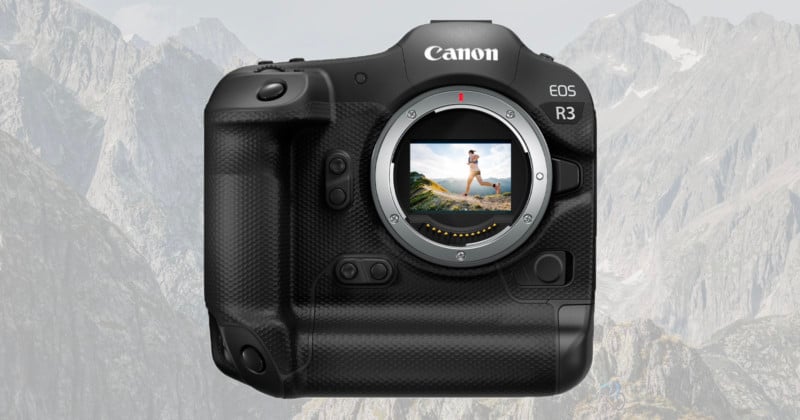 As a Canon Ambassador, I had the opportunity to work extensively with a pre-production version of the new Canon EOS R3. This article isn’t a test report, but rather, a report on my experiences with the camera, and an account of how it compares to my current EOS R5.


This report is based on my real-life work as a professional photographer. My focus is primarily on the photography-related features.

I’ve been working with nothing but mirrorless cameras since 2018. For two years, all of my shoots were done using the EOS R. With last year’s introduction of the EOS R5, I discovered everything I’d ever wished for in a single camera. 20 pictures per second with a resolution of 45 megapixels, an unbelievably accurate autofocus, all bundled into a small and light housing.

As an outdoor and sports photographer, I couldn’t have asked for anything more.

Now the EOS R3 is in the starting blocks. I’ll be going through the advantages and disadvantages of the R3 as compared to the R5. The EOS R3 is clearly not positioned as the successor or a replacement to the EOS R5. But because I never worked extensively with the 1D X Mark III and my DSLR camera era ended three years ago, I’m only going to compare it to the EOS R5, my workhorse for the last 14 months.

My goal is to answer the following question: Will the EOS R3 replace my R5?

I usually work with the mechanical shutter on my EOS R5. First, I like the tactile and audible feedback when I’m taking shots. Second, 12 photos per second is generally all I need. But there are times when I switch over to the electronic shutter, so I can get even more photos out of my camera.

The EOS R3 offers an even bigger increase in continuous shooting speed. Now, I can take up to 30 photos per second. This is especially useful for the following in my line of work:

For your classic pan shot with a slow shutter speed, even I, as a professional, end up with a lot of rejects. Moving the camera as quickly as the subject not only requires a lot of practice, there’s also an element of luck. The more photos I take, the bigger my chance of having one really clear photo in the series.

Working with a Fast Lens

If I take action shots with an open aperture, like RF 85/1.2, then my depth of field is extremely small. Despite the super-fast autofocus, a few photos in a series might not be 100% sharp. Working with 30 photos per second substantially increases the number of sharp photos.

Quite often, the action takes place in a split second, no more. 30 pictures per second ensures that I don’t miss a single moment and that I capture that perfect instant.

Other Benefits of the EOS R3 over the EOS R5

Virtually no more rolling shutter effect with the EOS R3

Until now, this effect occurred when photographing with an electronic shutter, as the image is scanned sequentially, line by line. In my work, the rolling shutter effect of the R5 never had a negative impact, as I never work with quickly moving, straight lines (like golf clubs, airplane propellers, or helicopter rotor blades). However, the EOS R3 almost completely eliminates the effect and now the problem never occurs. This doesn’t affect me or my work, but this can be very crucial to other photographers.

The EOS R5’s top shutter speed is 1/8000th of a second, whereas I can shoot at up to 1/64000th of a second with the EOS R3. The only reason I might need faster shutter times is when I’m taking photos in a very bright environment, at f/1.2. Even if I use the lowest ISO setting of 100, I reach the 1/8000 limit, and there are a few times that I would have liked to have been able to shoot at faster than 1/8000. If you don’t have a lens that is that fast and take photos with an aperture of f/2.8 or more, you’ll rarely find yourself in a situation where you’ll need shutter times of more than 1/8000s.

Benefits of the EOS R5 over the EOS R3

The huge number of photos that I shoot in a short time with the EOS R3 makes my work process a lot slower and less manageable. If my finger is on the release for about 3 seconds, I’ll have around 100 photos on my memory card. After a two-hour trail running shoot, I’ll have more than 3,500 photos, all of which need to be downloaded, sorted, assessed, and saved. A lot of the photos look similar and the work after a photo shoot is considerably longer.

My Verdict on the Frames Per Second Function

The EOS R3’s new electronic shutter also has a few other advantages. Personally, the 20 photos per second I can take with the EOS R5 has shown itself to be sufficient, since I almost never photograph unexpected situations, but instead, can communicate with my models and repeat the scenes several times, if necessary.

The performance of the EOS R5’s autofocus was a quantum leap over the EOS R, but also over the 5D Mark IV and all other cameras I’ve worked with. With the EOS R3, Canon once again upped the ante. In addition to the already impressive people and animal recognition system, the autofocus now also detects vehicles, all while covering almost 100% of the frame, at full continuous shooting mode.

It recognizes motorcycles and cars and autofocus captures them immediately. I did a few tests with a motorcycle and the results were fantastic. And what’s even more amazing: As soon as it identifies a person, the autofocus system switches to the head of the driver. Even if the driver turns away from the camera so that all you see is the back of the helmet, the autofocus continues to track the driver’s head.

Likewise, when shooting with a maximum aperture of f/1.2, there are almost no unfocused photos, even when the subject is moving.

Canon also improved the algorithm for the people and animal detection mode, thus also improving performance. Even if the athlete only fills a very small portion of the frame, the AF immediately tracks the eyes and sticks to them, even if the person is approaching quickly. I like to shoot against the light and do so often. Autofocus keeps tracking the subject, even when exposure compensation is set to +2.

Almost none of the photos I took at a zoo were out of focus. In addition to birds and cats, the EOS R3 deep-learning algorithm also detected giraffes, camels, bears, and other animals.

My Verdict on the Autofocus

In my line of work, most of my subjects are moving quickly, and the photos have to be sharp and clear. The results I was getting with the R5 were already outstanding, but the EOS R3 definitely raised the bar, and is a nose ahead of the EOS R5, especially with respect to the new vehicle detection mode.

Oh, and there’s one feature on the R3 that I fell in love with immediately and wished I had on my EOS R5: the small, touch-sensitive AF selection button that was introduced with the EOS 1Dx Mark III. This lets me shift my AF point around the entire frame in split seconds, simply using my thumb.

On the other hand, the one thing I didn’t test enough was the feature of controlling the AF point with my eyes. My subjects move too quickly, or they sometimes start off being too far away for this to work. It would take a certain amount of time to get used to the eye-controlled focus feature, and I feel this would be better suited to other situations (like photographing people) as compared to the types of photos I take.

Other Features and Advantages of the R3 Over the R5

Although the electronic viewfinder in both cameras have the same resolution and the same refresh rate, I had the feeling that the colors were more accurate and the action was more fluid with the R3. The R3’s viewfinder was more comparable to an optical viewfinder than that of the R5. This became particularly apparent when I switched back to the R5 after a week.

Plus, the EOS R3 displays the depth of field correctly, whereas the R5 didn’t have this feature. The EOS R3’s electronic viewfinder therefore more realistically simulates an optical viewfinder.

With the EOS R5, I by far exceeded the number of shutter releases specified by Canon in accordance with CIPA standards. Even in the cold of winter, I was able to take more than 2,000 photos with a single battery. Naturally, the EOS R3’s large battery lets you take even more photos.

I don’t know what the manual says, but for the trail run shoot on a morning, I used just under half of the battery capacity after taking close to 3,500 photos. Under normal conditions and use, a battery should easily keep its charge for an entire day out on the field. Here, the EOS R3 clearly outshines the R5. 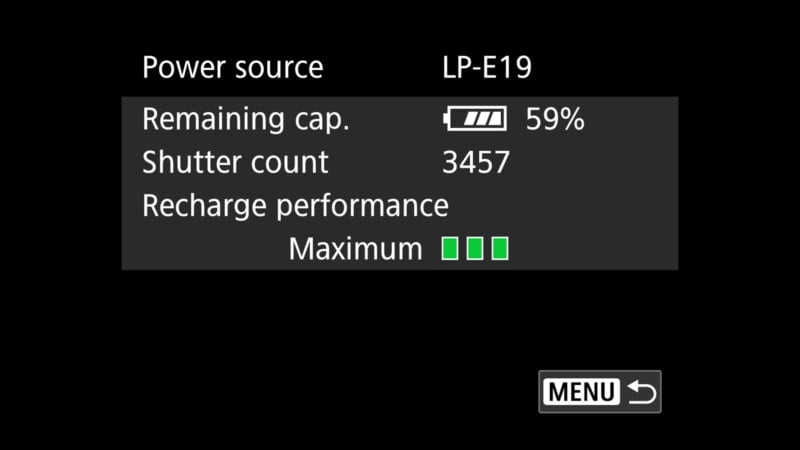 Anyone who’s had to transfer photos while at a live event will appreciate the smaller file sizes. I’d often reduce the file size on my R5 if I needed to quickly transfer photos.

The lower resolution of the EOS R3 makes it possible to improve ISO performance compared to the EOS R5. If you take photos under poor lighting conditions, you’ll love the EOS R3.

Benefits of the R5 over the R3

The light weight and small size were some of the key reasons I chose to sell my EF system in 2018 and fully transition to the mirrorless RF system. When I’m out on an expedition or doing outdoor shoots, I have to carry my equipment for days or even weeks on end. Every gram counts. This is where the EOS R5 continues to outshine other cameras by far. That is also why my biggest lens is just the RF 70-200/2.8.

95% of my contracts involve taking photos for commercial purposes, for brands, tourist destinations, and magazines. My photos are often printed out in large-scale format for trade shows, posters, billboards, or banners. The 45-megapixel resolution of the EOS R5 has shown itself to be perfect for this purpose. I rarely need a higher resolution, but a lower resolution wouldn’t sit well with my clients. That’s why I see this as a benefit of the EOS R5 over the EOS R3.

However, considering the technological advances being made in AI algorithms and post-processing, this benefit will soon be a thing of the past. In the future, digital image magnification will continue to improve, and high-resolution cameras will only make sense up to a certain resolution.
I prefer a clean, 24-megapixel photo over a poor, 100-megapixel photo taken on a mobile phone.

The Final Verdict: Will the EOS R3 Replace my R5?

No, the EOS R5 will continue to be my main camera. This is because I’m not considering the R3 as a replacement, but rather, as an addition. For business contracts or expeditions, I’ll continue to reach for my EOS R5. But I’ll put the EOS R3 in my camera bag if I’m at sporting events where I need to snap quick action shots and transfer them immediately.

Also, if I have to make the best of poor lighting conditions, then the EOS R3 would definitely be my go-to camera.

About the author: Martin Bissig is a professional action and outdoor photographer based in Switzerland. The opinions expressed in this article are solely those of the author. Bissig is one of the most published outdoor photographers in Europe and a Canon Europe Ambassador. You can find more of Bissig’s work on his website, Facebook, and Instagram.