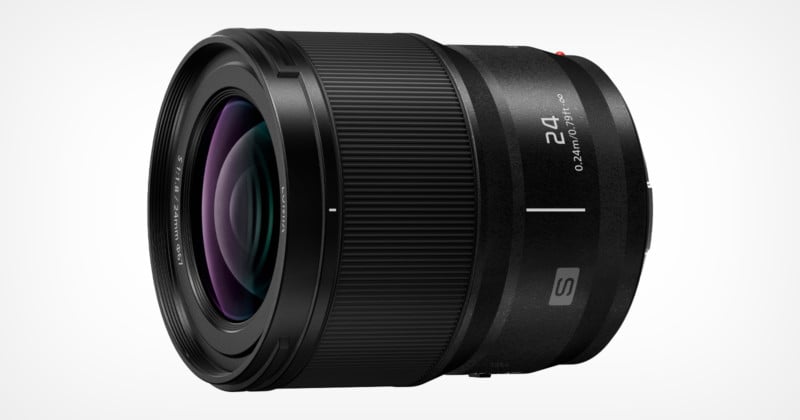 The lens was leaked earlier this week but has been officially announced.

The 24mm f/1.8 joins the 85mm and 50mm f/1.8 lenses that feature a common build size, position of control parts, and front filter thread size of 67mm that Panasonic says provides practical advantages to use. The center of gravity on all three lenses is also similar which the company argues makes it easy to exchange quickly with minimum balance adjustments when the camera is on a gimbal.

The lens is constructed of 12 elements in 11 groups and includes three aspherical lenses, three extra-low dispersion (ED) lenses, and one ultra extra-low dispersion (UED) element. Panasonic says that the use of the three aspherical lenses allows for high “descriptive performance” as well as attractive bokeh. The ED and UED lenses both are designed to suppress chromatic aberration. The company goes on to say that the lens is versatile and will excel in a variety of situations and provides photographers with a pleasant wide angle of view. The lens has a nine-bladed aperture diaphragm.

The wide-angle prime weighs approximately 310 grams, is splash and dust resistant, and can continue operation in temperatures as low as 10 degrees below zero Celcius (14 degrees Fahrenheit).

For focusing, the 24mm f/1.8 is capable of smooth and silent operation that Panasonic says works with its camera’s high-speed, high-precision contrast-based autofocus system that has a sensor drive maximum of 240 frames per second.

In a non-linear setting, focus is shifted with a variable amount according to the rotation speed of the focus ring while focus is shifted with a designated amount according to the rotational quantum of the focus ring for the linear setting. Sensitivity (the amount of focus shift per rotational quantum) can be selected from 90 to 360 degrees by 30 degrees to enable intended focus operation.

As Panasonic’s specialty, the lens is designed to also excel in video applications with a mechanism that suppresses focus breathing, a problem the company calls a “fatal” flaw of nearly all interchangeable lenses designed specifically for photography. Panasonic says the lens also has a micro-step aperture control system that allows it to smoothly change exposure for quality video production.