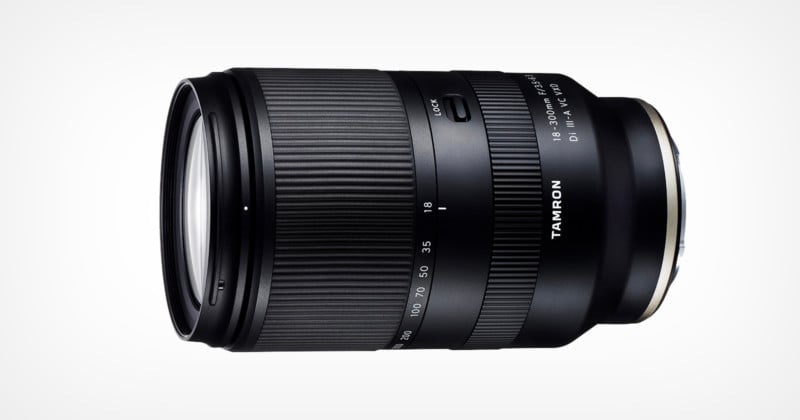 As revealed in July when Tamron originally announced its development, the 18-300mm f/3.5-6.3 Di III-A VC VXD will cover a range of approximately 27mm to 450mm in a 35mm full-frame equivalent.

With this broad coverage, it empowers shooting in a wide variety of situations, including everyday life and travel snapshots, both wide-angle and dynamic ultra-telephoto landscape photography and macro photography.

Optically, the lens features 19 elements in 15 groups, with three hybrid aspherical elements and four low-dispersion elements to suppress optical aberrations. Tamron says that throughout the zoom range, the lens maintains high resolving power from the center to the corners. It features seven aperture blades. Additionally, as most other Tamron lenses for mirrorless cameras, the lens features a unified 67mm filter size.

The lens utilizes Tamron’s VXD linear motor focus mechanism that the company says achieves autofocus speed and precision that Tamron says stands among the best of all all-in-one zoom lenses. The company says it will perform well when tracking moving subjects in focus and is also extremely quiet, allowing it to be used in a wide range of situations.

It has a minimum focus distance of 5.9-inches at 18mm with a maximum magnification ratio of 1:2, which means it performs admirably in up-close shooting situations despite its extremely large optical range.

The Tamron 18-300mm f/3.5-6.3 Di III-A VC VXD will be available on September 24 for $699 for Sony E-Mount, and as mentioned a Fujifilm X-Mount will also be available this fall, with a specific date to come at another time. Presumably, the lens will cost the same for the Fujifilm version.