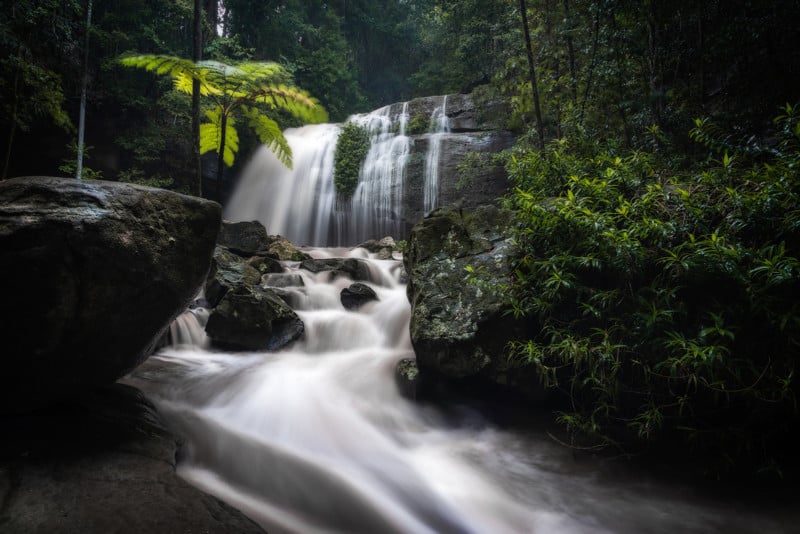 The fascination and beauty of chasing waterfalls never seem to wane and I know I’m not alone and it is not just photographers chasing them. Some of the best times I’ve had in landscape photography have been hiking to a waterfall and then sitting in awe at its beauty as water cascades over rocks. Not only does it look amazing up close, but the sounds of the waterfall are also soothing. Below, I share my top seven mistakes to avoid when photographing waterfalls.

Mistake #1: Leaving Your Tripod at Home.

With modern cameras, mirrorless and DSLR, the image stabilization is amazing and it is possible to shoot waterfalls without a tripod. However, that depends on how slow your shutter speed will be and then how sharp your image will be. The creative decision on how you would like the water to appear in the final image is also determined by using a tripod. As I have mentioned, you can shoot a slow shutter speed with in-camera image stabilization but it will be very challenging to shoot under 1/40s without a tripod. Well, that’s in my experience.

Depending on what creative decisions I’m making infield and how fast the water is flowing, will determine my shutter speed. To ensure I have these options, I always take my tripod with me. I normally work my way from 1/15s down to 1s, sometimes slightly longer, to see how the water textures in the image. I believe it’s important to consider the story I’m telling and that determines the shutter speed for the final look of the image.

For example, if it’s fast-flowing raging water flow I may not want to go anywhere near 1s but I know if I have my tripod, I have that choice. So if you can carry it, don’t forget a tripod!

At more popular waterfalls, I’ve witnessed all sorts of footwear — from men’s dress shoes to woman’s heels. Forget the rocks and falling over, think about the leeches!

Many of my waterfall shots have been at 16mm because you know, isn’t that what an ultra-wide-angle lens is for? The problem with this approach is the waterfall can look small in your scene.

I had a long walk on Sunday morning into a rainforest to shoot a famed waterfall. I knew as it was summer and there would not be much flow. However, I was still keen for the walk and it was a wet, cold morning so there was a chance the flow would be better than expected. The mistake I made here was I took my 16-35mm f/2.8 lens (which I love by the way) and that was it.

When I got to the waterfall, I was overwhelmed by its beauty and I fired off image after image, all between 16-21 mm. Why? I wanted to get everything in the scene in my frame! 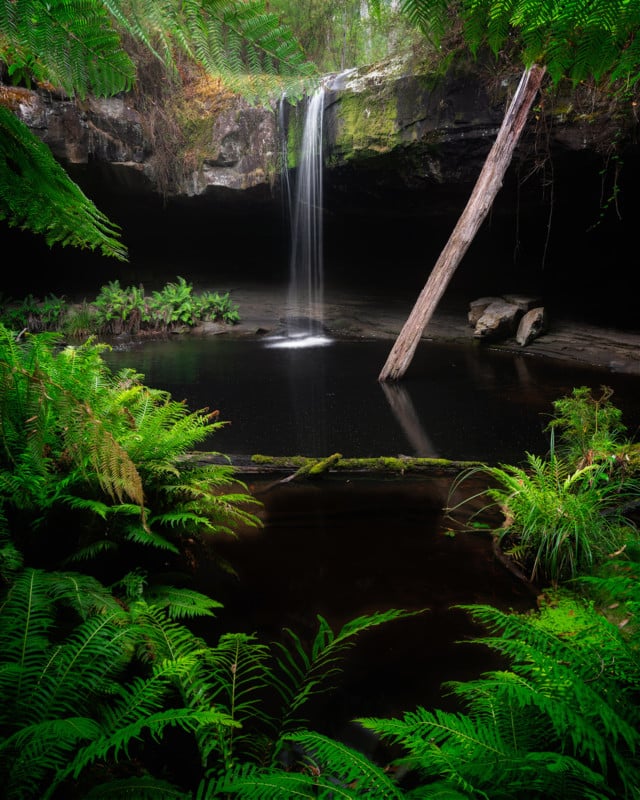 It was unfortunate when I look back at these images now and realize how small the waterfall is in the image (see above). Looks like someone has not only turned off the tap, but it appears far small than the ferns in the foreground and insignificant in the image.

Had I brought my 24-105 f/4 lens, or even my 70-200 f/4, I would have had more options to compose a small scene. I could have isolated part of the waterfall to add mystery to my image and tell a better story. However, this is your own creative decision and what resonates with you as the photographer.

In the image below at Mackenzie Falls in the Grampians National Park, the water was flowing very fast and it’s the largest waterfall in Victoria with very little space directly at the base to capture its sheer size. I could have again used my 16-35mm but I wanted to capture something different from everyone else. The web and social media are full of images of Mackenzie Falls so I chose my 70-200mm f/4 lens and capture this intimate scene at 70mm. 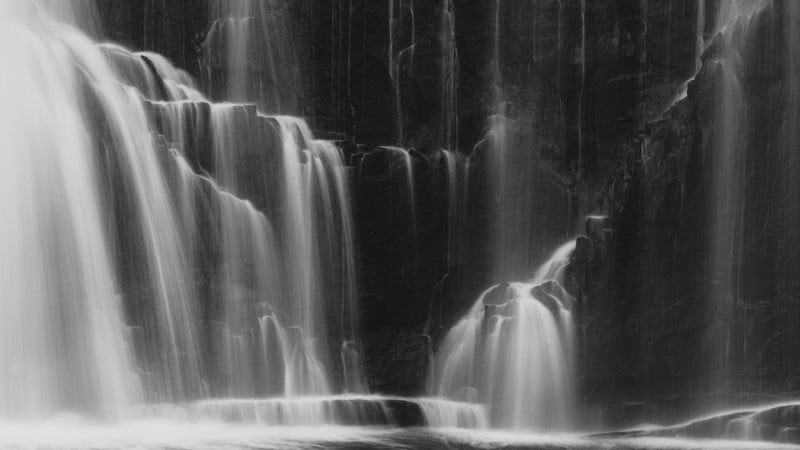 Mistake #4: Using Only One Shutter Speed

For a lot of my early work, I tended to shoot around one second or longer to get the creamy, milky look in the flow of water. More recently, it is my view that texture in the water flow makes a more interesting story, so I tend to shoot faster up to 1/15 second.

You need to experiment in the field to see the impact a slower or faster shutter speed has. That’s the great thing about a mirrorless camera: you can see how the shutter speed will impact the image before you press the shutter. However, in most cases, I take multiple shots at different speeds and then wait until I get home to review which is my favorite.

Usually, I shoot in manual mode starting the shutter speed then aperture (aiming for mid-range f/8) followed by the lowest ISO I can achieve to get the correct exposure. This all depends on the shutter speed first and foremost, then determining which aperture is sharp enough to get the key elements in the frame in focus.

I’m very comfortable increasing my ISO up to 800 if need be to maintain my shutter speed and aperture. However, depending on the scene and how much detail is in the foreground through to the background that I feel needs to be tack sharp, then sometimes I use a smaller f-stop like f/5.6 and focus stack.

Focus stacking is a technique that involves taking multiple images with different focal points in the scene. You then take these images into Photoshop and auto blend them which uses the sharpest parts to convert them into one image.

For the first few years, I always used a three-stop ND filter for waterfall photography. Why? Well, I read it somewhere and I thought all waterfall photographs were captured at half a second — isn’t that how to get the milky water look? In some of my older photos, the result is that it looks like a white mess and doesn’t show the flow of the water and its power. The exposure is too long and this was achieved using a three-stop ND filter.

These days, I mainly use a circular polarizer for shooting waterfalls to reduce the glare of the water and rocks. I could not tell you the last time I used an ND filter for waterfall photography. Important to note here: in 99% of cases I’m not shooting a waterfall in bright midday sunlight. If I was, then I would most likely need an ND filter but I’m an early bird so I never worry about bringing it.

Mistake #6: Not Taking a Second Image with Faster Shutter Speed.

I’ve made this mistake more times than I care to admit. Using a slower shutter speed will give you the effect you looking for in the water but will introduce blur in the rest of the image, especially leave and foliage. Without a doubt, this is the most common mistake I have made and when I get home to look at my images, even if there was no wind, you can almost guarantee I’ve photographed blurry leaves. The waterfall alone is creating wind so paying attention to the leaves, trees, and foliage around the waterfall is critical. For this reason alone, you should take an image at a faster shutter speed (1/100 or greater) that freezes the leaves and foliage. You can then blend this image using layer makes with your long exposure image in Photoshop later.

Mistake #7: Only Shooting on a Sunny Day

That is not to say you can’t photograph on a sunny day. In some cases, the sunlight filtering through the tree canopy above the waterfall can add to the atmosphere. But for even, beautiful subtle light, photographing a waterfall on a cloudy day is ideal. The sky works as a giant softbox giving your scene even light with no harsh highlights. Your colors will be more saturated and get amazing details in the shadows. I’ve photographed waterfalls in both light rain and heavy rain. The image ‘Serenity Storm’ was captured in a heavy downpour and I’ll admit I was concerned about the rising creek level in the foreground at the time, but I would not have captured that image if I had packed up and headed back to the car when it started to rain.

Waterfalls cause a lot of sprays, especially on the front of your lens. Do yourself a favor and remember to bring a cloth to wipe your lens. You will thank yourself later when you don’t have to remove spots from your images! 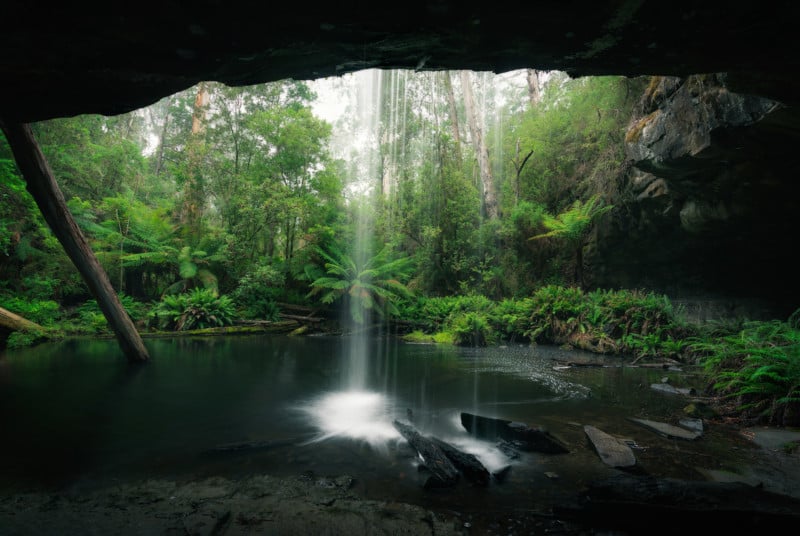 So there you have it, my top 7 (well 8) critical mistakes to avoid when photographing waterfalls. Personally, the biggest mistake I think I’ve made over the years is shooting at a similar focal length and wide (16-24mm). In my opinion, using mid-range focal lengths (35-70mm) and focusing on smaller scenes tell a better story.

About the author: Adrian Rankin is a nature and landscape photographer based in Melbourne, Australia. You can follow him on Instagram, watch his videos by subscribing to his YouTube channel, or visit his website.

This article was also published here.