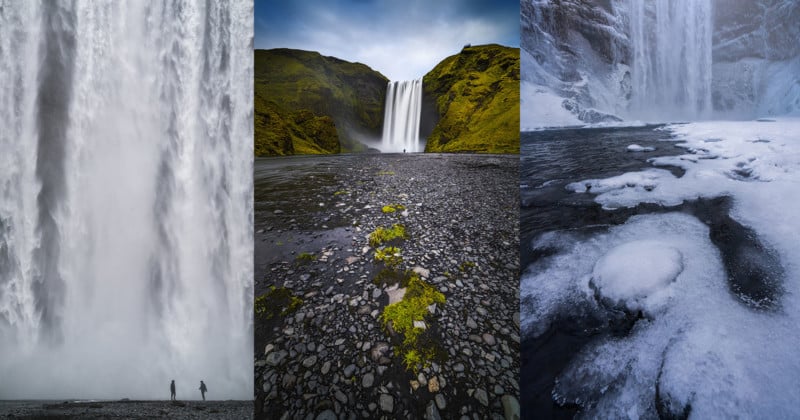 Here’s a straightforward guide on how to get something more out of your waterfall shots. The idea to this guide came to me when I recently visited Iceland again and kept seeing everyone taking the same shots at the famous waterfalls. Even the ‘professional’ photographers with very expensive gear were just planting their tripod in the ground, putting on a wide angle with an ND filter and were all taking the same shots.

Granted, the waterfalls in Iceland are impressive and great to capture just like that, but you’ll end up with a shot like everyone else’s. Here are a few tips on how to get something more out of these amazing waterfalls:

Tip #1. Try using a 70-200mm (or longer) to get up close and capture details. Stand far away from the waterfall so that everything looks compressed. 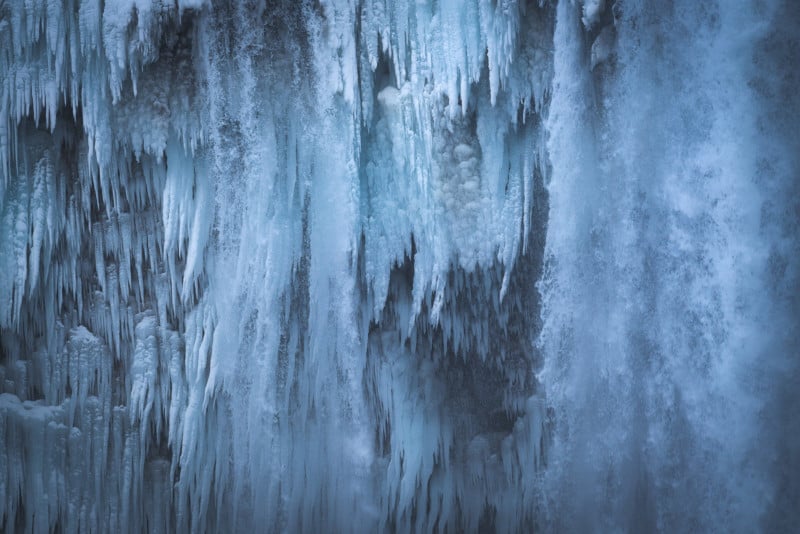 Tip #2. Try going in even closer and capture ONLY the water flow. Use a very high shutter speed (around 1/300 or faster) and a higher ISO if you need. The power of falling water can look amazing just on its own. Try converting it to black & white and increase contract. You will get some really ‘artsy’ results. 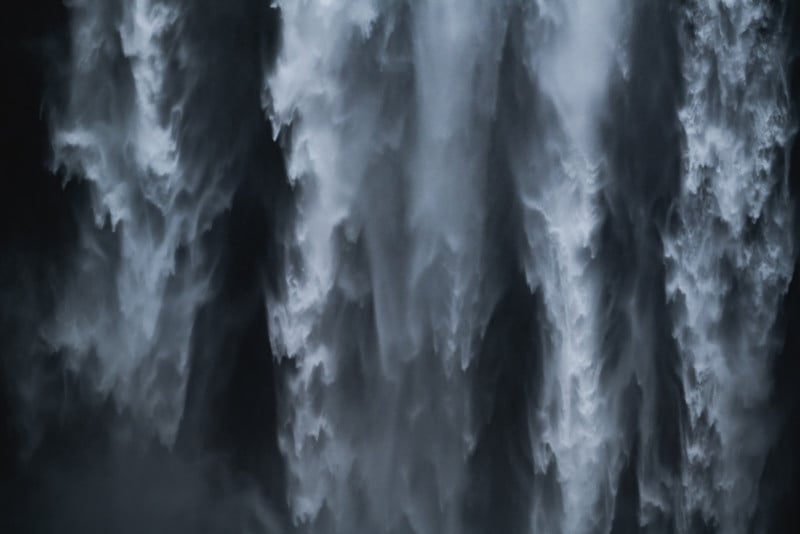 Tip #4. Skies during the day are often boring. Frame the waterfall with a foreground and remove the sky out of the frame. 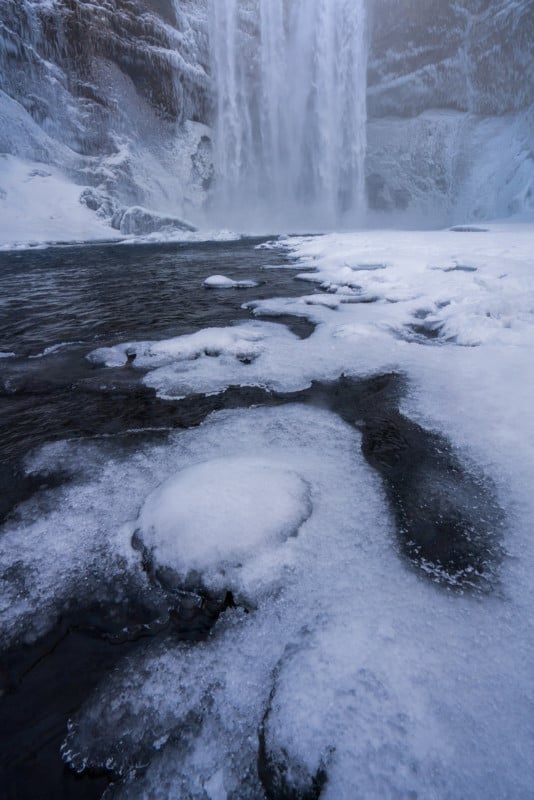 Tip #5. Use a mid-range zoom (24-70mm) and take portions of the waterfall. Pay close attention to your composition. 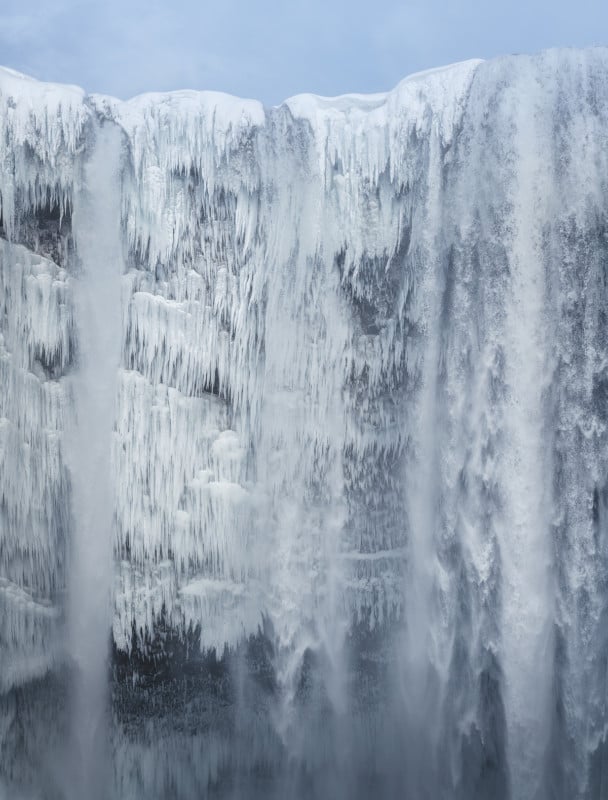 Tip #6. Use an extreme wide angle and pay close attention to your foreground. Foregrounds can be textures on the ground or just a simple rock or patch of grass. Frame something interesting in the foreground and the waterfall in the background. Tip #7. Another trick to include a foreground is to get very low in some grass or some flowers. Use a fast prime (like a 50mm f2 – f/1.4) and focus on the waterfall. Blur out the foreground by using a fast aperture. This can create some cool effects. Tip #8. Scale often doesn’t come across on photos . Use people to show scale on big waterfalls. 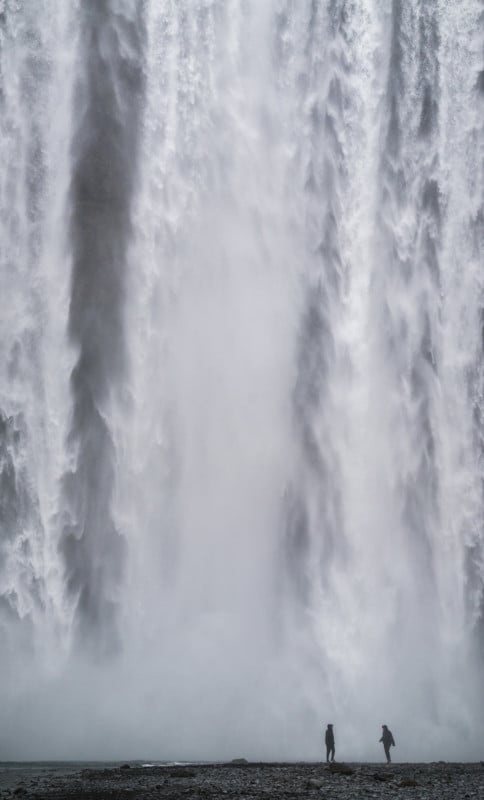 Tip #9. ND filters are great for smoothing water, but try working without them and really capture the power of the water. This can work specifically well with a dramatic sky. Dramatic skies combined with the power of falling water gives you a dramatic result which has a greater impact on the viewer. Tip #10. Have patience and fun. I can spend a great amount of time thinking out of the box at waterfalls by either scouting around with an extreme wide angle for interesting foreground objects or simply taking a 100-400mm lens and slowly moving my lens while looking through my viewfinder, slowly checking around for every detail in the waterfall itself.

All of these pictures (except the one with the blurred foreground) are taken at the same waterfall to show the diversity of shots you can take at a single location. They were taken during a winter and autumn session.

Hope these were useful to help you to capture that ‘not so standard’ waterfall shot in the future!