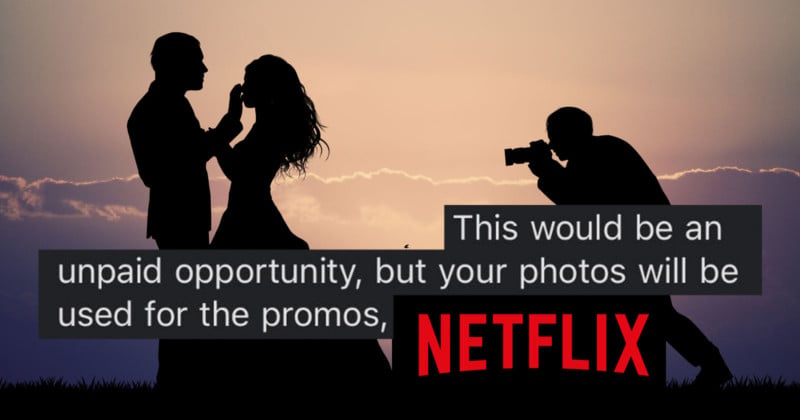 The producers of the Netflix show Love is Blind — Kinetic Content — appear to be currently soliciting photographers to shoot five weddings over the course of five consecutive days that are scheduled for the next season of the show. Unfortunately, the role is unpaid.

The show is best described as a “dating reality” series that mirrors some of the elements of The Bachelor/Bachelorette and Married at First Sight. It follows a group of 30 men and women over the course of a short period where each meets for the first time in a speed-dating-like format where they are not allowed to see one another. The couples can only see each other after the men propose to the women they want to marry, which they only do based on what they have learned over the course of the “blind” dates.

The series ends with full wedding ceremonies unless one of the parties calls it off, with the goal of answering the question “is love blind?”

Love is Blind was one of the platform’s most popular shows in 2020 and became its number-one trending program. The series recorded 1.5 million viewers for the first five episodes and 1.3 million over the following four with a total of 829,000 viewers for the finale episode in its first full week of availability alone. The Reunion episode, which also aired on YouTube, racked up an impressive 1.9 million views. Netflix renewed the series for two additional seasons after reporting that 30 million households had watched the series in an April 2020 Q1 meeting.

Photographer Megan Saul received an email on May 4, 2021 in which a Kinetic Content producer named Natalie asked if Saul would be interested in acting as a wedding photographer for the show.

“I’m a producer for the show ‘Love is Blind’ on Netflix and wanted to reach out because we would love for you to potentially be a wedding photographer for our upcoming season,” Natalie writes.

“Love is Blind is one of the biggest TV phenomenons of 2020 and one of the year’s most watched shows in the world with over 30 million households tuning in,” she continues. “Let me know if this is something you would be interested in.”

Saul was at first excited to hear about the opportunity and responded asking what any professional would in this situation: what was the scope of the request and what was Kinetic Content’s budget?

“You would attend the weddings and take photos. We are doing all of the weddings at the same location. It would be five weddings in total. You would need to be available June 6-10. Times are TBD as of right now. This would be an unpaid opportunity, but your photos will be used for the promos, in US Weekly, People, etc.”

Kinetic Content is expecting a working professional photographer to provide five straight days of coverage of five weddings just for the promise of exposure, which greatly offended Saul.

“What goes into my work is not just my time, my artistic eye, or my ability to capture moments they wouldn’t be paying me for,” Saul wrote in a Facebook post. “To give you a highlight: My camera gear ($35k+ and any rentals I may need), my team (bare minimum $500/day), insurance ($2000 a year but likely would need additional coverage for something like this), my attorney (because someone is going to need to look over the contracts), my editing time, my computer, my gas every day, food, and gosh I’m sure I can think of plenty more expenses that go into what I do.”

Additionally, Saul points out that the last year has been devastating to wedding photographers, as the pandemic caused many of them to either postpone or lose contracts.

“Do you recall we are in a pandemic where the service industry is struggling significantly?” she asks. “You are worth $200 billion and can’t pay a photographer anything for five days, five weddings? That is a lot of exhausting work and hard work for you to get free images for you to use to advertise and promote a TV show that you will make a ton of money from. It’s insulting to artists worldwide.”

While the series is funded by and will be aired on Netflix, it is unlikely that the streaming behemoth is aware of how the producers of the show are soliciting talent. Kinetic Content is likely solely responsible for how it spends the budget granted by Netflix and the choice to seek unpaid labor from photographers is likely entirely on the production company.

“Bottom line, this is offensive,” Saul says. “Pay your contractors. Pay artists. Pay people a fair wage. If you profit on something like all these big corporations are then pay at least something. It’s insulting and degrading.”

Saul confirms to PetaPixel that she was not the only photographer in her network who was contacted by Kinetic Content, and her worry is that someone will actually take them up on the offer, an offer she believes is egregiously predatory.

“The sad reality here is that someone will work for free because it is an opportunity. You may meet some people but just know I know and now the internet does too. It really just makes you wonder how many of their contractors are unpaid that they are profiting off of. Know your worth.”