YouTuber, actor, and content creator Josh Yeo created a device that he says is the world’s first ceiling-mounted, motion-controlled camera dolly that allows him to create incredible motion timelapses and cinematic video shots in a way that dramatically elevates the quality of his work.

What Yeo has designed — called the Orbit — allows for some rather impressive shots, particularly when it comes to video and timelapse. The device is simple in concept: a motor that supports two arms connects to the ceiling via a rod that is held in place by four screws. The whole apparatus hangs above whatever subject is desired and can pan or fully rotate around it.

That’s it: At its core, the Orbit is just a single-axis robot arm with a LED light that is mounted in the center. But what you can do with that single-axis does look like it can open a door to a wealth of possibilities.

Yeo shows the Orbit being used for timelapsing builds, stop motion, slow-motion capture, interviews, and more. While he mentions the only downside of the product is that it must be mounted to a ceiling, Yeo also shows how it is possible to use the Orbit outdoors as well with an optional kit.

Below is a film Yeo produced using the Orbit:

In designs and examples presented on his crowdfunding page, Yeo shows that one of the two arms would hold the camera in place while the other arm can be used for a variety of purposes, from standard lights, to whiteboard bounce cards, to batteries, to a second camera, to simply just a counterweight. Yeo says that he wanted the Orbit’s motor to be capable of both pretty quick speeds as well as very slow speeds to give creators a good range of possible uses.

Additionally, the Orbit needed to be absolutely silent so as to not cause audio issues when recording in quiet studios. His first prototype — which he says he built three years ago — was cobbled together using a repurposed timelapse motor (specifically a Syrp Genie). The version that he has put up on Kickstarter is significantly improved from that original design. 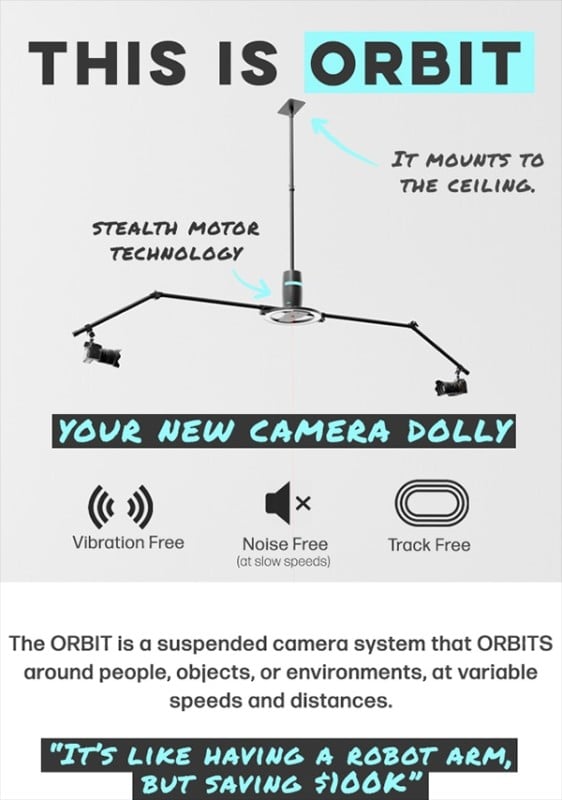 Part of what makes the Orbit so easy to like is due to how charismatic Yeo appears on camera, his clever editing, and the transparency he reveals in the 13.5-minute video pitch. That seems to have paid off, as at the time of publication, the Orbit was fully funded and had raised over $200,000.

As a note, buyers should be aware that this kind of camera movement is really useful, but can become stale very quickly. The orbit will best be utilized sparingly to highlight specific aspects of a project rather than be the focus of the production.

The Orbit can be backed on Kickstarter starting at $599 and has an estimated delivery date of October 2021. You can peruse all the options here.

Canon is Releasing Webcam Kits for its DSLRs and Mirrorless Cameras