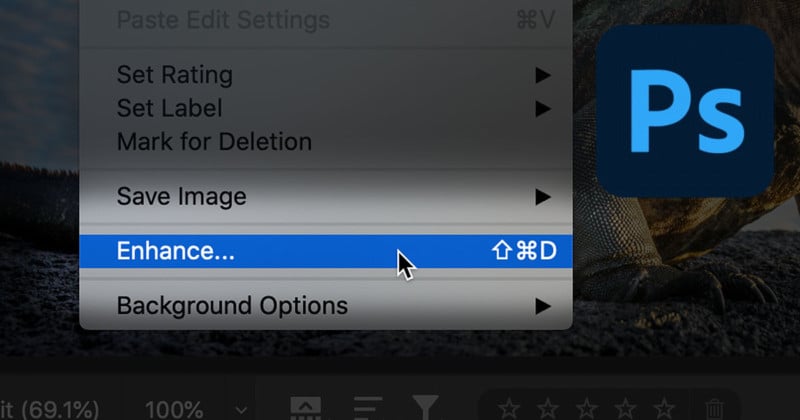 Adobe just dropped its latest software updates via the Creative Cloud and among those updates is a new feature in Adobe Camera Raw (ACR) called “Super Resolution.” You can mark this day down as a major shift in the photo industry.


I have seen a bit of reporting out there on this topic from the likes of PetaPixel and Fstoppers, but other than that the ramifications of this new feature in ACR have not been widely promoted from what I can see. The new Super Resolution feature in ACR essentially upsizes the image by a factor of four using machine learning, i.e. Artificial Intelligence (AI).

The PetaPixel article on this new feature quoted Eric Chan from Adobe:

Super Resolution builds on a technology Adobe launched two years ago called Enhance Details, which uses machine learning to interpolate RAW files with a high degree of fidelity, which resulted in images with crisp details and fewer artifacts. The term ‘Super Resolution’ refers to the process of improving the quality of a photo by boosting its apparent resolution,” Chan explains. “Enlarging a photo often produces blurry details, but Super Resolution has an ace up its sleeve: an advanced machine learning model trained on millions of photos. Backed by this vast training set, Super Resolution can intelligently enlarge photos while maintaining clean edges and preserving important details.

What does this mean practically? Well, I immediately tested this out and was pretty shocked by the results. Though it might be hard to make out in the screenshot below, I took the surfing image shown below, which was captured a decade ago with a Nikon D700 — a 12MP camera — and ran the Super Resolution tool on it and the end result is a 48.2MP image that looks to be every bit as sharp (if not sharper) than the original image file. This means that I can now print that old 12MP image at significantly larger sizes than I ever could before.

What this also means is that anyone with a lower resolution camera, i.e. the current crop of 24MP cameras, can now output huge image files for prints or any other usage that requires a higher resolution image file. In the three or four images I have run through this new feature in Photoshop I have found the results to be astoundingly good.

Let’s run through how this works. First off, it works with any image file, whether it is a raw images file, a TIFF, or a JPEG. You will have to open the image file in Adobe Camera Raw via Photoshop or Adobe Bridge as shown below. To access the Super Resolution feature, right-click on the image and choose “Enhance” as shown below.

A dialog window will come up so you can see how the image will look and you can also toggle back and forth between the original image and the new Enhanced version. The dialog will give you an estimate on how long it will take to create the new Enhanced image, which will show up as a separate image file. Once you are ready simply click the Enhance button in the lower right-hand corner. ACR starts working in the background immediately to build the new image file and it eventually appears right next to the original file you selected wherever that one is stored. 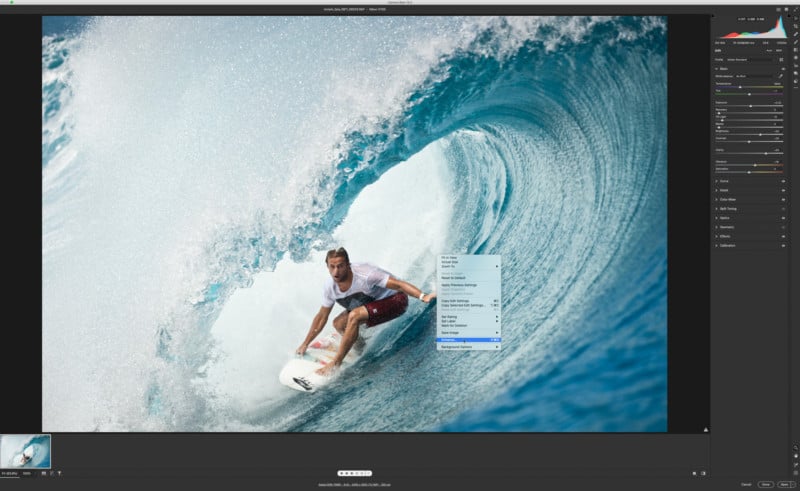 In my testing, as shown below, it took this old 12MP image from 4256×2832 pixels to 8512×5664 pixels. The screenshots below show this enlargement. The top image is the lower resolution (original) version and the bottom image is the one that went through the Super Resolution process. The higher-res image looks absolutely amazing. And at 48MP I could easily blow this up to a 40×60 inch print just as with any image captured using my 45MP Nikon D850.

Once I upsized the image using the Super Resolution feature, I zoomed into the resulting image and was very impressed. The image seemed just as sharp (if not a little sharper) as the original image file but of course it is massively larger (in terms of resolution and file size). Kudos to the folks at Adobe for creating a truly revolutionary addition to Photoshop. I have tried some of the Topaz AI software options, like Topaz Gigapixel AI, but I have not seen it work this well.

So what does this mean? For starters, it means that AI technology will have a huge impact on photography. Going forward, the software we use to work up our images (and upres them) might in some instances have a larger effect on the final images than the camera that was used to capture the image.

To a certain degree, this new tool in Photoshop significantly equalizes the playing field no matter what camera you are working with. All of a sudden my Nikon Z6 and Fujifilm X-Pro3 (respectively 24MP and 26MP cameras) are capable of producing stunning large prints in a way that was previously just not possible.

What about high-resolution cameras you may ask? Where do they end up with all of this? The new Super Resolution tool will allow up to upres any image as long as the resulting “Enhanced” image file is less than 65,000 pixels on the long side and under 500MP in total. What that means is I can upres the 102MP images from my Fujifilm GFX 100 and GFX 100S cameras and produce insane 400MP image files from a single image. That is getting into the absurd, but that also opens some doors for crazy huge prints.

The reality is that this feature is a huge boon to lower resolution (12MP to 16MP) and even medium resolution (24MP) camera owners. Higher resolution cameras will still yield better image quality but we now have the option of making large prints from relatively low-resolution image files.

Enhancing a Photo to 376 Megapixels

After talking with some photographer friends about this new feature I played around with images from a variety of different cameras to see how it varies. I ran a few images through from my Nikon Z6 and also a few from my Fujifilm GFX 100. With the GFX 100 image, the Super Resolution feature popped out a 376MP image file that was damn near identical to the original image file, just four times larger. My jaw hit the floor when I zoomed into 100% and compared it to the original! You can see both the original and the Enhanced images below. There is no way to actually convey the 100% image size here as I have no control over the viewer’s screen resolution but regardless, they both look wicked sharp.

From what I can tell, the Super Resolution tool seems to do an even better job with higher resolution cameras and in particular with cameras that do not have an anti-aliasing filter in front of the sensor. My Nikon Z6 images when enhanced with this tool still look impressive but not as jaw-dropping as the example above. The Z6 has a very strong anti-aliasing filter, basically a filter that slightly blurs the image to reduce digital artifacts. In addition, it seems like the amount of sharpening or noise reduction applied to the image is also magnified so playing around with how the image is worked up may have a significant effect on the final image quality. I will have to do some more testing.

If you have gotten this far, and are still reading this full-on pixel-peeping madness, then you might have realized that this could be the best upgrade to any and every camera ever. This is certainly one of the most incredible features Adobe has ever released in Photoshop.

This is just the start of the AI revolution. It also shows quite clearly that many of the advancements in image quality are going to come from the software side of the equation as we start to see cameras with incredible specs that might be hard to dramatically improve upon in the coming years. I am super excited about this new option in Photoshop as it will allow me to offer much larger prints than I have been able to create previously–and they will look stunning.

About the author: Michael Clark is an internationally published outdoor photographer specializing in adventure sports, travel, and landscape photography. The opinions expressed in this article are solely those of the author. Clark contributes to National Geographic, National Geographic Adventure, Sports Illustrated, Outside, Men’s Journal, Backpacker, Outdoor Photographer, Digital Photo Pro, Climbing, Alpinist, Rock and Ice, Bike Magazine and The New York Times among many others. You can find more of Clark’s work on his website, Facebook, Twitter, and Instagram. This article was also published here.

Reviews, Software
adobe, adobecameraraw, adobephotoshop, enhance, feature, photoshop, review, superresolution, testing, upscale
Related Articles
Discussion
Trending Articles
Milky Way Explodes Into View During Lunar Eclipse
May 18, 2022
The Science Behind Why Watches are Set to 10:10 in Advertising Photos
May 17, 2022
Navy Fighter Jet Seen with ‘Shockwave Lines’ as It Nears Speed of Sound
May 16, 2022
Crocodile Dad Gives Over 100 Babies a Ride on His Back
May 15, 2022
Eerie Photos Reveal Last Moments Before Women Vanished in Panama
May 19, 2022