I just purchased Adobe Photoshop CS4 last week for my Macbook after being unable to transfer my CS3 student serial for PCs to a Mac version. Adobe’s phone customer support leaves something to be desired. Spent an hour’s worth of cell phone minutes listening to their elevator music, and finally hung up without talking to anyone. It’s pretty absurd that they put you on hold for so long even when you’re calling to make a purchase. They could learn a thing or two from Zappos.

While I was in the student store, I was thinking about also purchasing Lightroom 2. A lot of my buddies use it for their photography, but I always used Photoshop since I needed Photoshop for web development and thought Lightroom’s functionality with be redundant. However, Lightroom definitely had some features that I wish CS3 had, but was pleasantly surprised to find included in CS4.

One such feature is the new adjustment brush in Adobe Camera Raw: 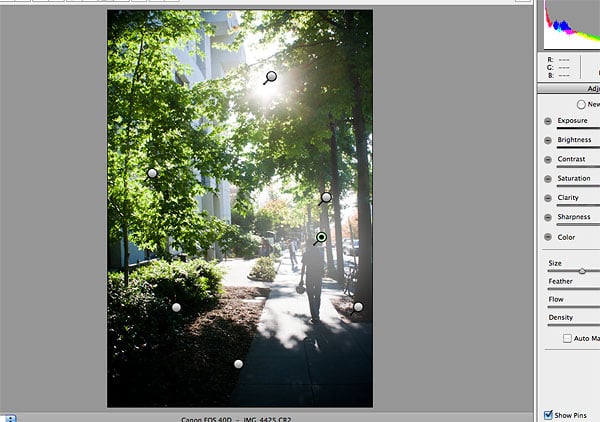 Those of you who got CS4 a while ago have probably been using the adjustment brush for a long time already, but for those of you with a previous version of Photoshop and who shoot Raw, this is a pretty darn good reason to upgrade.

Now, if only Adobe would include better methods for comparing the before and after images in ACR…

Digital Photographs for a Lifetime