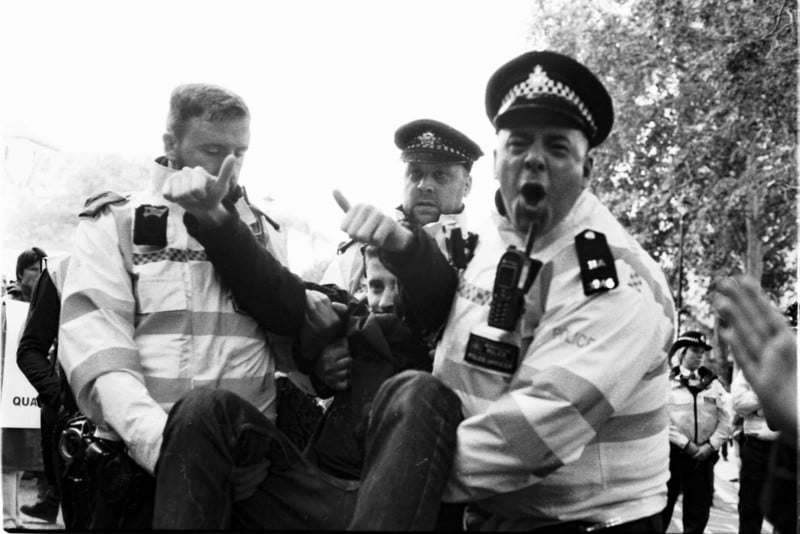 “MOVE OUT OF THE F**KING WAY!” is exactly what I remember the officer shouting at me as I made this photograph. The expression on his ruddy face, the jovial protestor with his thumbs up, all barrelling towards me as I burned the exposure onto the 13th frame of a roll of HP5+.

I didn’t think much of it on that day in October 2019 and simply continued to document the protest that was going on around me. I removed myself from the path of the oncoming arrest-train, only to be shoulder clipped by another officer who went out of his way to make the contact, clearly disliking the presence of photographers in this public space.

At the end of the week, I developed my rolls and saw this image first through the negative that I held for review to my bathroom light. The juxtaposition was clear — the triumph of the shackled martyr, his role in stretching the resources of the Met thinner in the form of offering up his body for arrest, and the moment of pure anguish from that police officer. Seriousness and trivialities, hardness, and softness. A thematically well-balanced and neatly-executed photograph. However, it was after showing this photograph to a colleague that something else clicked — I had been so wrapped up in that moment, manually focusing, manually exposing, keeping track of my environment, and keeping that momentum to keep making images. The challenges I was facing were the practicalities of shutter speed, aperture, balancing fast motion with what elements I wanted to freeze, how much depth of field I wanted to include, the context of the situation, all while walking backward myself to keep all of this in my frame, avoiding tripping hazards, other protestors, other police.

So when I showed my colleague and their response was to ask if I was doing OK, I realized that I hadn’t even considered that a situation like this could even have an effect let alone a negative one, not to do with photography but just a life thing. Throughout making this image my camera was glued to my eye. The officer was shouting directly at me. Not at some floating, abstract, disembodied lens-observer, but at me, Andrew. This photograph is more than just a moment in a protest, it places the audience directly into my eyes to see something that happened to me, from my own perspective. When I see this photograph, I have both the frame on paper and the memory of that moment shaped in turn by the photograph of it. I am transported into that moment of very brief conflict, with no resolution other than the click of the shutter. I have incredible respect for photographers who put themselves into deadly situations to make work — being shouted at is absolutely nothing in comparison to true horrors. However, it still has an effect — it exists as a part of who I am, the way I perceive my fellow countrymen, the way I view conflict on the streets. It’s not a memory to escape or repress — the photograph would haunt that; the moment exists because of the compulsion to make such an image.

Whenever I find myself documenting conflict, whether large scale or more intimate, I am comfortable sharing those experiences with others in my documentary collective, New Exit Group. We’ve all got an understanding of what that kind of work involves, and have good ways of supporting each other — essential. While in the field, we are also comfortable engaging with other photographers who seem like they need a bit of support at times, which is always a positive experience.

The photography aspect is my entire reason for putting myself in these spaces, but with a group, we can also prioritize looking out for one another. In response to whether or not this image affected me, I don’t think it has yet. Maybe it’ll compound over time, and maybe it’ll dissipate into nothingness. 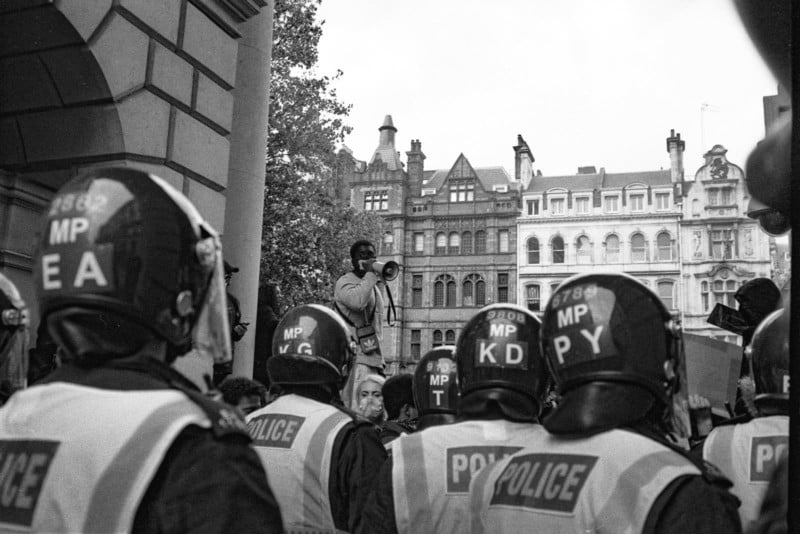 In June 2020, I documented a pretty heavy clash between different protest groups and the police. Fireworks, flares, and bottles were thrown at me, legitimate explosions happening only a few feet away from my lens at times. Yet somehow this was a less personal feeling — I was in the crowd and was not being targeted directly. Despite being in actual danger, it was lacking an emotional connection and again I haven’t felt a negative consequence from it yet.

Images of arrests are very common, and it’s difficult to produce something unique, so even though I see many handcuffs being applied I rarely reach for my camera to document these. There’s something about the pace, emotion, balance in the image I made while being screamed at that will be tough to beat. But the situation of chaos around me, the action, is addictive as a documentary photographer. I want to capture the variations and nuances in the behavior during violent outbursts, there is always something new that catches my eye. That early experience gave me a lot to be mindful of moving forward with this kind of photography. There is often more time than you’d realize to really take a step back and decide what detail you want to concentrate on — giving yourself this physical and mental space means you’ll produce something thoughtful and not just a snapshot of a person in handcuffs. But giving space to those involved in the moment is essential as well — giving the police space to work means not only avoiding ending up in cuffs yourself, but it also negates a situation where any aggression is directed towards you.

Thanks for taking the time to read about the way I worked this situation! You can follow my work on Instagram and also check out the debut zine I contributed to along with the other members of New Exit Group.

About the author: Andrew Blowers is a 35mm film photographer, and bassist. The opinions expressed in this article are solely those of the author. You can see more of his work on his Instagram and Twitter.