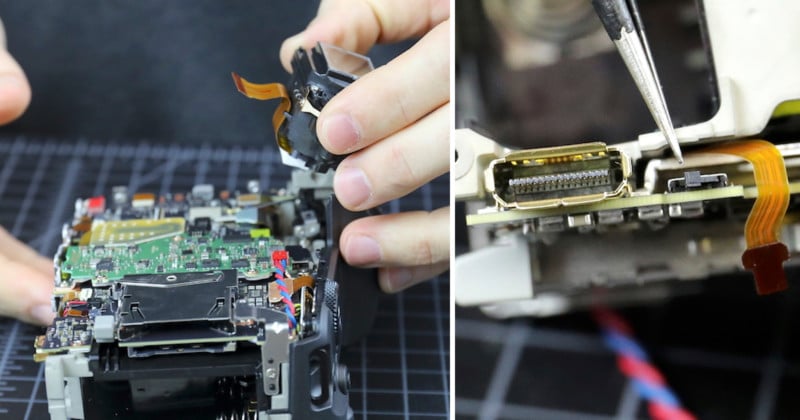 Roger Cicala and the crew at Lensrentals finally got the chance to do a proper teardown of the Canon EOS R5, and what they found is an exceptionally well-sealed camera that’s packed full of the latest tech. That’s both a huge pro and, if you’re thinking in terms of heat dissipation, a potential con.

It’s worth mentioning right away that Cicala doesn’t tackle the overheating debate directly… at least not yet. But he does point out all of the design elements that produce heat, the ones that are there to take away heat, and why this particular camera might not be very good at actually dissipating heat once it builds up.

You can see the full teardown at this link, but there are a few points worth calling out.

First and foremost is the weather sealing, which is some of the best (if not THE best) that Roger and his team have ever seen, at least on the bottom 2/3 of the camera. It seems that, assuming there are no leaks, you could set this thing down in a puddle no problem because there are some beefy gaskets to keep the internals cozy. Which brings us to the second major point: unlike the “roomy” EOS R, this camera is packed to the gills, leaving very little room for airflow.

There are multiple heat sinks, thermal pads on the top and bottom of the main board, and the new IBIS unit, which looks to be very sturdy and packs right up next to the shutter assembly (obviously).

One specific call-out is that the CPU does have its own thermal pad and heat sink, contrary to what an earlier teardown seemed to suggest. The two thermal pads on the SDRAM send heat to one heat sink and leave the top of the CPU uncovered, but there’s ANOTHER thermal pad on the bottom of the board, right below the CPU, that transfers heat to another, beefier heat sink.

Finally, since most of the hacks for bypassing the “overheating timer” that’s been programmed into software involve tricking the camera into thinking the battery door is closed, Roger took a closer look at that battery door switch. In his words:

As long as we’re looking around the edges, I should show you the battery door switch, since people have been having a grand old time stuffing things in there to make the camera think its door is staying shut. This is a small, frail switch soldered directly to the motherboard and only held on by the solder. I have it on very good authority (my own) that it’s easy to dislodge the switch from the circuit board with just a little bit of torque, requiring a complete mainboard replacement, which is very pricey.

You have been warned.

There’s obviously a lot more to see here, so if you want to dive deeper check out the full teardown over on the Lensrentals blog.

The overall conclusion seems to be pretty straight forward: this is a really well-built and well-sealed camera body, which is a strength… but may also be one of its weaknesses. As good as it is about keeping water out, it will be almost as good at keeping hot air in.

As such, it’ll take some proper thermal testing to figure out if those overheating “hacks” that let you bypass the timer are going to cook your R5, or if they’re totally safe. As Roger puts it in his conclusion: “Somebody should look into that.”

Image credits: Photos by Roger Cicala/Lensrentals and used with permission.