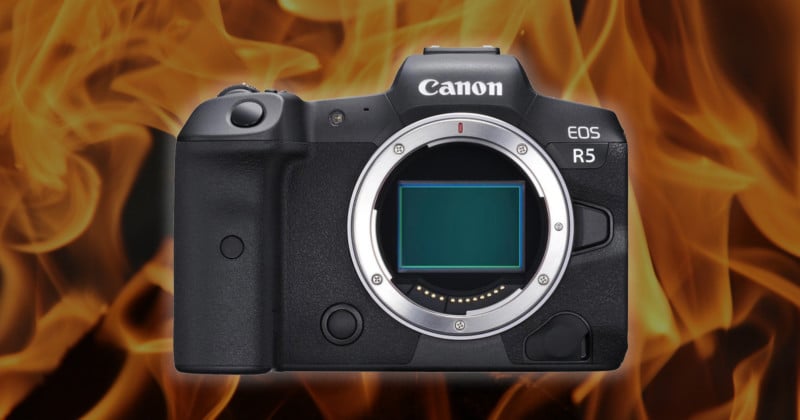 After a DPReview forum user suggested that the controversial overheating and recovery time limits on the new Canon EOS R5 may not be based on temperature at all, several people have tried various “hacks” that seem to prove him right. Based on these tests there is an artificial timer built into the camera’s firmware, which can be reset.

This story begins last week, when a user on Chinese social media site Baidu broke open their EOS R5 and found that removing an internal button battery “reset” the overheating timer, allowing them to go right back to shooting without any recovery time. A PetaPixel reader sent us that link and this Imgur translation on Thursday morning, but as we had no way to verify this information, we held off.

However, it was picked up and shared more widely by Andrew Reid at EOSHD, which may very well have led to the revelation that came next.

In a post on the DPReview forums, a user who goes by Horshack proposed an easier way to bypass this function. He suggested that you could “reset” these timers by activating the Canon’s battery door sensor and then pulling the battery while the camera is still recording. This would prevent the R5 from writing the thermal information to non-volatile memory (NVRAM), and if you don’t corrupt your footage in the process, you can shoot as much 8K or 4KHQ as your heart desires without running into the overheating limits.

Long story short… Horshack was exactly right, as you can see from the various videos testing his theory below.

Several people, starting with YouTuber J. Marcus Photography, then Reid at EOSHD, and then some of the bigger YouTubers like Matt Granger, have all run some version of this test and produced the same results: if you can prevent the camera from writing the thermal info to the NVRAM, it resets like nothing happened.

If the overheating limit was actually based on a temperature sensor and the heat inside the camera, then this “hack” wouldn’t work; the camera would just re-read the thermal info as soon as you turned it back on, and find that it’s still overheating. The fact that these tests reset the timer without issue seems to prove that Canon baked a timer directly into the firmware instead.

Of course, we would NOT recommend using this as a proper workaround. Removing the battery over and over while actively recording is a great way to corrupt footage or do serious harm to your camera. But it does show that Canon could “fix” or at least seriously improve the EOS R5’s record time via firmware.

And that’s what’s exciting here. Not that Canon has been “caught out” or that the overheating limit is a “hoax.” The company may have a good reason for implementing an artificial timer rather than using the temperature sensor, and assuming that it was done maliciously in order to push users towards Cinema EOS is just that: an assumption.

What’s exciting is that Canon might be one simple firmware update away from turning the EOS R5 from a great stills camera, into a hybrid powerhouse. We’re keeping our fingers and toes crossed…