I’ve been at this game a long time, and as my career has evolved, I’ve ended up in a lot of unexpected places. I went from shooting BMX and skateboarders, to commercial work in the make-up industry, to running workshops and gear demos.

Eventually, that evolved into online teaching, but it wasn’t until recently that I found a platform that felt “right” for photographers. For me, that platform is Twitch.

When I first started presenting in front of a camera, I was doing Instagram Live demos every week for Adorama. Back then, there was no IGTV for these demos to live on, so they went away after 24 hours—nothing to build on unless people tuned in every week.

Feeling as though the platform of Instagram wasn’t fleshed out for the live streams at the time, I moved my demos over to the Adorama’s Facebook page. I would perform/teach at the event space for in-room crowds, but that meant splitting my attention between the demo, the crowd, and the online audience. This worked out well for a while, and it validated my ability to work on-the-fly and answer questions as they came up in the chat, but Facebook didn’t feel like it had the momentum or an audience that you could actually reach without paying.

This led me to YouTube, where I turned my personal channel all-live… problem is, while YouTube reached a wider and more engaged audience, it was failing to build any community. Sure, I would see some of the same faces pop up in the chat over and over again, but there was a disconnect. There’s this entitled vibe I’d get from the platform, as the toxic comments you see on YouTube all the time were now appearing in real time.

Imagine dealing with that while trying to shoot a live video, explain what you’re doing, and keep a coherent flow going.

While I built a solid base of supporters the chat itself didn’t feel beneficial for those following what I was doing, and the monetization options for the channel felt weak as well. I wanted to make a commitment to the platform, but there needed to be a soul there and I just didn’t feel it. 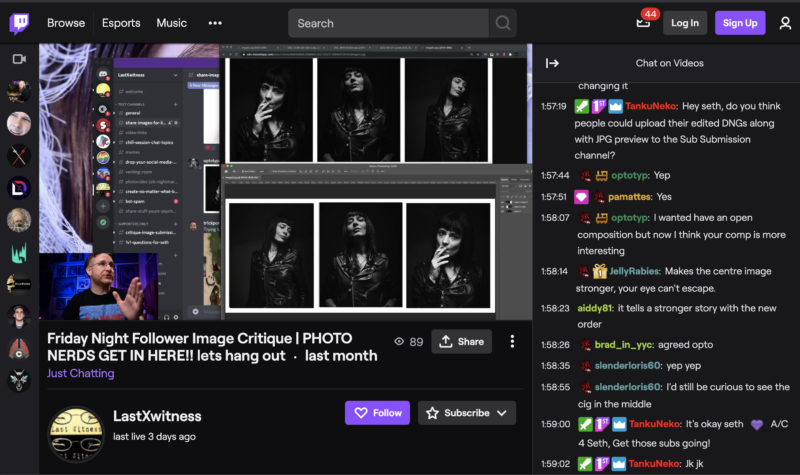 Twitch was something I scoped out for a long time—being a life-long fan of video games myself—but it didn’t initially seem like I would have any interest in building on it personally. Then I dived in head-first to launch a Twitch channel for Adorama (for their gaming community) and something happened: the chat was just awesome!

It felt like a house party. Almost like a meeting place… a destination where you would just see your “crew.” The pace felt chill; you were expected to lay back a little and just be there, not be “UP” there like you are on YouTube, if that makes sense. Soon, I noticed an overlap with photographers who just happened to game, and I started to wonder if there was something there.

One day while surfing Twitch, I hit on the categories that lead me to a cooking show, podcasts, people singing, playing instruments, painting, drawing, it just kept going. I figured: if you could do those things, then I can shoot a live demo like I do on any other platform. I went for it to a dead chat room.

The interface was there though, and furthermore, almost every channel on this platform had a Discord server running in parallel.

Discord is basically a 24/7 forum that you control, with chat rooms that are organized however you’d like. This allows your community to stay active and engaged with each other when you’re not live on the channel, so there’s always a sense of momentum. They can share images, links, ask questions to the group—it’s like boiling down your followers to the truly clicked in and engaged ones. 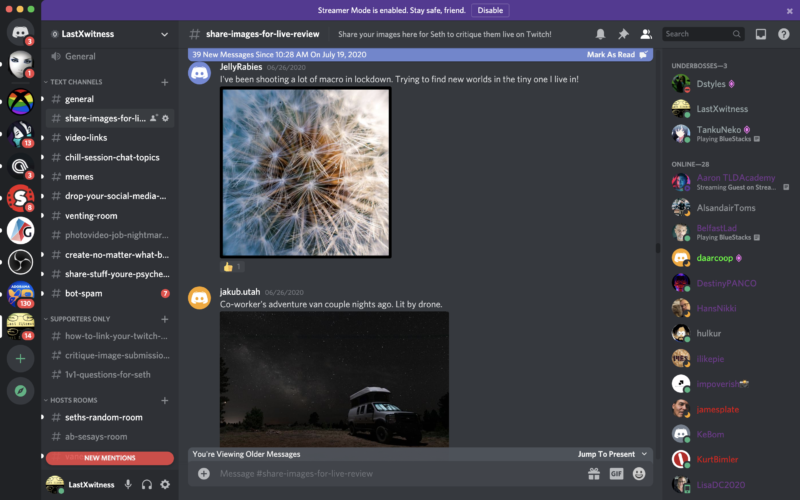 Any time I’m about to go live on some other platform or release new content, I let my Discord server know and it acts like a direct line to the core of the audience that I’ve built. And since it’s a dialog, I learn from them as well: about experiences that I don’t have, equipment that I don’t own, and parts of the world I haven’t been to.

Getting Started on Twitch

When I started out, that Discord server was as empty as my chat rooms, and I needed to figure out what a Twitch “setup” should look like and how the algorithms worked.

For the setup, you need something that looks and sounds clean. Photographers have an advantage here, because while most streamers want to create a solid look, many would just copy other people’s streams. My first decision was to go with a system that none of them were using, but that I’d had for decades… Nikon. That alone became a talking point when I popped into other streams to ask what they use, and I noticed some of them came to my chat when I was live just to see how it looked.

On top of this, Twitch is somewhat gamified—you need to hit benchmarks (similar to YouTube) to unlock features. One of these marks was 500 minutes of stream time, and so that’s exactly what I went for. Every night for weeks I went live for at least an hour and just talked about issues in the industry, new gear, legendary photographers I thought people should be aware of, and shared old work.

I’d invite my colleagues on as guests, like Daniel Norton, Vanessa Joy, even Joe McNally—they could just hang out and be themselves just that little bit more, rather than being on camera for a brand. As a host, it’s almost therapeutic; as a viewer, you get a glimpse at the human behind camera.

I just kept going with it, and kept my viewers guessing what would happen next time I’m live. 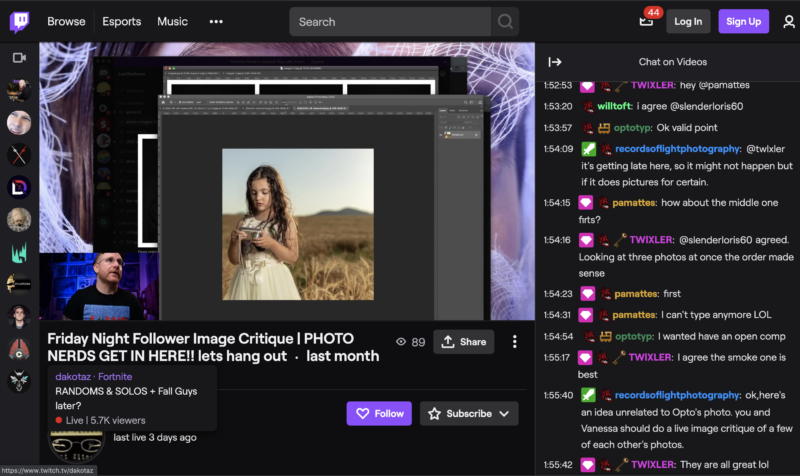 Pretty soon the chat was alive, and I’d see the same names and continue conversations where we left off, something I’ve not experienced on the other platforms I’ve been trying to grow on. Once I’m live, I can see what’s resonating in real time through the Discord, and throughout the week I get to see the conversations evolve so I can better understand the audience’s point of view.

The best part is they are all very welcoming of new people and I’m yet to see the kind of malicious comments you get on YouTube all the time. No elitists, egos, bitter veterans, scared rookies, or anything else that just didn’t gel on the other platforms.

Staying motivated as a creative is incredibly difficult when you feel like there’s no purpose to your work. That it goes nowhere, and despite all your friends “smashing” that Like button your community doesn’t seem to grow. These two forums (Twitch and Discord) seem to have given my audience a tiny little thing to strive for. Sharing that next shot with the group, hearing the feedback, or even shaking off what’s eating at them after they vent it out.

It’s that photo class you had back in the day; it’s that photo group you joined in your town; it’s the place you go to hang out and be a nerd. The only difference is that it’s lead by you…

Twitch is essentially a screen sharing social platform, which makes it ideal not just for educational content, but for really engaging work like image critiques for followers. This isn’t vapid, empty, snackable, quick-in and quick-out content like TikTok; it’s a platform where people really “move in” with you and sit down to engage for the long haul.

The main issue with Twitch is discoverability. People can choose to “clip” live segments, which helps, and it’s smart to steer people from your other platforms if you want to see any growth at all. Sharing clips to Twitter, Instagram, Facebook and YouTube can help raise awareness for your channel; I even upload past streams to YouTube after a little editing if there was a really good conversation or an interesting camera comparison.

In terms of monetization, the platform is pretty well outfitted. You can structure benefits in “tiers,” like certain streams being only for subscribers, and there’s a donation mechanic as well. If you keep at it, you’ll see a Net 15 payout schedule, which includes ad rolls as well.

Of course, no matter what you do, it’ll take time. I’m just here to tell you that (at least so far) it’s totally worth it because I haven’t found this sense of community anywhere else. Is my Twitch channel huge? NOPE. But that small number is made up of the right people, and as the platform continues to grow beyond gamers, I trust same will happen to my little corner of it.

About the author: Seth Miranda is a New York City-based photographer, educator, and host for Adorama TV. You can find more of his work on his website, or by following him on Instagram, YouTube, Twitter and, of course, Twitch.