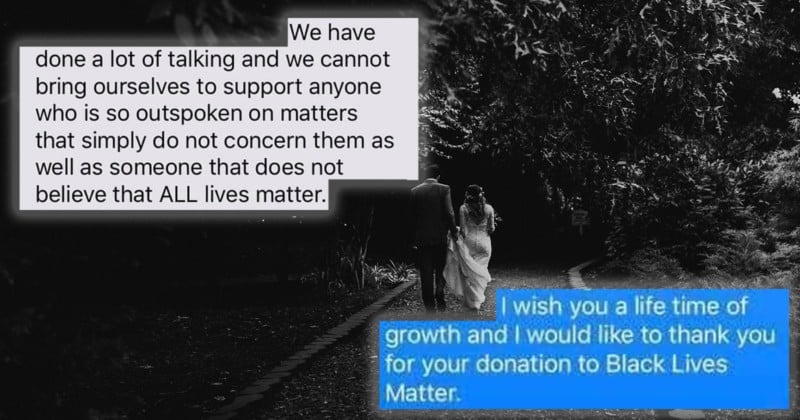 An Ohio wedding photographer found herself in an awkward situation earlier this month when a couple she had been hired to work with demanded to be “relieved” from their contract, accusing her of being “unstable” for posting something in support of the Black Lives Matter movement.

According to Insider, Cincinnati wedding photographer Shakira Rochelle was all set to photograph the unnamed couple’s wedding when she received an upsetting text from the bride asking that Rochelle refund their non-refundable deposit and let them off the hook for the contract they had signed.

The message was prompted by the Instagram post below, in which Rochelle affirmed her support of the BLM movement, writing that, “Shakira Rochelle Photography stands in solidarity with the black community. The black lives matter movement has my endless support ✊🏼”

A post shared by Shakira Rochelle🌿 (@shakirarochellephotographyy) on Jun 5, 2020 at 5:34pm PDT

This, apparently, did not sit well with the bride, who texted her a few days later. You can read the full message below, but the bride pulled no punches, writing that the couple “cannot bring ourselves to support anyone who is so outspoken on matters that simply do not concern them,” and that they would “be truly embarrassed to have you at our event.”

“Please let me know when and how we can expect our refund,” reads the end of the text. “We are requesting to be relieved from our contract.”

In response, Rochelle reminded the bride that the deposit was, in fact, non-refundable. She then wished her “a lifetime of growth” and implied that the deposit would be donated to a BLM charity. “Thank you for your donation to Black Lives Matter,” reads the end of the text.

The response, a single line, simply reads “you will be hearing from our attorney.”

The interaction between Rochelle and the bride went viral after a friend of the photographers’ asked that she post the screenshot of the text conversation, but it’s not been an entirely positive experience for Rochelle. She’s been attacked on both sides: with those who oppose BLM offended by her stance, and others who support it accusing her of trying to profit off of the movement.

In response, she posted the following statement to all of her social media accounts, calling the accusations “absurd” and refusing to take down the original post as it “would go against I stand for.” You can read the full statement below:

“I was hoping to lay low until this frenzy blew over but today I woke up to something that hurt my soul,” writes Rochelle. “There is a photoshopped screenshot circulating stating that coming forward with this story was a business tactic to make a profit on the blm movement.”

“This is the most incredibly absurd thing I have ever heard. The original post started out private until a friend asked if she could share it. I never had the intentions or the desire to go viral for this or anything else.”

Testing the Impact of Scratches, Dust and Fingerprints on Image Quality