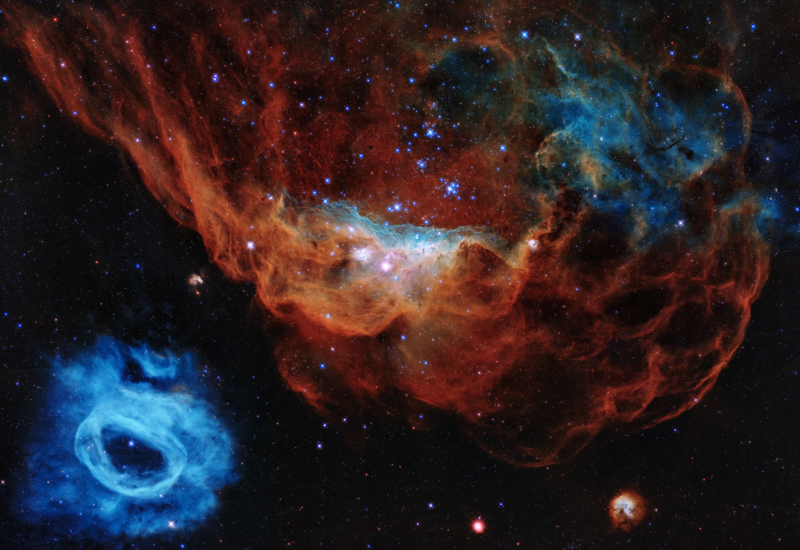 Hubble turned 30 years old this month. Well, actually, the space telescope celebrated 30 years in orbit, but either way, NASA took the opportunity to celebrate this milestone by capturing a spectacular, never-before-scene view that they’re calling a “tapestry of blazing starbirth.”

“On April 24, 2020, the Hubble Space Telescope celebrate[d] its 30th year in orbit by premiering a never-before-seen view of two beautiful nebulas named NGC 2020 and NGC 2014,” writes NASA. “In this Hubble portrait, the giant red nebula (NGC 2014) and its smaller blue neighbor (NGC 2020) are part of a vast star-forming region in the Large Magellanic Cloud, a satellite galaxy of the Milky Way, located 163,000 light-years away.”

NASA has nicknamed the image Cosmic Reef, because it “resembles an undersea world.”

In the video below, Hubble’s senior project scientist Dr. Jennifer Wiseman takes you on a tour of this new image before taking a second to describe the telescope’s current status and share some of Hubble’s most significant contributions to astronomy. If you’re a fan of astrophotography or astronomy in general, you’ll want to check this out:

To date, Hubble has made over 1.4 million observations and data provided by the telescope has been used in over 17,000 peer-reviewed scientific publications, but Hubble’s greatest achievement might have more to do with how it’s helped to captivate the public interest.

“Unlike any space telescope before it, Hubble made astronomy relevant, engaging and accessible for people of all ages,” writes NASA. “The space telescope’s iconic imagery has redefined our view of the universe and our place in time and space.”

To find out more about this beautiful 30th anniversary image, or dive deeper into Hubble’s history as one of the most important telescopes ever created, watch the video above and then visit the NASA website. And keep in mind that this isn’t the only cool thing NASA has released in honor of Hubble’s 30th birthday.

Happy (belated) birthday Hubble! Here’s to 30 more years of incredible imagery… and 30 more after that.