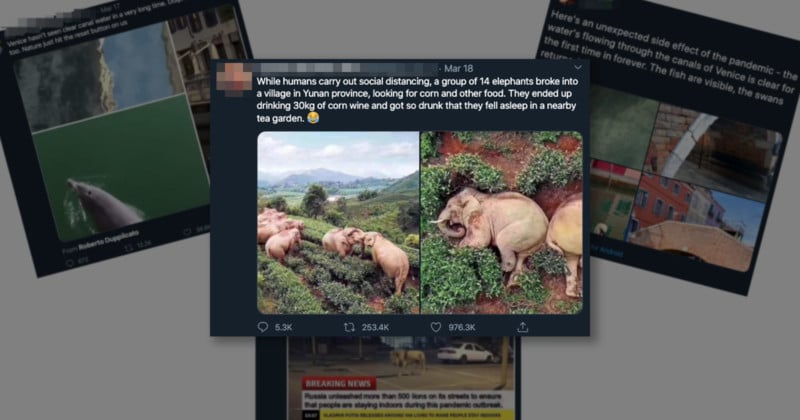 Over the past few weeks, as people the world over were asked (or ordered) to stay home and isolate, you probably saw more than a few viral photos of animals reclaiming habitats that humans are being forced to leave alone. Sadly, almost all of those photos and videos are fake.

In a report by National Geographic, writer and editor Natasha Daly set the record straight on at least three hoaxes, with some help from a few mythbusting Twitter account accounts and official sources.

The elephants that got drunk on corn wine and fell asleep in a tea garden?

While humans carry out social distancing, a group of 14 elephants broke into a village in Yunan province, looking for corn and other food. They ended up drinking 30kg of corn wine and got so drunk that they fell asleep in a nearby tea garden. 😂 pic.twitter.com/ykTCCLLCJu

Fake, according to the local forestry and grassland bureau in Yunan province.

The dolphins swimming through the Venice canals?

Also fake. The video in the tweet above was filmed in a port in Sardinia, where you have always been able to find dolphins.

And the swans and fishes that have suddenly “returned” to the canals in Venice now that the water has cleared up (which it has)?

Here's an unexpected side effect of the pandemic – the water's flowing through the canals of Venice is clear for the first time in forever. The fish are visible, the swans returned. pic.twitter.com/2egMGhJs7f

Daly reports that swans are frequent visitors to the canals of Burano, a small island in Venice, and the fish are also always there. Nothing to see here, except over 1 million likes and over 282K retweets.

Finally, a story that popped up after Nat Geo published their fact check: this fake headline about Russia releasing 500 lions to keep people indoors.

Is this a wind up pic.twitter.com/sG4vnfnxAN

This is definitely fake, as is any “news story” you see that uses this breaking news overlay without any sort of network branding. As the popular Twitter account @PicPedant points out, this is a “Break Your Own News” template.

“Break Your Own News” joke screens use a fairly recognizable template; just watch out for the gradiated red header and yellow kicker box, with no media branding. https://t.co/7djKfWe43B

Of course, not all animal stories are fake, but the most “hopeful” or funny or outrageous—the ones that make you want to hit share—all seem to be made up or at the very least misleading. The impacts of human social distancing and the massive drop in tourism on the animal kingdom has mostly been neutral, sometimes bad.

As reported by the New York Times, the deer in Nara, Japan are indeed leaving their home in the park and roaming mostly-empty streets and subways, because the tourists who used to feed them in Nara park are no longer there.

Less tourists in Nara = less people feeding the deer in the parks 🌷🌱 Now they're venturing out into the city eating flowers and plants, per Fuji TV #coronavirus#新型コロナウイルス の影響で海外観光客の減少が続く奈良公園で、鹿せんべいをもらえなくなってしまったシカちゃん達 😢 pic.twitter.com/yUFWJ4S9sj

And this video of a hoard of monkeys in Thailand fighting over food also seems to be legitimate:

As tourism to the country’s Phra Prang Sam Yot monkey temple in Lopburi drops, the macaques have been brawling in larger numbers and more violently than normal, because food is more scarce.

The lesson here is one that most photographers learned long ago: you can’t always trust photography on social media. Normally, we report on viral Photoshop creations, or fake “debunking” photos that try to make photojournalists look bad, or fake (and stolen) photos used to send a political message.

Unfortunately, the (dubiously attributed) Mark Twain quote that “a lie can travel halfway around the world before the truth can get its boots on,” is just as true of fake photos, and fake photo captions. So while we would love for the dolphins or the drunk elephants to be true, it’s important to separate fact from fiction, lest the public lose faith in all photography, all the time.