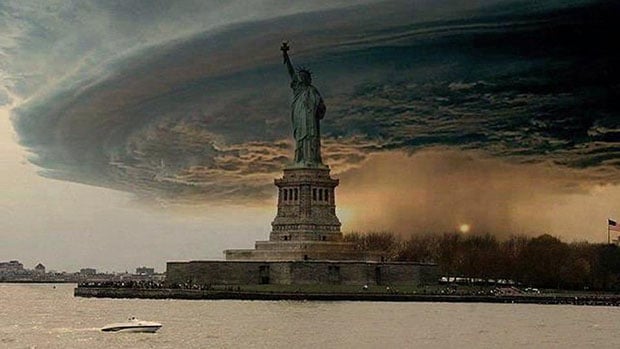 When Hurricane Sandy struck the East Coast back in October, the photograph above was widely circulated by people who believed that it showed the storm bearing down NYC. It doesn’t. The image is actually a composite photograph that combines an ordinary photo of the Statue of Liberty with a well-known image by weather photographer Mike Hollingshead.

You may be thinking, “So what? It’s just a harmless prank that’ll give people a laugh, right?”

Well, yes and no. It turns out that fake Photoshopped photographs may be messing with your brain a lot more than you’d like to think.

Rose Eveleth over at the BBC has published a fascinating piece on how fake photos can affect both our memories and our behavior. She writes,

For decades, researchers have been exploring just how unreliable our own memories are. Not only is memory fickle when we access it, but it’s also quite easily subverted and rewritten. Combine this susceptibility with modern image-editing software at our fingertips like Photoshop, and it’s a recipe for disaster. In a world where we can witness news and world events as they unfold, fake images surround us, and our minds accept these pictures as real, and remember them later. These fake memories don’t just distort how we see our past, they affect our current and future behaviour too – from what we eat, to how we protest and vote. The problem is there’s virtually nothing we can do to stop it.

What’s crazy is how easy it is to manipulate people’s memories. When participants in one study were shown fake childhood photos of themselves riding in hot-air balloons with their families (when they hadn’t actually), 50% of them began “remembering” going on the ride that never happened.

Unfortunately for us humans, it’s apparently impossible to guard our brains from this trickery. Eveleth continues,

In the end, there’s not much anyone can really do to guard against being duped by these images, says [scientist Kimberly] Wade. Her lab has done studies in which subjects are told that they’re about to see both fake and real images. Even with the warning, people will still remember the fake photographs as real. “Warnings don’t seem to have much of an effect,” she says, “that’s how powerful some of these fake photo manipulations can be.”

While phony weather photos and fabricated leisure memories may not be a very big deal, this issue becomes much more significant when you consider other areas that it affects: politics and policies, for example.

How fake images change our memory and behaviour [BBC via DPReview]