If you have deep pockets and want to venture to the edge of what’s possible in ultra-wide lenses, check out the new C-4 Precision Optics 4.9mm f/3.5 Hyper Fisheye. It’s the world’s widest-ever fisheye lens, so wide that it can see behind itself, and it can now be yours for the low price of $39,000.

The lens was first unveiled back in February 2019 by LensRentals founder Roger Cicala, who created C-4 Precision Optics as an April Fool’s joke back in 2015 before turning it into a real brand. Build-wise, the lens “looks like a spaceship beaming up your camera.” The 28.6-pound (13kg) lens comes with its own extendable tripod legs and a cheese plate, and the camera is mounted in the interior space. To shoot horizontally, you’ll need to mount the cheese plate (rather than the camera or lens) to a support system.

“This lens will not work well in situations that don’t allow for heavy-duty tripod mounting on account of the large amount of glass required to make this wide-angle feat possible,” LensRentals writes. “This is a mount the camera on the lens kinda situation.” Here’s a sample circular fisheye photo captured with the lens: 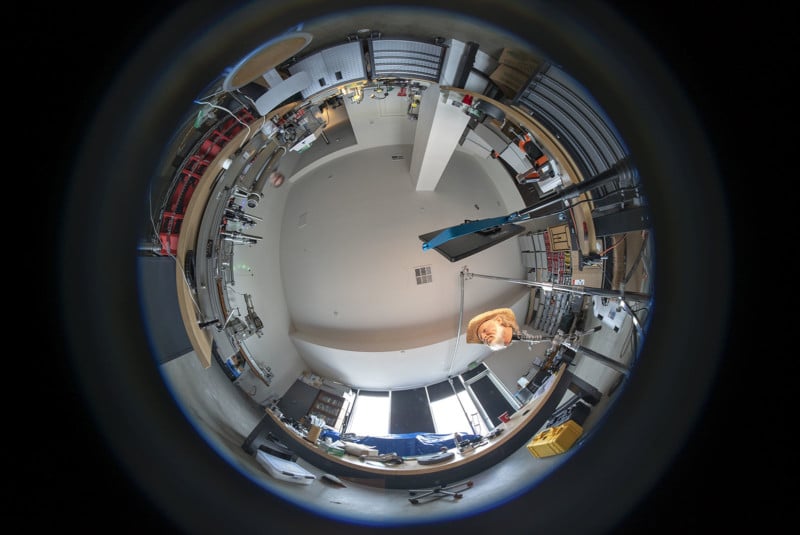 “The closest thing that’s existed to this is the 1970s classic Nikkor 6mm f/2.8 fisheye, which gave a 220-degree field of view, weighed 5 kg, and can be rarely found for $100,000 and up these days,” Cicala says. “The C-4 optics lens weighs every bit as much as the Nikkor, but should be far sharper, have less distortion and vignetting, and cost somewhat less than those do today.”

If you’re not ready to drop $39K on the C-4 Precision Optics 4.9mm f/3.5 at LensAuthority, you can also try before you buy by renting it from LensRentals… for just $1,246 per week.

The Leica M10 Monochrom is Great Not in Spite of its Weaknesses, but Because of Them