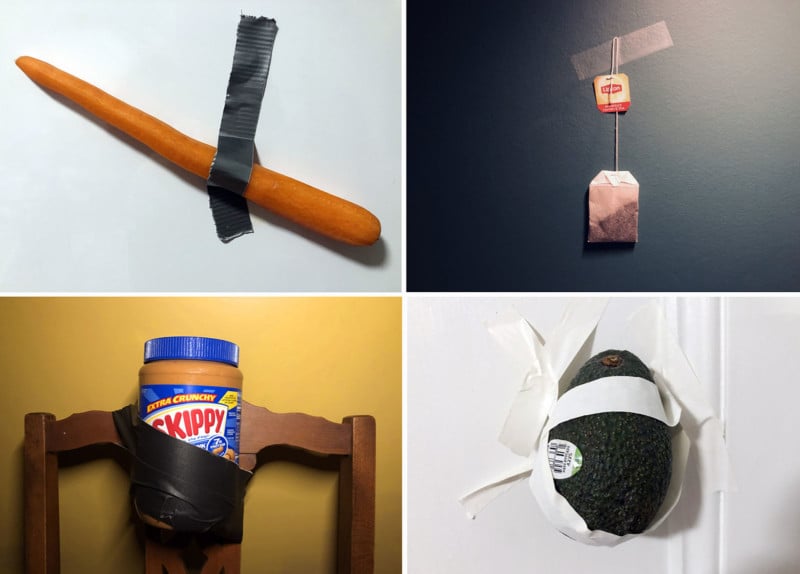 After 14 years as a professional photographer, I’ve decided to become a real artist. The pieces above, which I’ve birthed over the past 72 hours, show what I’m evolving into as a creator. I present to you my Suspended Sustenance, Part 1 (foodstuffs, wood, paint, tape, 2019).

Honest, I couldn’t be more pleased with my career move. No more carrying around 12 pounds of silicon, rubber, and glass at events until my back and shoulders ache. No more slaving long nights in front of a monitor to remove teenagers’ braces in Photoshop, or liquify brides’ belly fat.

You see, while most photographers work like dogs and try not to starve, celebrated conceptual artists — say, Maurizio Cattelan or Piero Manzoni — need to come up with just one or two inspired ideas a year, perhaps while they’re taking a shower or sitting on the toilet. Hell, the idea can even be a toilet. (Duchamp lives!) Or their artwork can consist chiefly of what normally goes into the porcelain throne, as is the case with Andres Serrano (urine), the aforementioned Manzoni (excrement), and Lani Beloso (menstrual blood). Only philistines and low-class naysayers would object.

Conceptual art is readymade for me. After coming up with the idea, you can often execute it in mere minutes, and exhibit it to the likely delight of the world’s curators, critics, and other art cognoscenti.

Presumably, you’ve heard about the past-its-prime, duct-taped-to-a-wall banana that sold for $120,000 at Art Basel in Miami Beach late last week — twice. Such a brilliant piece! It’s like Billy Bass, the singing-fish wall decoration, but with fruit! And without the godawful warbling! And about 4,000 times more expensive!

Maurizio Cattelan's latest provocative work — a banana taped to a wall with duct tape — was sold for $120,000 at Art Basel Miami. "The fact that somebody buys it makes the piece," the founder of the gallery that represents Cattelan said.https://t.co/7ytcomLlAE

WATCH: Man eats banana 'art work' that was duct-taped to a wall and sold for $120,000 at Art Basel in Florida; the man was escorted out by security pic.twitter.com/DEpUuROMnh

However, a word of caution is in order here. You might assume that going down the conceptual-art path is easy. In truth, only those who possess the soul of an impish visual poet, such as Cattelan and myself, can pull off these artistic triumphs. Just as importantly, in order to thrive, one needs to write a story that’ll impress the art world — an artist’s statement that speaks the language of its eminent gatekeepers.

With these four liminally connected pieces, I simply attempted to bring viewers face to face with their own preconceived hierarchy of cultural values and assumptions of artistic and monetary worth. Each object is a study in elegant tension that propels the beholder forward into a multilayered exploration of the classically beautiful versus the pedestrian common, while simultaneously pulling him/her/ze/them back in a quest for the ‘original’ source or referent that underlines this expansive vision.

Obviously, these works also address biopolitical issues, as well as the kind of transversal pursuits of purity that we naturally engage in when we probe and then illuminate the ontological space between the worldly and the sacred on the one hand, and para-fictional constructs of reality (or ‘reality’) on the other.

While I’m waiting for various Manhattan galleries to start fighting over who may represent me, I’ve put my primogenial four pieces on eBay (in part to demonstrate my strong proletarian leanings). Buyers may purchase them together for just $250,000, and receive free shipping! I’m even offering PetaPixel readers 10 percent off… so you know I’m not just some greedy arthole.

About the author: Rogier van Bakel runs Eager Eye Photography, a full-service photo studio near Bar Harbor, Maine. The opinions expressed in this article are solely those of the author. Van Bakel was previously featured on PetaPixel with his affecting portraits of firefighters.

These Guys Created a Low-Budget Shot-for-Shot Remake of the Star Wars: The Rise of Skywalker Trailer

You Can Still Buy a Brand New Nikon F6