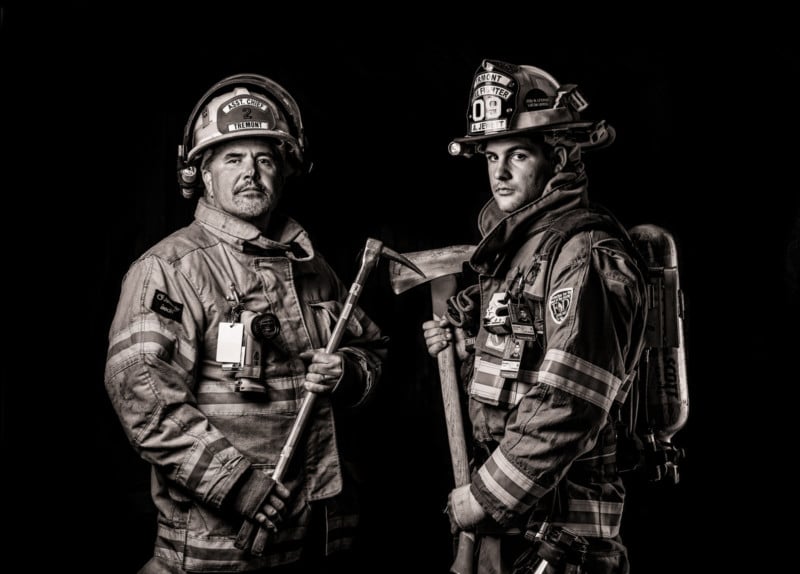 On January 17 of this year, I suddenly found myself in a terrifying, all-too-real nightmare. I was standing on the edge of a frozen lake near my home on Mount Desert Island, Maine. In front of me were snowmobile tracks that disappeared into the blackness of the frigid night. I knew that my 13-year-old daughter, Jolie, was a passenger on that snowmobile; and I had just received word from local firefighters that the tracks ended in open water.

That’s it, I thought. I’ll never see her alive again.

As I fought a wave of dread and grief, I began to think how I would break the news to my wife, who was stranded at LaGuardia airport in New York, trying to make her way home, and who was expecting me to call her with news of our missing girl.

Hours earlier, Jolie had gone snowmobiling with Julia, her best friend, and Eli, Julia’s dad. They were supposed to be back before dusk, around 4 pm, but now it was 6:30 and no one had seen them. A search-and-rescue operation had been launched more than an hour earlier. Members of the Maine Warden Service, as well as volunteer firefighters from the towns of Mount Desert, Tremont, and Southwest Harbor, had sprung into action and fanned out across the area.

Twice, news crackled over responders’ radios that a light had been seen moving through the trees, and that yelling had been heard. But those pinpricks of hope turned out to be false. The lights and voices belonged to other people in the search party. Jolie, Julia, and Eli had been swallowed by the stygian darkness. The temperature was 25˚F and dropping.

Finally, close to 8 pm, we got news that had seemed increasingly impossible with each passing minute. The three had been located, and they were alive. After they’d crashed through the ice, they had apparently managed to swim ashore, then climbed onto a cliff to get a better sense of their location.

Hypothermic and dizzy with fatigue, they were extracted from the treacherous site by firefighters using specialized hoisting equipment. Ambulances then took them to a hospital 20 minutes away, where they made a speedy recovery.

How do you thank strangers who risked life and limb to save your child? I sent the rescuers a letter, but it hardly seemed enough. Then it hit me. If I’d owned a pizzeria, I’d offer them free pies. If I’d been an accountant, free tax returns for all. It followed that, as a professional photographer of 13 years, I would make photos of the firefighters — portraits that would show them in a better light, literally, than they’d ever seen themselves before.

As it happened, I knew just the lighting scheme for such photos. Three and a half years earlier, I’d taken a week-long master class with the amazing Gregory Heisler. One afternoon, Greg demonstrated a three-light arrangement that produces beautifully gritty results. You place a key light with a large modifier in front and over the subjects; then you put two tall stripboxes six to eight feet behind them, pointed at each other. When you get the ratios just right, some of that rear light spills to the front, becoming rim light. It defines the outlines of clothing even on a dark background, and throws highlights along temples and cheekbones. 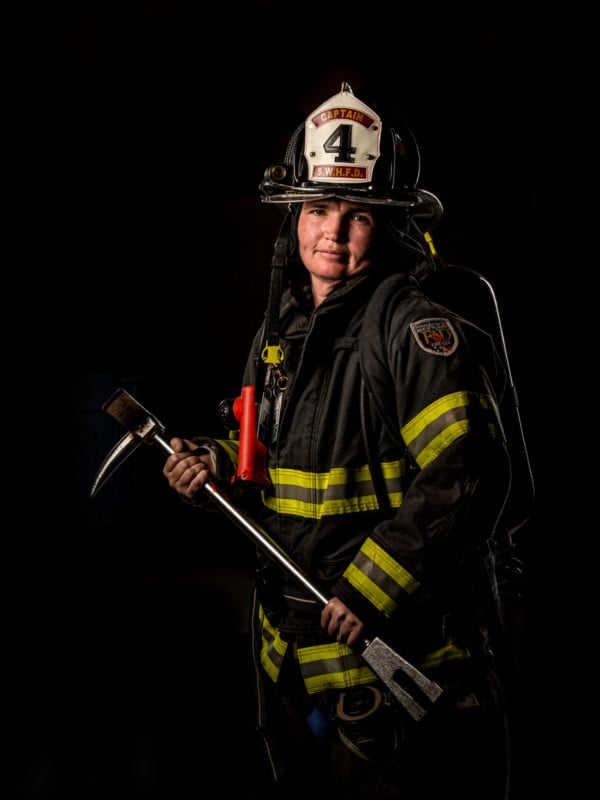 This kind of “hero” lighting works well on athletes, entrepreneurs, first responders, and so on. As a (primarily) wedding photographer, I’d never used it, because I don’t think my brides want to look rugged! But for the firefighter portraits I had in mind, this lighting setup seemed just about perfect. 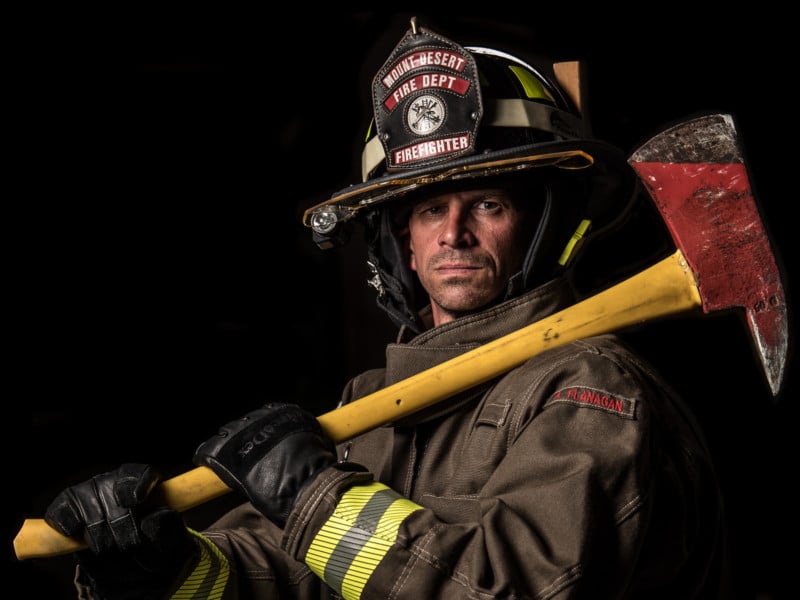 Over the summer, working in the dusky engine bays of the firehouses, killing almost all the ambient light with my exposure settings, I made portraits of 43 volunteer firefighters. There were construction workers and fishermen, bankers and innkeepers, scientists and store clerks. I was repeatedly struck by how ordinary they looked in their civilian clothes, and how they appeared to grow taller and tougher when they put on their uniforms. 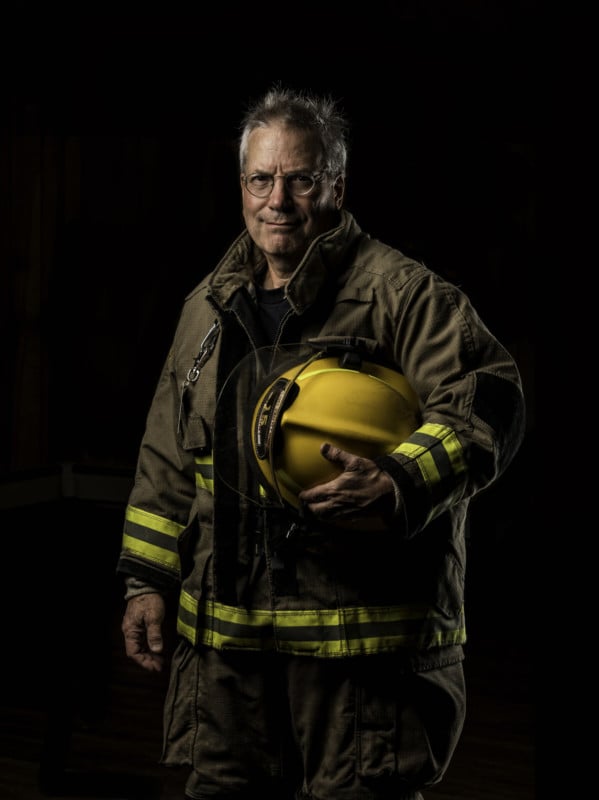 When I saw the photos on my big monitor, it also seemed to me that their personalities shine through — more so than in some of my other portraiture. Maybe we were bound by our shared experience of that unnerving night, and they trusted me implicitly. Maybe smiles that people produce at a photographer’s prompting are a deterrent to truth, so perhaps the fact that I asked the firefighters to look steely, not smiley, contributes to the apparent authenticity of the portraits. I’m at a loss to understand it, but I’ll take it. 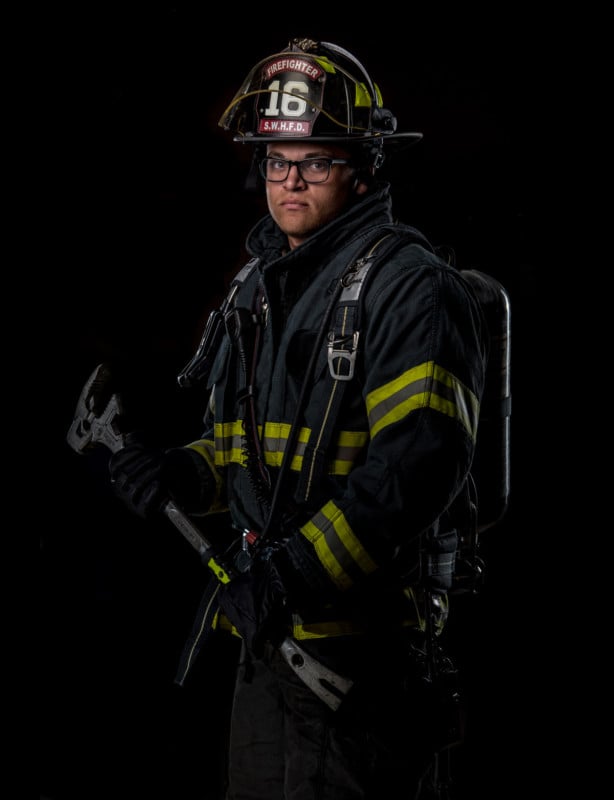 By the way, it dawned on me only recently why it’s so impressive what firefighters do. Survival is the name of the evolutionary game. That is, all of us are genetically wired to flee life-threatening danger. Firefighters have somehow tweaked that most basic of instincts to go the opposite way — literally. They run into the burning building. They walk towards the exposed powerline, the slippery cliff, the paper-thin ice, the accident scene of carnage and confusion. 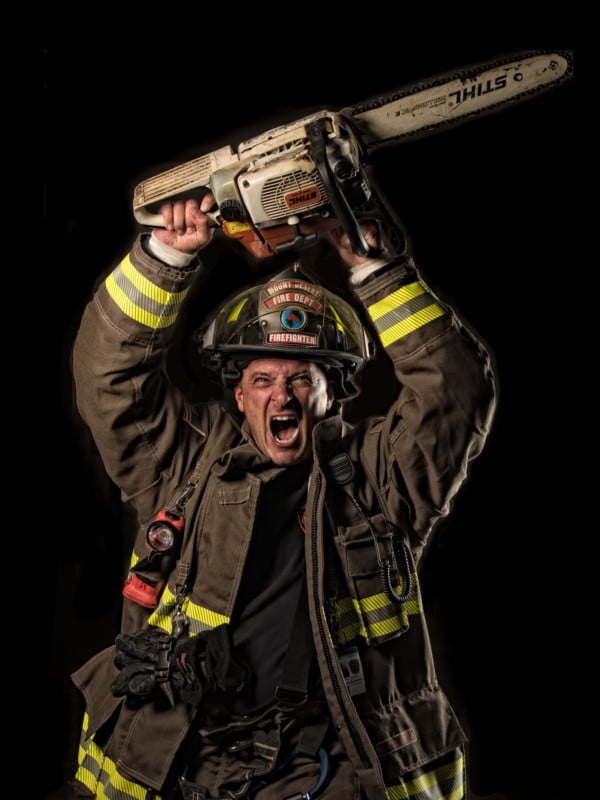 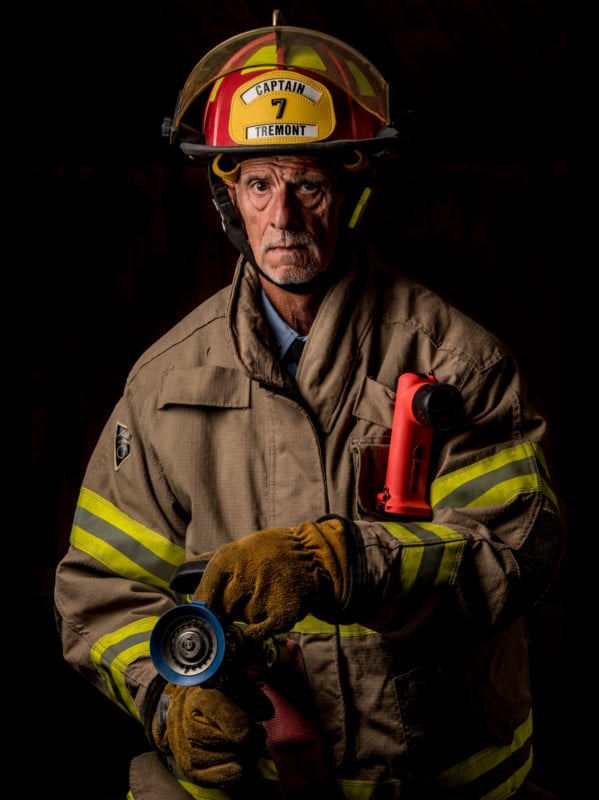 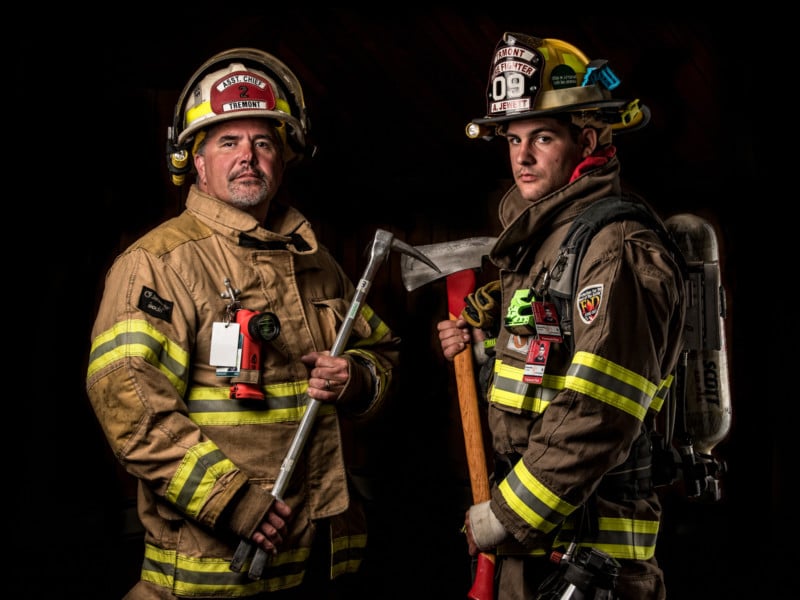 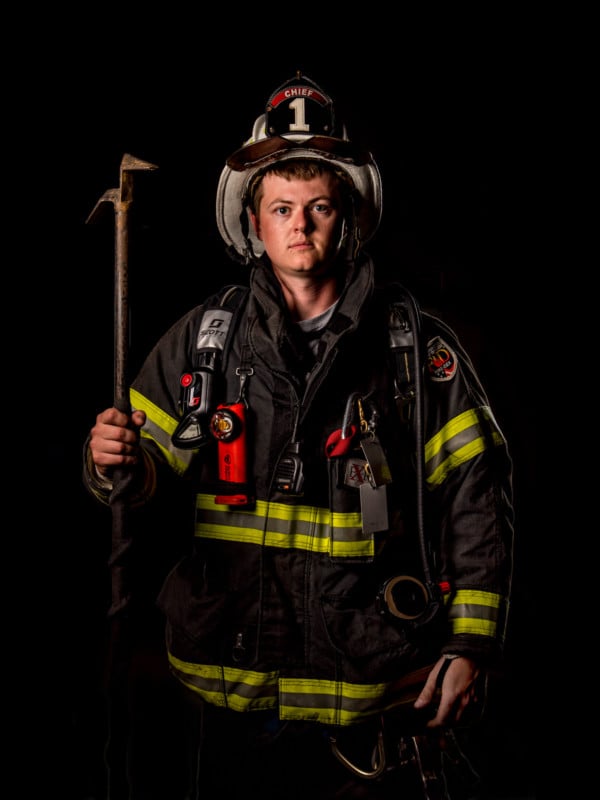 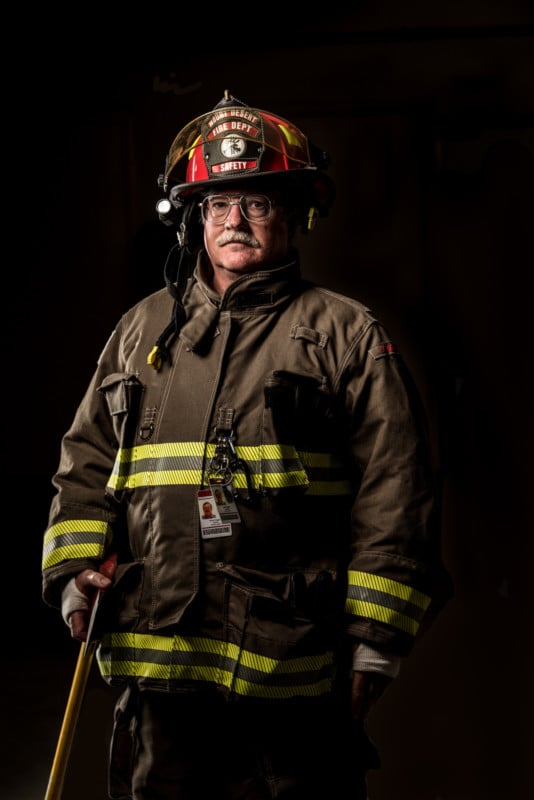 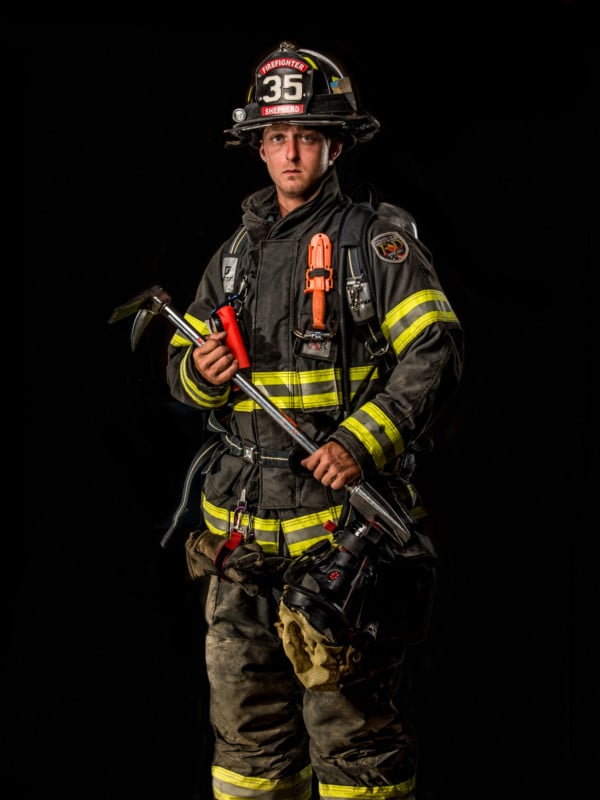 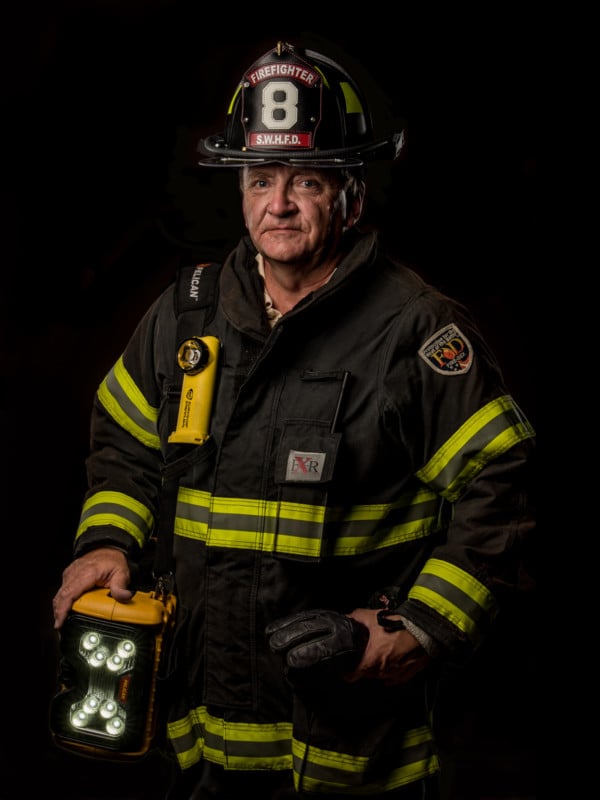 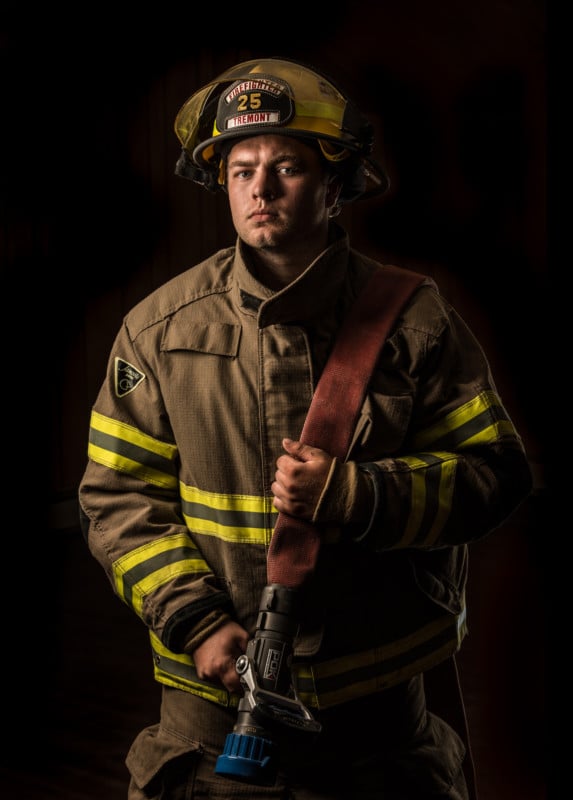 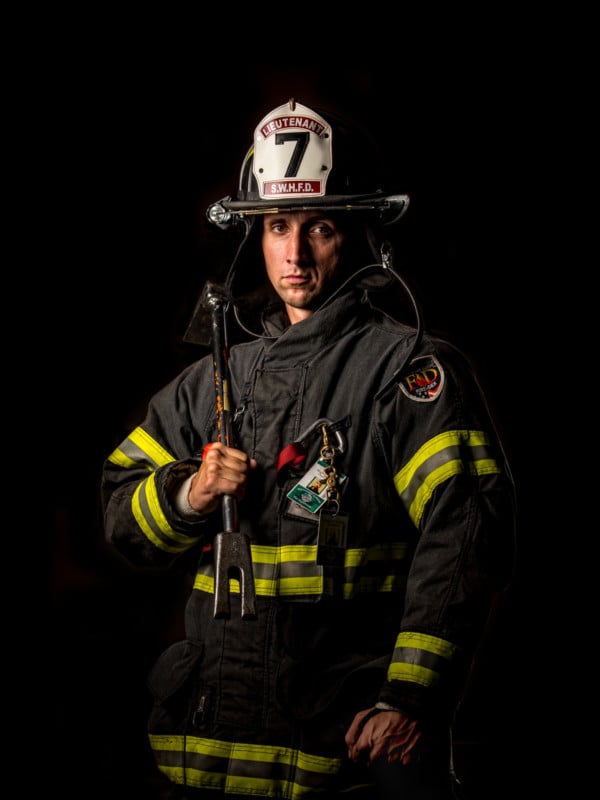 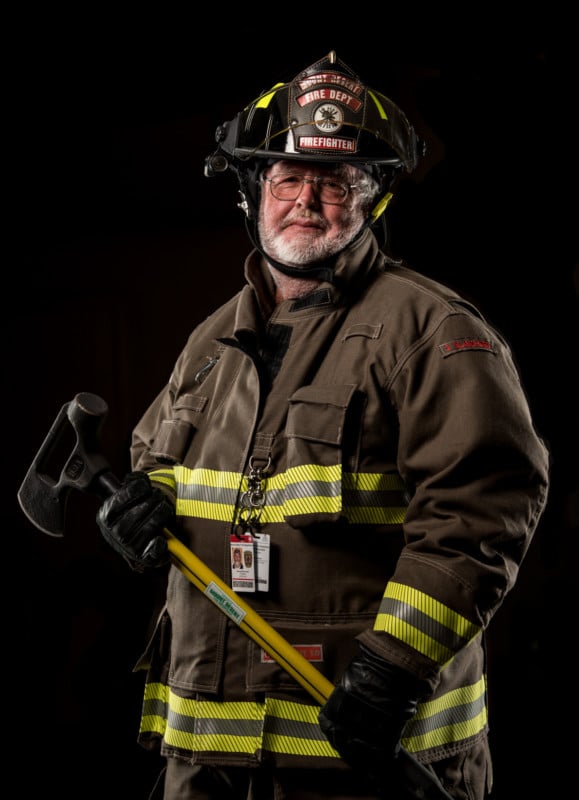 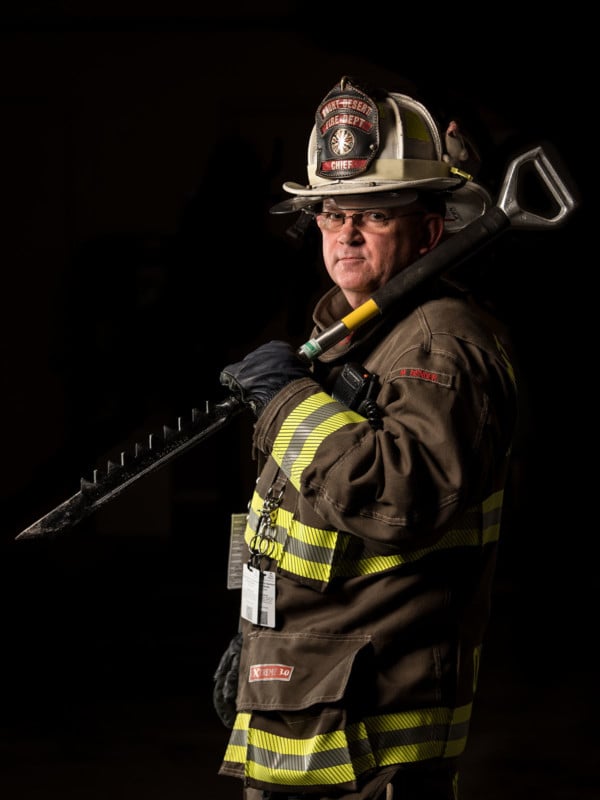 My wife and I are lucky to have our daughter back, and lucky to have these men and women around us. There are more than 750,000 volunteer firefighters in the United States. As we found out first-hand, their selfless actions can literally mean the difference between life and death. We salute them all.

About the author: Rogier van Bakel, a wedding and portrait photographer, runs Eager Eye Photography near Bar Barbor, Maine. The opinions expressed in this article are solely those of the author.

Stop Using Tape to Attach Your Gels: How to Use Magnets Instead