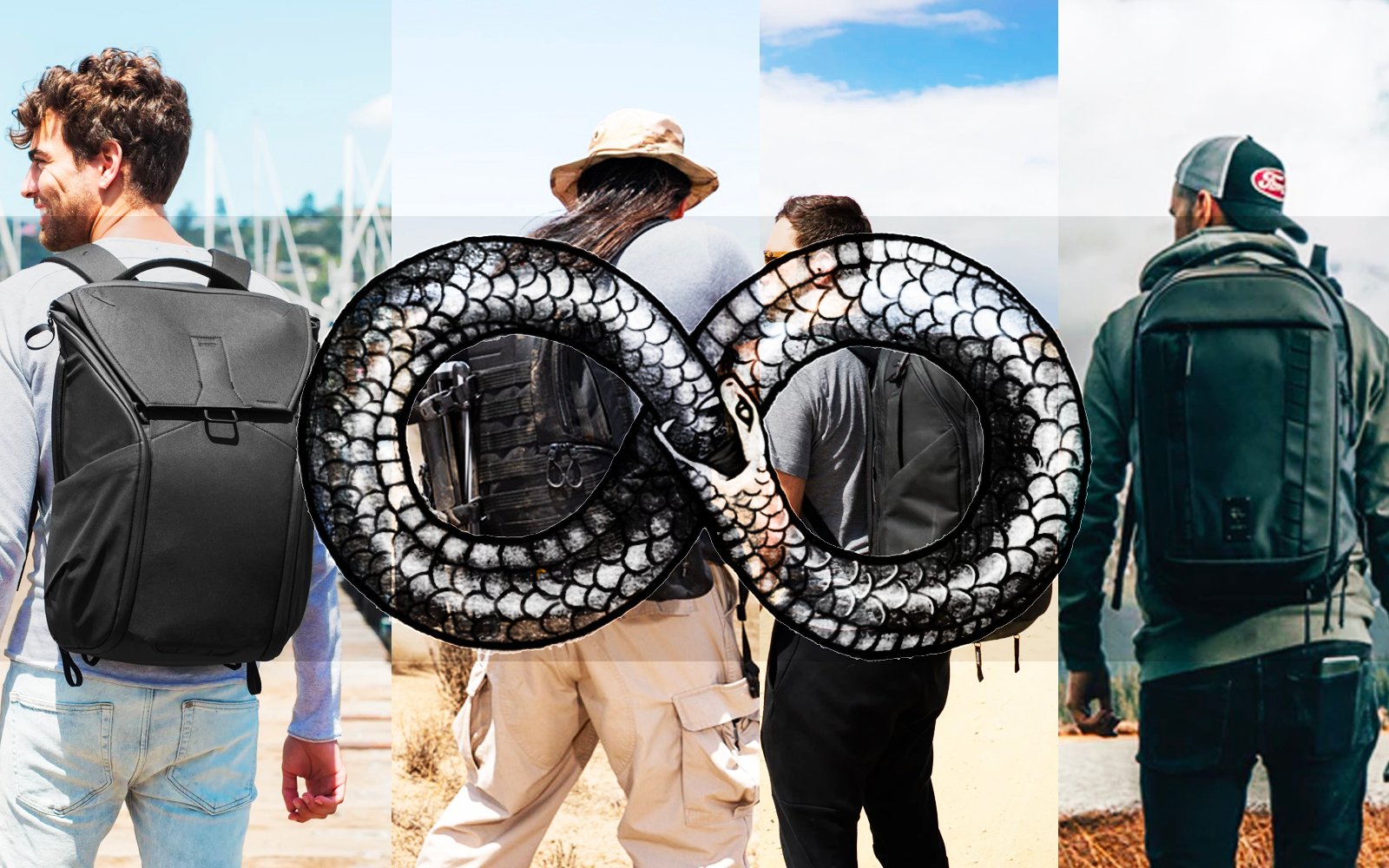 Right now if you head over to Kickstarter and search for “camera bag,” three active choices pop up. That’s three more camera bag ideas vying for your attention in addition to the tons that have hit Kickstarter over the years and the hundreds more made by larger brands like Lowepro, Manfrotto and Think Tank.

Every year we get another stack of “new” and “innovative” camera bag ideas from a host of different companies all trying to convince you that they have finally solved the camera bag problem. Except… this has been everyone’s slogan for the past ten years. So very clearly the camera backpack problem has not been solved. Sadly, despite their pomp and circumstance, no one is actually trying to solve it.

Eight years into reviewing camera backpacks, I can definitively say that there isn’t a one-size-fits-all backpack idea; no one has gotten it right yet, and this whole industry is stuck in a rut where everyone keeps trying to mix up the same few ideas in new ways in an attempt to get your hard-earned dollars.

Kickstarter videos are especially notorious for claiming they have a single answer for all the camera backpack woes.

And the thing is, even if the backpack does introduce new features that are actually compelling, in order to succeed with that backpack, the designers have to make the same set of concessions, resulting in the same overarching problem no matter how good one or a few of those implemented ideas are.

That problem is that in order to achieve mass appeal, you have to try and make your backpack hit just the right number of high notes with the most people, and that results in a backpack that gets some of its features for some buyers right some of the time, but never gets everything right for all customers all of the time.

So no matter how many new backpacks we get that shuffle around the same design aesthetics in a way that they promise will be the best thing ever, they all eventually slip into this same problem. And the thing is, it’s not a problem that I think can be solved with the methods these guys are going at it.

As a photographer myself, and speaking to my network of photographer friends, every single one of us laments our camera backpacks. Whenever a large group of us are together, we all end up talking about each other’s bags, and I’m not exaggerating when I say that not a single one of us actually loves everything about any one of our hundreds of bags.

I personally have a backpack wall with seven bags hanging on it right now. Of those seven, I generally use two or three regularly. Of those two or three, I actually don’t like any of them all that much. It’s more of a case of tolerating them more than anything else available. It is a sort of war of attrition I am forced into.

“But Jaron, just taking a step back, it’s absurd that you have seven camera backpacks at all. Each of them was several hundred dollars apiece, and you’re telling me that none of them were capable of being the best single backpack?”

Why yes, me. I am saying that. I’m saying that making that single, perfect backpack may actually be impossible.

Last year, I reviewed Peak Design’s Travel backpack, a backpack that was supposed to fill pretty much every need of day-to-day life on the road. It wasn’t designed to take the place of either of my backpacking camera bags (with the internal frames and whatnot), but it was supposed to fill the gaps that those bags aren’t particularly useful for.

As great as backpacking camera bags are, they really suck to try and travel with because of their awkward dimensions and dangling straps (dangling straps are the worst for squeezing through tight spaces or trying to cram into overhead bins). When I saw the Kickstarter, the concept seemed really spot on. And while it did get some things right (like the really awesome small bags for toiletries and tech cables), the actual backpack was seriously flawed. I wrote a couple thousand words about why the bag, to me, failed and was seriously disappointed with what I was hoping would cut my bag wall down to just two.

So as such, I still find myself begrudgingly using Peak Design’s Everyday Backpack pretty frequently, but I lament it on a regular basis. The name of the backpack is especially irksome, because though I want a backpack that I am comfortable using “everyday,” this one is simply the least irritating to use in the capacity. “Least irritating” is not a moniker you want attached to yourself as the only form of praise, but it’s all I can grant the Everyday Backpack after a couple of years trying to make it work. I honestly can’t wait to get rid of it in lieu of something else, should something else ever emerge.

But last week, there I was, using it on an international trip and hating every second it was on my back.

Yesterday, Peter McKinnon launched his Kickstarter in collaboration with Nomatic, and there are parts of the design that look seriously compelling. For example, I like the idea of using magnets for dividers (I think it’s magnets), though I have my doubts that they can stay in place when packed against the weight of a full-size camera and a 70-200mm lens. But the idea is cool, and I applaud that.

The thing is, I am betting that if I got this bag, it still wouldn’t feel like it ticks every box that I am looking for. It’ll probably hit about 60% of my wishes, and join my wall of bags where I might pick it up on occasion. In order to advertise itself as being great for everything, it will likely end up not being a great choice for anything. It survives, maybe even thrives, at being a solid, average application of bag technology.

And that sucks, but it’s also by design whether or not the guys at Nomatic actually wanted that to be the case. In order to please the most buyers, a lot of concessions had to be made, conscious or not.

You’re not going to get people to buy it unless it looks really nice, which requires a certain type of material and a designer to make it. You’re not going to sell them if they’re too big, or too expensive. You won’t get the word out about them unless you partner with a big name, like McKinnon (unless you are Peak Design because you already did that once and now you have enough clout on your own).

All of these things work towards that bottom line, and that squeezes what you can do with the bag. By the time it has hit production, you’ve made a good bag. Not a great bag, just a good one.

Pretty much every single bag maker who wants to make a “backpack for everyone” or a “bag for everyday life” falls into this rut. The only exception is when a company picks a niche, and one example I like to point to is Shimoda. They’re making a backpack for a very specific audience, never claiming they’ve made something for everyone. They’re not trying to do the backpack for the masses, and as such didn’t worry themselves with making a Kickstarter video that’s supposed to impress 95% of consumers. But because of this, they also won’t get all the coverage something like McKinnon’s bag will. Less coverage means less money, which means it’s harder to keep making bags. They also launched a new Kickstarter yesterday, and McKinnon’s bag is likely to overshadow them.

And that’s the problem. When you finally do set out to make a bag for a specific person to where they will actually be happy with the bag, you are limiting yourself to a small audience. You just won’t move the needle much. In order to make those big bucks, you kind of have to make a bag that’s not very good. It’s a system that churns out a regular flow of backpack designs that cannibalize ideas off each other in a never-ending circle, and no one bag has been able to live up to its promises.

I don’t mind having seven backpacks on my wall. What I do mind is that five of them at one point or another claimed to be a backpack for any, everyday use. In the end, all of them aren’t very good at doing any one thing and at some point just got relegated to the wall almost in permanent storage.

What I think would be ideal is a set of backpacks all with distinct uses, all great for a specific purpose. At least then my wall of bags would feel like it had a reason for being there other than to remind me of the thousands of dollars I’ve sunk into them. If more bags were designed with the mentality that Shimoda is born from, then I think many of us would be a lot happier with our bag options.

Unfortunately, due to the nature of the business, I just don’t think this is as likely as the situation where more bags with a wider, overarching generalized idea of what the nameless photographer wants are made, and the continued cycle of rehashed ideas into “new” bags just keeps chugging along.