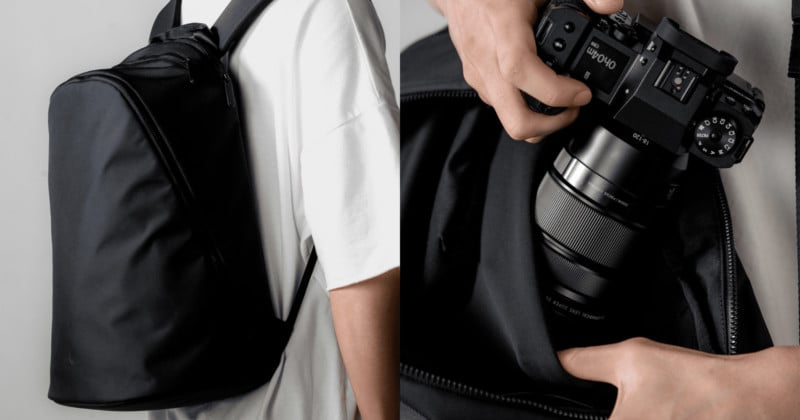 The Kyu Daypack is a new bag that is best described as a minimalist backpack that can safely hold a camera rather than what is typically described as a “camera bag.”

TranSe, a Japanese imaging brand, launched the Kyu on Kickstarter with the pitch that it is both functional for everyday carry — including cameras — but also minimalistic and simple so that it can “reasonably” fit into users’ everyday lives.

The designers explain that the problem with standard camera bags is that they are usually constructed of a hard material on the outside or they have strong, stiff partitions inside to hold a camera — or both. While these are usually necessary for keeping a camera safe, they are also what the Kyu team describes as an “obstacle” to daily life. They, instead, wanted to create a bag that was still able to safely hold a camera while also eliminating the bulk of traditional camera bags.

The result is the Kyu daypack which is not so much a camera bag as it is a simple backpack that has the ability to hold a camera safely. The Kyu is made of a soft nylon fabric that is water repellent and that the designers say fits well in everyday use and does not look like conventional camera bags. The bag uses a larger zipper design, which the designers say results in less physical stress on the materials when opening from the side, which means it is easier to access the interior and camera pouch.

The term “pouch” is probably best to describe where the camera sits since it’s not at all like what most camera bags use.

“One of the main features of Kyu daypack is the camera compartment,” the team says. “Conventional thick dividers are good for protecting the camera but inconvenient for daily use. Therefore, an elastic cushioning material is used for the camera compartment. This provides both camera protection and everyday usability.”

This sleeve is made from three layers of 0.88mm elsatic material (for a total of 2.64mm) and the lining of the surface fabric is surrounded by a cushioning material that softens any impact that might come from the outside of the bag. 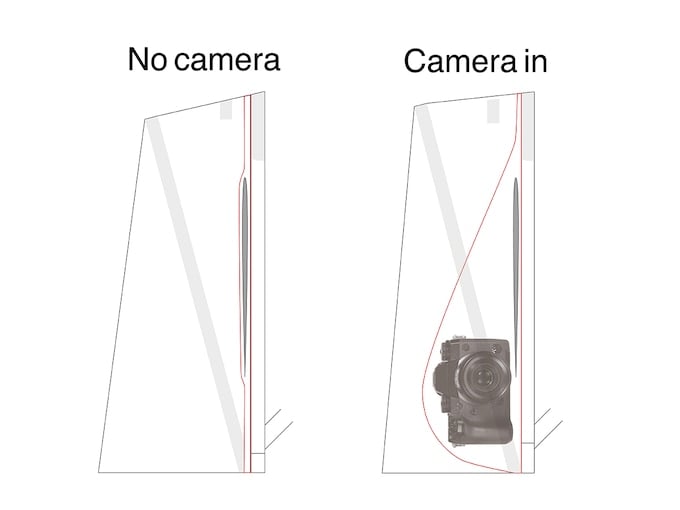 That compartment is made of an elastic material that cradles a camera but also can retract if there is no camera in the bag, making the Kyu more usable outside of camera carry situations.

“[The Kyu] has a kangaroo pocket-like structure that keeps the camera off the ground and prevents it from being impacted, thus protecting your precious camera from shocks when you put the backpack down,” the team adds.

The Kyu is clearly not meant to be a dedicated professional camera bag, but rather one that will work for more casual photo excursions into the city. It can fit small DSLRs and mirrorless cameras but won’t be able to handle the size of a full-frame DSLR, something like the Nikon Z9, or a large zoom lens like a 70-200mm, but it’s also not meant to.

Aside from the camera pouch, the Kyu features a main space on the interior of the bag, an outside pocket, an inside pocket, and a sleeve that can just barely hold up to a 16-inch MacBook Pro (though the team says it is technically rated for computers up to 15-inches in size). All in all, it has a maximum capacity of 18 liters. The design is simple and while the straps are adjustable, the bag is probably most comfortable for small lengths of time, and the Kyu team says it’s best for commuting to work, school, or taking on short trips.

The Kyu Daypack can be backed on Kickstarter starting at about $114. The company intends to deliver to backers by January of 2023.