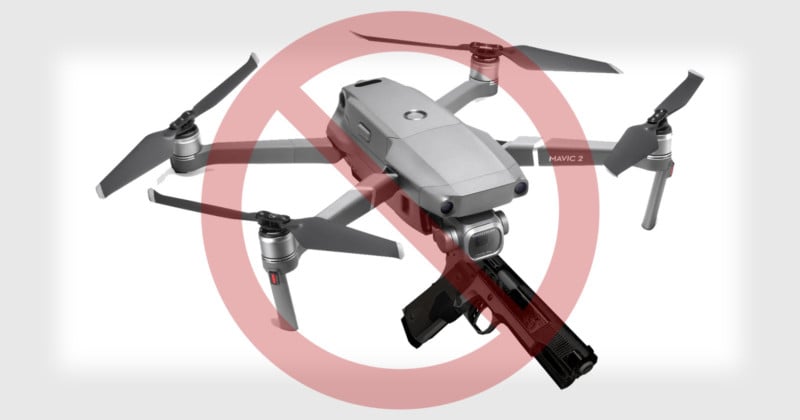 The FAA has published a notice and is sending out emails warning drone owners and the general public that weaponizing drones is illegal.

The notice, published yesterday and titled “Drones and Weapons, A Dangerous Mix,” warns that it’s not just firearms on drones that will put you on the wrong side of the law — other “dangerous items” will too.

“Perhaps you’ve seen online photos and videos of drones with attached guns, bombs, fireworks, flamethrowers, and other dangerous items,” the FAA writes. “Do not consider attaching any items such as these to a drone because operating a drone with such an item may result in significant harm to a person and to your bank account.”

Weaponizing a drone is specifically a violation of Section 363 of the 2018 FAA Reauthorization Act, titled “Prohibition Against Weapons,” which reads: “Unless authorized by the Administrator, a person may not operate an unmanned aircraft or unmanned aircraft system that is equipped or armed with a dangerous weapon.”

A “dangerous weapon” is any item that is used for (or readily capable of) causing serious bodily injury or death.

If you get caught with a weaponized drone, you face a hefty fine of $25,000 for each violation. It’s an amount that will deal “significant harm” to most people’s bank accounts.