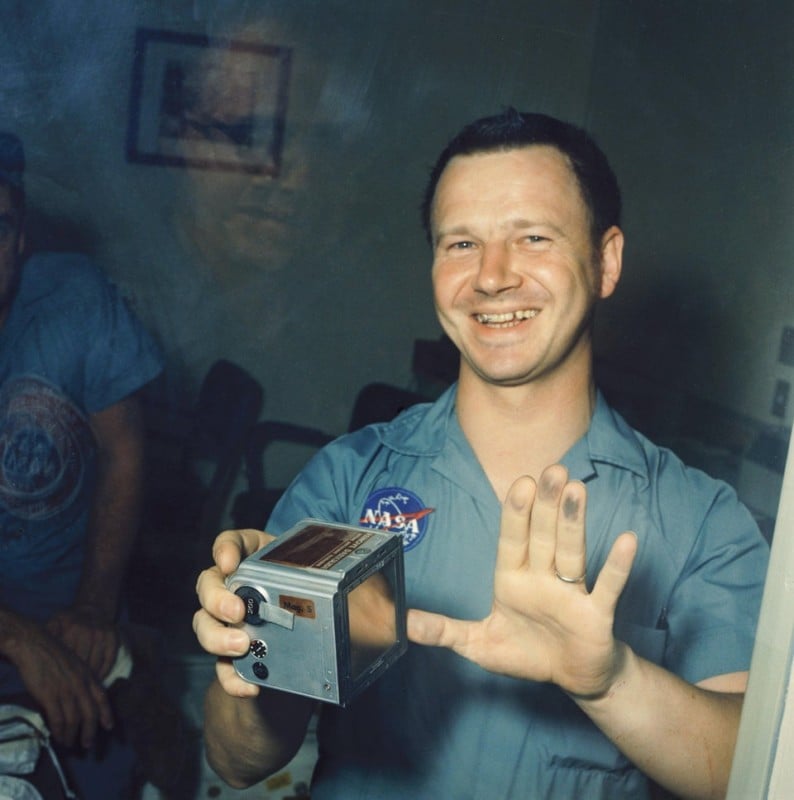 After the Apollo 11 mission that successfully landed the first humans on the Moon back in July 1969, a NASA photographer unexpectedly became the first non-astronaut to touch Moon dust with his bare hands.

Upon splashing back down on Earth, astronauts Neil Armstrong, Buzz Aldrin, and Michael Collins were immediately placed in quarantine and evaluated for weeks in case they had brought back any “bugs” from the Moon. But while that was going on, other NASA employees worked on the gear and samples that had been brought back.

One of these workers was NASA photographer Terry Slezak, who was tasked with unpacking the film canisters containing Moon photos. And one particular canister, Apollo 11 Lunar Surface Hasselblad 70 mm Film Magazine “S”, was accompanied by a note from Aldrin stating that the canister had been dropped on the lunar surface.

“I started unpacking the film, which was double-bagged in plastic containers,” Slezak states in an interview for NASA’s Oral History Project. “[W]hen I came to Magazine S, I opened the Beta Cloth belt, and in there was a note from Buzz Aldrin. He said, ‘This is the magazine that Neil [A. Armstrong] had dropped on the surface, but this was the most important magazine.'”

Slezak handled the canister behind a biological barrier with his bare hands, worrying more about the dust’s potential risk to the film than to his own health.

“When I pulled it out it was all covered in this black material — looked like lampblack almost — it was really dark black with little bright speckly things, which turned out to be little bits of glass from the lunar surface,” Slezak says. “So everybody said, ‘What is that?’ I said, ‘It’s Moon dust. That’s the only place it’s been.'”

“I didn’t really think too much about it at the time. The only thing I was concerned with was this dust, which is so abrasive, it’s like carborundum [silicon carbide (SiC)], and I was thinking, ‘If this stuff has gotten into the magazine, the film is going to be all scratched.’ So that’s really what I was worried about.”

Slezak was then required to pose for a photo and get decontaminated himself.

“So they had to shoot a picture of me with the Moon dust on my hand,” he says. “Then according to protocol, the other people in the room had to leave and I had to strip off my clothing and clean off all of the work surfaces with Clorox bleach, then go to the showers.”

After the Apollo 11 crew learned of what happened, they put together a special board commemorating the photographer’s “first contact.” The board contains six items related to the event and a signed note that reads: “To Terry Slezak, A ‘dirty’ photographer. With best wishes.”

That special presentation board was just sold at a Sotheby’s auction this month for $225,000.

And that’s how a photographer became one of the first humans to ever come in contact with Moon dust.

(via Space and Sotheby’s)

Image credits: All photos (unless otherwise noted) by NASA