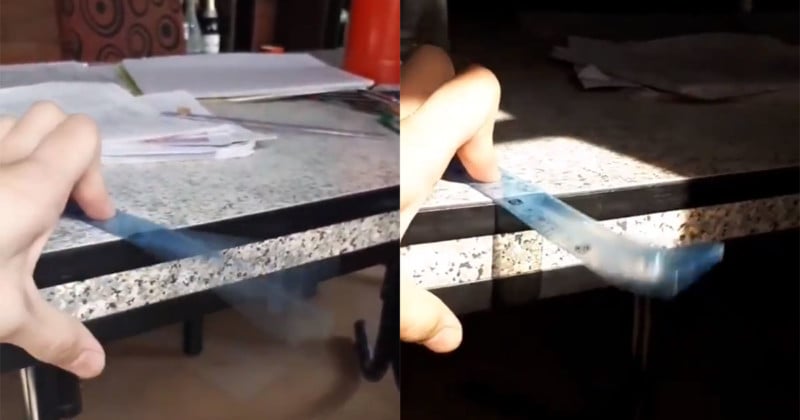 Want to see how cameras automatically adjust shutter speed to compensate for changing light conditions? A simple experiment with a ruler can help you visualize it in an interesting and unusual way.

Here’s a short GIF that has been going wildly viral online after being shared on the subreddit /r/blackmagicf**kery yesterday. It shows what a ruler flicked off the edge of a table looks like in the shadow versus in a patch of sunlight:

The wacky look of the ruler is caused by something known as the rolling shutter effect, a side effect of the fact that CMOS sensors capture images by scanning across the frame one row at a time — here’s an in-depth article that looks at the math behind it. Rolling shutter effects be seen in footage of everything from guitars to airplane propellers.

In the shadows, the camera uses a slower shutter speed to capture enough light for well-exposed frames. This slow shutter speed captures a lot of movement of the ruler in each frame, so the ruler looks blurred (like what our eyes see in real life) and the rolling shutter effect isn’t discernible.

When the ruler is moved into the sunlight, the camera switches to shooting with a much faster shutter speed since less time is needed to properly expose each frame. This results in a sharp ruler in each frame without the motion blur, allowing us to see the rolling shutter effect clearly. And the vibration frequency of the ruler lines up with the camera’s frame rate in such a way that the ruler’s motion looks like a strange slow-motion wobble.

A similar phenomenon can be seen when a helicopter’s rotor is synced with a camera’s frame rate — if it’s perfectly synced, the rotors look frozen, and if it’s slightly different, the rotors can look like they’re turning in slow motion.