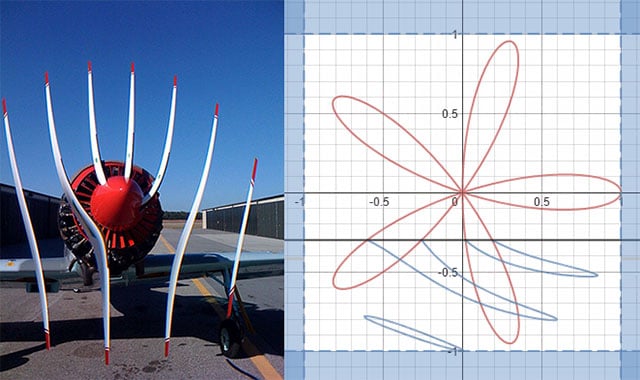 If you’ve ever photographed spinning airplane propeller or helicopter rotor blades with your smartphone, you may have found that the spinning blades were turned into bizarre shapes in the resulting photo. What you’re seeing is distortion caused by a rolling shutter, when a CMOS sensor captures a scene by scanning across it very quickly rather than capturing the entire frame at once.

Someone who goes by Hunter5625 online wanted to explore the math behind how a rolling shutter distorts spinning objects, so he put together a rolling shutter simulator using the free online graphing calculator offered by Desmos.

Here’s an animation showing exactly why a rolling shutter captures a spinning propeller as slivers:

That’s how you get the strange airplane photo above, captured by Soren Ragsdale with an iPhone back in 2009.

“How the simulator works is, in simple words, making a function in polar form go through a certain algorithm and outputting an image,” Hunter5625 writes. Head on over to the online simulator if you’d like to play around with this concept yourself with different speeds an different objects. We also published a math-y explanation of this phenomenon last year in case you’d like to read more.

Photographer’s Business Booms After Her Viral Act of Kindness