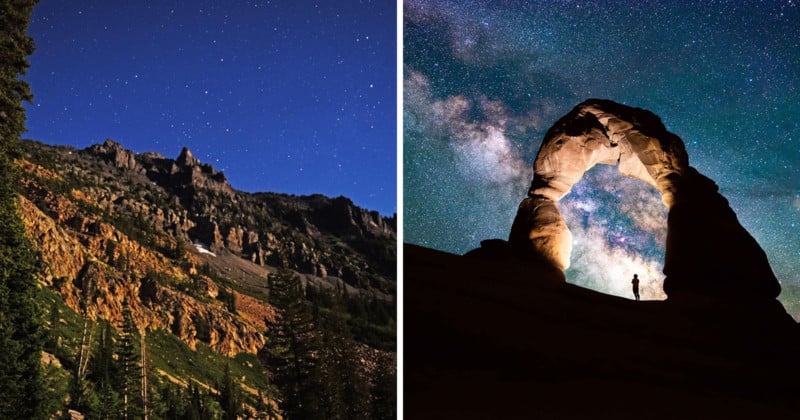 Two years ago, I splurged some money and bought a camera because I’d always wanted to try to take pictures of the stars. The left photo above was the only decent picture out of 700 taken on my first clueless attempt. The right photo was taken about 2 weeks ago. Don’t let your dreams be dreams.


I can distinctly remember the first time a camera was put into my hands. It was the wedding of one of my oldest cousins, and I was 10 or 11 years old. A family friend was the photographer, and he must have noticed me walking around bored and clueless, because he took one of his SLRs, put it in my hand with a full roll of film, and told me to help him take pictures.

None of the photos turned out. I was a kid and I had no idea what I was doing, but 15 years later, that moment is still crystal clear in my memory. It spurred me into action, asking for digital cameras for my subsequent birthdays (my first was a 3.2MP point-and-shoot), saving up my lawnmowing money all summer to buy a 512MB Compact Flash memory card, and messing around with the old Pentax K1000 that had been collecting dust in my dad’s closet — whenever I could afford film and processing, that is.

Unfortunately, somewhere between working two jobs, trying to succeed in high school, beginning college, and spending 2 years abroad in Eastern Europe, I simply lacked the time, money, and know-how to pursue photography beyond the capabilities of my cell phone, and my interest in photography faded.

There was, however, always a shade of desire. I remember being jealous of friends who owned big, hefty, DSLRs. I was green with envy when my mom decided to buy my dad a Nikon D3200 for his birthday. I stole it often to take pictures and it didn’t take long before I knew more about it than he did. My time to own a DSLR came when I accepted an internship at a local art museum that needed me to act as an event photographer and videographer. I purchased a Nikon D3300 with a kit lens and a $20 tripod and immediately got to photographing everything in sight.

Those first couple of months, I tried to take pictures every day. I didn’t always succeed, but it taught me to be constantly looking for compelling subject matters. Growing up in the heart of Utah, landscape photography was a natural fit: there are canyons every 30 feet (it seems), 5 National Parks, a variety of National Monuments, and more to do than anyone could in a lifetime.

I spent much of my time hiking on the weekends and I had a close friend with whom I’d take road trips every year. Glacier or Banff, the Grand Canyon or California, wherever sounded most exciting. Landscape photography, as I often say, meant simply doing what I already did — but bringing back evidence.

From the get-go, I also had a strong desire to take pictures of the stars. Humans have always had this primordial fascination with the stars, and I’ve always felt that strongly. Many a summer night growing up was spent on my rooftop watching the sky shift from sunset to blue hour to suburban starscape. For that reason, the stars seemed a natural subject as well, and I can vividly remember my first attempt at capturing them.

My friend and I hiked a steep trail to a lake on the night of a full moon. It was nearly dark by the time we arrived at the destination, but the area was beautifully lit. I moseyed over to the far side of the lake, set up my tripod and camera and spent the better part of an hour troubleshooting. Simple photographic concepts — focus, aperture, exposure — became less intuitive at night. I guessed at settings, wrote them down, made slight adjustments, and tried again. 700 terrible photos and a few hours later, we made the long trek back down to our car, trail poorly lit by cell phone flashlight.

The whole night, the best photo I had managed to produce featured brightly illuminated cliffs and a few faint stars. My expectations for what I would be able to do were extremely high and I’d certainly fallen short, but at the end of the day, I was thrilled I could see stars at all. I went out the next night and the next night and the next night, always to different locations, getting more and more excited with each photograph that got closer to representing the vision I had for what my photography could be.

The follow-up to those feelings could only be described as an obsession. I was getting distracted at work because I was googling articles about night photography. I signed up for a dozen newsletters on various websites with tips and tricks. I began researching gear the second I realized that, well, an entry-level camera and a kit lens weren’t going to cut it. I thought I knew cameras because I understood the basic concepts of ISO, aperture, and exposure and (more-or-less) how they worked together in the daytime, but I purchased books that taught me to understand their effects and use them beyond simply to manipulate light.

I learned what a crop-sensor was and immediately ached for a full-frame camera, I began to study the construction of and limitations of lenses and I immediately began researching which lenses I needed to buy in order to increase the quality of my work. I read articles about low-light performance in various cameras, I read about sensor technology, I bought Photoshop and Lightroom and began to watch YouTube tutorials about Milky Way post-processing techniques. Star tracking and median stacking and focal blending were terms of which I had never heard, but with time, I began to understand and apply them.

Just as importantly, I learned how to compose an image. I bought a couple books that helped me understand the theory, but trial-and-error was the real teacher. As a trained Art Historian, I studied the likes of Ansel Adams, Eadweard Muybridge, and William Henry Jackson, even handling original prints of theirs, all the while trying to see through their eyes and understanding how to see the way that they saw.

Along those same lines, I studied the work of famous 19th-century romantic landscape painters like Thomas Cole and Albert Bierstadt, attempting to understand (and later replicate) what made their compositions compelling.

Miraculously, throughout this entire multi-year process, I began to see improvement. And as I saw improvement, my interest waxed instead of waned. That first year I shot upwards of 100 GB worth of photographic data. The next year, it more than tripled.

It’s important to realize in retrospect that improvement is often slow-going and always requires a lot of sacrifice and diligence. Nothing says sacrifice quite like taking an hour-long nap and then having to crawl out of a warm sleeping bag to go wander through the desert all by yourself (machete in hand, in case any wild animals want to tussle).

During the week of the new moon in June 2018, I spent 6 out of 7 days camping, on average driving 4 hours round trip to a camping spot dark enough to photograph the skies. I spent 4 of those nights sleeping in the driver’s seat of my car while the wind howled outside. I returned home with only a few worthwhile images to process (Good ol’ Ansel said it best: “12 significant photographs in one year is a good crop.”) Besides that, each of those mornings, I drove 1-3 hours back home to work an 8-9 hour shift at my day job.

I rarely get paid for my photography, but exhaustion and lack of monetary payoff aside, I am in love with what I do. I never imagined I’d be to the point that people would want me to write about my experiences, that Reddit posts of my photography would hit the front page (41k upvotes and counting), or that strangers and friends would be asking me for advice — I’m just a guy who loves the world I live in and whose eyes shimmer like a little kid’s every time I look up at the night sky.

I still have a lot to learn and a lot to improve upon. I look forward to the future, but those formative moments as an innocent and naive student of photography will always be some of my favorites—when every shutter click was an uneasy step forward and I was always anxious to learn something new. I hope that that early spirit never leaves me.

I think often of the 10- or 11-year-old version of myself snapping wedding photos and wish I could watch him excitedly click away, but I feel lucky to be able to experience that same excitement every time I see the world through my own lens or look up and try to soak up the beauty of the sky.

About the author: Matthew Pockrus is a landscape photographer based in Utah and focusing on the American West. The opinions expressed in this article are solely those of the author. You can find more of Pockrus’ work on his website and Instagram.