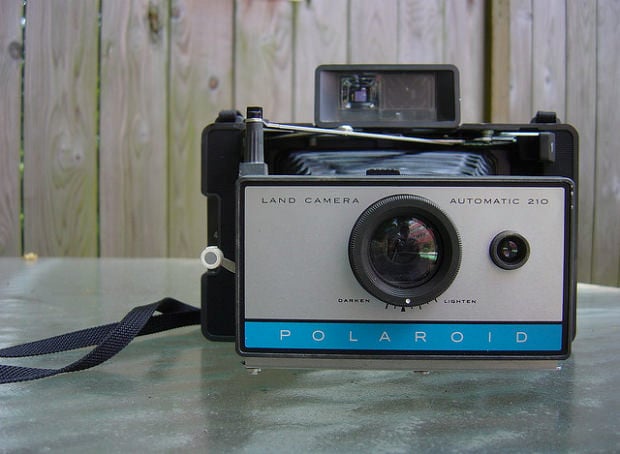 Last Thursday, 13-year-old Addison Logan of Wichita, Kansas found something really cool at a garage sale: an old Polaroid camera for only $1 (score!). But when Addison got it home and started looking up how to use it on the internet, what he found in the cartridge was even cooler, or maybe creepier. Inside the Polaroid camera, bought from a family they don’t even know, was a picture of his uncle Scott who died some 23 years ago in a car accident:

Lois Logan said she looked at the photo and saw her son, Scott, who died in an auto accident 23 years ago.

The photo showed Scott sitting on a sofa with a high school girlfriend, Susan. Lois guessed it was taken in 1978 or 1979, about 10 years before his death. She didn’t remember the photo, but thought it must be one of her old ones.

According to the Wichita Eagle, the family maintains that the picture is something of a miracle, a sign from Scott that he is still watching over them. But whether or not you’re into the supernatural, it’ll be hard to pass up the next cheap polaroid you come across at a garage sale — who knows what you might find inside.

(via The Wichita Eagle via Gizmodo)

Update: Dave Bledsoe over at FreeVerse Photography writes that there may be something fishy going on with this story. His argument is that the camera found by the boy may have been first introduced a decade after the photo was allegedly taken.

One Plus One Equals Three: Ken Burns on a Story Worth Telling