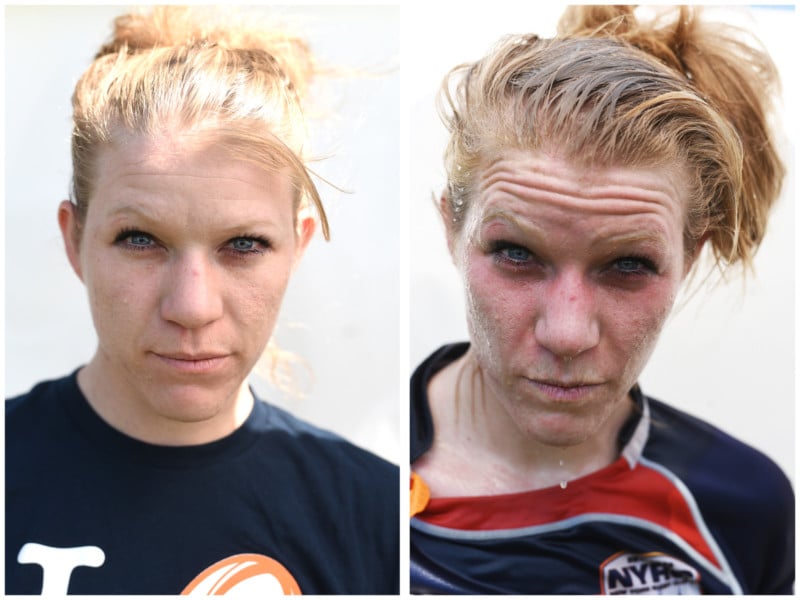 For the last several years, photographer B.A. Van Sise has been working on a project titled Sweat. It’s a series of diptychs of athletes: one portrait is shot as they’re arriving at a stadium, and the second is captured immediately as they come off the field.


Van Sise says he personally doesn’t like sports, but after a buddy convinced him to attend a New York Cosmos soccer match, the photographer began marveling at how the athletes never stop moving.

“Since then, I’ve been visiting with athletes of every stripe to try, situation and weather allowing, to photograph them identically: first, arriving to an event, and later walking off the field just seconds after they win, lose or quit for the day,” Van Sise says.

“After a couple years of it, there’s one big thing I’ve learned: some athletes like to sweat. And some athletes need to cry,” Van Sise says. “Time and time again, it’s become obvious that the most striking differences from one sport to the next come down to what Charles Portis, in his novel of the same name, referred to as true grit.”

“The differences are large, and it’s hard not to notice that the more physical the sport, the better the athletes take their pratfalls in stride,” Van Sise says. “Shooting roller derby ‘girls’ a few months ago, several of the competitors apologized- one of them profusely- because, after a couple hours getting knocked around, they’d forgotten my shoot and wiped the blood off their faces on their way off the track.”

“A professional wrestler, screaming in his pain from the capsaicin in his eyes after a stunt went wrong, stopped while having his face doused with milk to consider his sense of professionalism,” Van Sise continues. “‘Wait, I need to get my photo taken,’ he declared, half-and-half running down his cheeks. ‘F**k it, let’s do it.'” 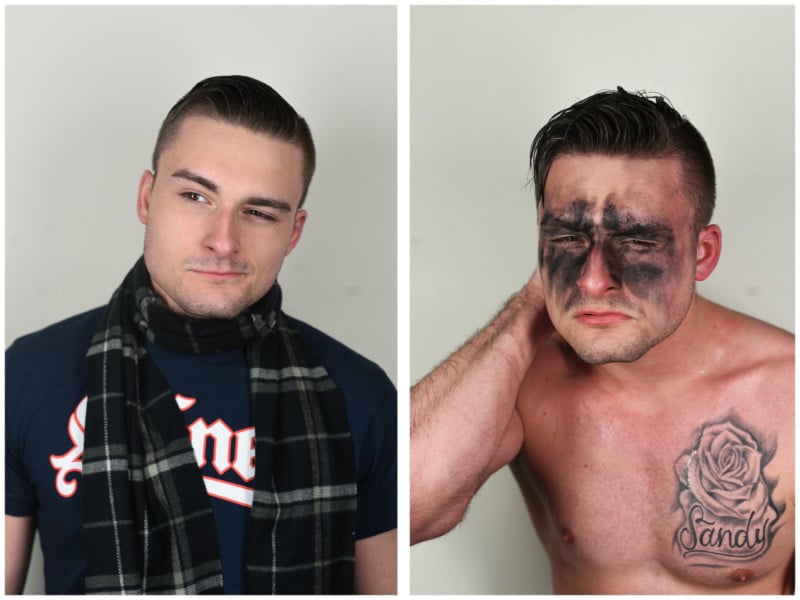 “Meanwhile, the professional baseball players photographed during spring training, after three largely inert hours standing out in a field, demanded that a stylist redo their coiffures before being photographed,” says Van Sise, “and most of the dozen professional bull riders I photographed — whose entire event consists of only eight very tough seconds of activity- refused their ‘after’ image, because they were concerned how they’d look, visibly crying after falling off cattle.”

Sweat was created in conjunction with the Peabody Essex Museum in Massachusetts.

“When I first decided to name this project for the folks at the PEM, I called it ‘Sweat,’ because I was pretty sure the museum curators wouldn’t let me name it after goose poop,” Van Sise says. “As time went on, I began to realize that perhaps I misnamed the project: some athletes perspire. Some athletes cry. Some do both.

“Maybe the work might better have been called, simply, Salt Water.”

You can find more of Van Sise’s work on his website.

How I Built a Star Tracker for DSLRs