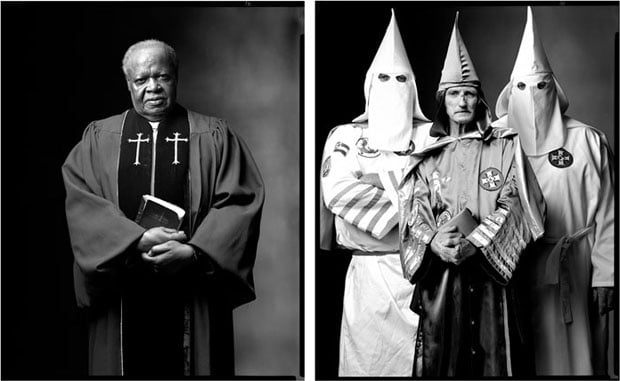 A black Baptist minister and a group of Ku Klux Klan white supremacists. You wouldn’t expect to see them together, but that’s precisely why they’re found side-by-side in photographer Mark Laita‘s project Created Equal. Laita spent eight years shooting black-and-white portraits of Americans that are on opposite ends of various cultural spectrums. The images are then placed into diptychs that are both jarring in their juxtapositions and powerful reminders of our shared humanity.

The title of the project is from the opening of the United States Declaration of Independence. Back in 1776, Thomas Jefferson famously wrote,

We hold these truths to be self-evident, that all men are created equal, that they are endowed by their Creator with certain unalienable Rights, that among these are Life, Liberty, and the Pursuit of Happiness.

In the opening statement of his project, Laita says that divides among Americans are growing. There is income disparity between the rich and the poor and major ideology differences between conservatives and liberals. “Even good and evil seem more polarized than ever before,” Laita writes.

The photographer says that at the heart of this collection of portraits is his desire to remind viewers that “we were all equal, until our environment, circumstances or fate molded and weathered us into whom we have become.”

You can find more photos over on the project’s official website (warning: some images are NSFW), and a lengthy interview with Laita about this project over on Turnstyle. The photographs have also been published as a book.

Image credits: Photographs by Mark Laita and used with permission