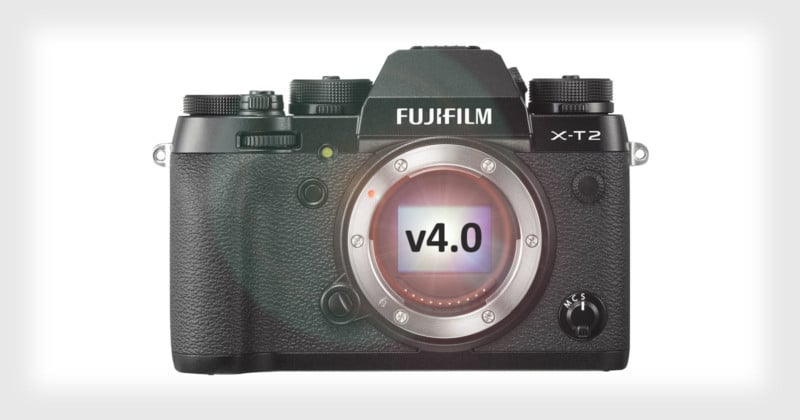 Fujifilm has just rolled out another ‘Kaizen‘ firmware update that brings major new features to an older camera. Among the upgrades arriving in v4.0 for the Fujifilm X-T2 are internal F-log and 120fps slow motion recording in HD.

Internal F-log is something that has been requested by Fujifilm shooters for some time. It allows F-log movie data to be recorded directly to the camera’s SD card instead of using the HDMI port and an external recorder. This upgrade lets owners capture optimal dynamic range while staying compact and mobile.

X-T2 owners can now use focus bracketing to stack photos for greater depth of field. Focus shift can be set from 1 to 10, and the focal point is shifted with every exposure for up to 999 frames.

Here are the other improvements found in the X-T2 firmware v4.0 update:

2. The ability to enlarge and customize indicators and info in the LCD and viewfinder. Things can now be moved around on the display.

3. “Flicker Reduction” has been added to the camera, reducing flicker in the display and in resulting photos when shooting under fluorescent light and other artificial light sources.

4. “Select Folder” and “Create Folder” have been added, allowing owners to determine where photos are stored. You can enter a 5-character folder name when creating a new folder.

5. Fujifilm X Acquire software can now back up and store camera settings to and from a file.

Here’s a short 4-minute video in which cinema5D shows off the newly upgraded X-T2’s capabilities:

This huge firmware update narrows the gap between the 2-year-old X-T2 and the new X-H1 flagship X-Series camera.

“Although the bridge between the cameras has just been narrowed, to my opinion the upper hand still goes to the X-H1,” writes Johnnie Behiri of cinema5D. “With its higher data rate recording, Internal body stabilization, the possibility to shoot in ETERNA film simulation mode out of the box and touchscreen autofocus (just to name a few), the X-H1 certainly has the lead.”

Nonetheless, we’re guessing existing X-T2 owners are delighted with these new free feature upgrades, and those trying to decide between the $1,400 X-T2 and the $1,900 X-H1 may now have a more difficult decision to make.

Hasselblad Launches Its Widest Lens Ever, The XCD 21mm f/4

Google Photos to Use AI to Colorize Black-and-White Photos