Hot on the heels of Canon’s EOS R announcement, Fujifilm has just announced their new camera, the X-T3. It’s the first APS-C sensor size mirrorless camera that records in 10-bit internally. We were lucky enough to get our hands on a production model to check its video capabilities.

Editor’s note: This is a guest article from freelance documentary cameraman Johnnie Behiri, syndicated with permission from cinema5D.

If you are short of time, let me start with my conclusion: the X-T3 is the best camera Fujifilm has ever presented when it comes to video performance. Interested in finding out more? 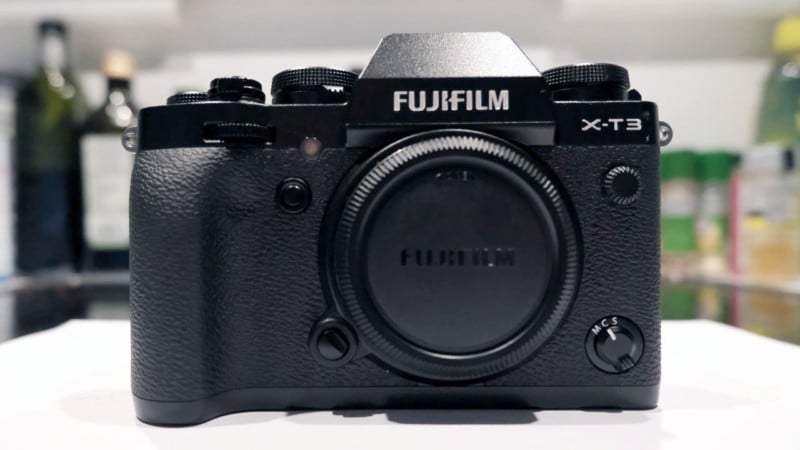 A Bit of History

If you’ve been following the development of Fujifilm’s cameras, I’m sure you have noticed that something very interesting is happening. From the moment the company noticed that shooting video with large sensor mirrorless cameras is much in demand, it responded by fulfilling that demand and then it hasn’t stopped refining their products.

The X-T2 was its first camera to include 4K recording and F-Log picture profile (externally first and then internally via a firmware update). Then, the X-H1 came and brought even more possibilities for the creative video shooter: in-body stabilization, internal F-Log recording, and the ETERNA film simulation picture profile, just to name a few.

Now, there is a new kid in the block, one that – in my humble opinion – surpasses both the X-T2 and X-H1 in terms of video performance. Fujifilm has listened carefully to feedback given by filmmakers and created its best ever video-orientated mirrorless camera. Including a completely new sensor and the processor behind it has led to some fundamental progress.

So what is there to be so excited about? Here is a complete list of enhancements – some to be found for the first time inside any of Fujifilm’s cameras:

What Could Be Improved

While there is an overall improvement in regards to the camera specifications and performance, it suffers from the absence of the following:

By now I can say that I’ve collected enough X-T3 hours in order to share that this is a well-thought through camera that has one major limitation, the exclusion of an internal body stabilization system. Once you work with such a feature you actually don’t want to look back. Other than that, this is a very easy camera to work with. Please allow me to highlight some of my favorite features:

I’m sure that many of you are wondering if I had any overheating issues. Well, during my work I did not encounter such a problem, but that said, only time can tell if this issue actually exists.

It is no secret that Fujifilm is heavily invested in making affordable cinema lenses for E (Sony) and X (Fujifilm) mounts (MK and MKX series of lenses). In my opinion, this is guaranteeing us that Fujifilm will not stop here.

Furthermore, by introducing the first ever APS-C sensor size camera that can shoot 10-bit video internally, Fujifilm is positioning itself at the forefront and becoming a serious candidate to consider when thinking of shooting video on a mirrorless camera. It is one of those companies that have no higher video market share to protect and as such, they are free to move forward as fast as their R&D capabilities and budget allow.

This particular camera should get some love and attention from the filmmaker community. For the users who are heavily invested in lenses from other brands, I can only hope that some sort of a program can be established by Fujifilm or alternatively, some other solution can be found in order to make people actually try it.

We hear a lot about the love for a particular “color science”. This camera can easily produce “analog-looking” images and furthermore, if you take photos with it, in my opinion, it is the one that looks less digital.

About the Sample Video Above

The shooting conditions at Radom airshow were FAR from being perfect. Rain, clouds and lots of noise made it challenging to execute, but all in all the camera performed well. On a few occasions, the camera froze and I had to turn it off and on again in order to revive it, but I could not isolate the problem. (It happened during shooting in different frame rates and resolutions).

F-Log picture profile. Sharpness and Noise Reduction turned down to -4, Mainly H265, ALL Intra 400Mbps DCI 4K/25p. (At times I’ve used H264 codec, 4K50p, 1080/100p). Grading is a very subjective thing… I chose FilmConvert for this job. (FJ Prov 100). Some shots were stabilized in post. You can download an ungraded version of this video for you to explore and grade here. Edited on Adobe Premiere CC latest edition.

A special thanks to the entire Baltic Bees team (Pilots, technicians, Arturs and Laura). Without their support, it wouldn’t have been possible to complete this project. By the way, if you are a pilot and looking to join an aerobatic team, drop me a line and I’ll connect you to the guys.

About the author: Johnnie Behiri is a freelance documentary cameraman/editor/producer/director working for many respected clients and broadcasters. The opinions expressed in this article are solely those of the author. Behiri is also a co-owner of cinema5D. This article was also published here.