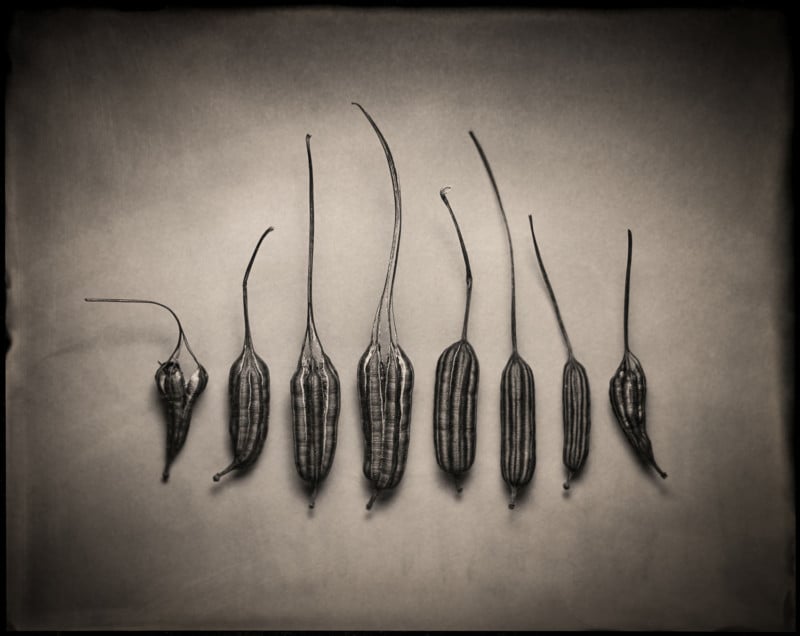 This year, the wet plate supply brand Modern Collodion ran its first annual Wet Plate Competition. The 2018 contest received over 200 submissions from 75 wet plate photographers based in 19 countries. The grand prize winner is the photo above, titled “Aristolochia Pods,” by Paul Barden.

Here’s Barden’s description of the photo:

I’ve had a life-long fascination with plants of all kinds, and seed pod morphology is particularly fascinating to me. The Aristolochia elegans seed pods are a great example, with their matte black woody hulls. This is not the first time I have used these pods as the subject of a photograph, but this is the first time I have crafted a photo of them I consider to be nearly ideal in style and feel. Only the wet plate collodion process could deliver such a result.

This wet plate image was made in a makeshift studio at my house, simply arranging a selection of seed pods on a dark grey seamless paper backdrop, held on with masking tape. The scene was lit with a compact fluorescent softbox from above, with some reflector fill from below. The compact fluorescents provided enough light to let me expose this scene at f11, using a Schneider Symmar-S 240mm lens. The collodion used in this case was very well aged Old Workhorse.

Here are the other 4 top photos (called “finalists” in the contest) from the 4 major categories: I have long been fascinated with the various ways the red pigmentation in our skin translates to collodion. Slightly under exposing skin tones can have dramatic effects. Pairing this with a high key background really shows off the the signature characteristics of the wet plate collodion process. Naomi was lit with 6’ diffused parabolic umbrella and the background was lit with a zoom reflector from above. This 8×10” tintype was captured with a Wollensak Vitax No. 5 on an E&HT Anthony 11×14” Studio camera using hand mixed chemistry.

I am self-taught and creates my work following the traditions of the 19th century masters. Utilizing chemistry, light, and a little magic, my portraits are able to capture the soul of the sitter preserving them for many generations. In an age of photoshop and manipulation, my images force us to face who we are and to graciously accept it. In addition to portraits, my landscape work connects the present to the past in vivid detail. 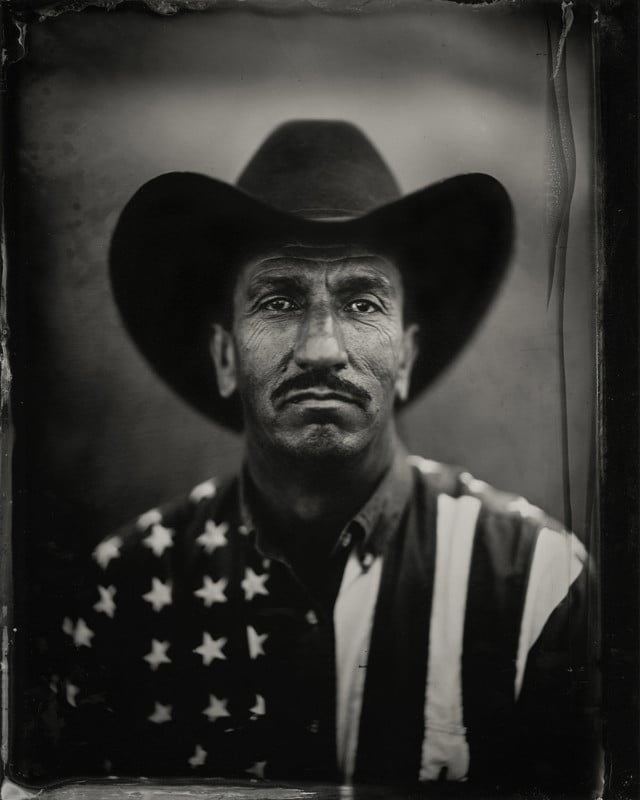 I learned about Wet Plate in early 2016, I purchased an old Ansco 8×10 camera, found a Dallmeyer lens on eBay, searched for a workshop, and turned an old work trailer into a darkroom.

I met Luis when I was looking to photograph another group of people that are close to my heart, “Immigrants”. Since I’m an immigrant from Cuba that left because of political reasons, I knew that I wanted to capture the people that cross the border searching for a better life, the people that work the fields, the illegal aliens that take work that no other American would. I was working on a project called “Organics”, shooting found flora and printing primarily on platinum/palladium, when I came across this little gem: a rhinoceros beetle. He was quite fragile, having been lying in the street for some time before I came along. And what better way to preserve such fragility than through another fragile medium: wet plate collodion.

My experience was limited with collodion, but I had a beat-up, full plate camera and plenty of glass. Luckily, with my coke-bottle lens and just-long- enough bellows, I could get a nice enlargement. After a number of tries, I hit it and the result is this beautiful specimen preserved forever. The plates after that were ok, but this was the one. A little while later I had a solo show of my Organics series and a number of plates from the series as well. Unfortunately, on the last day of the show, someone ripped the beetle from the wall and it has never been seen since. 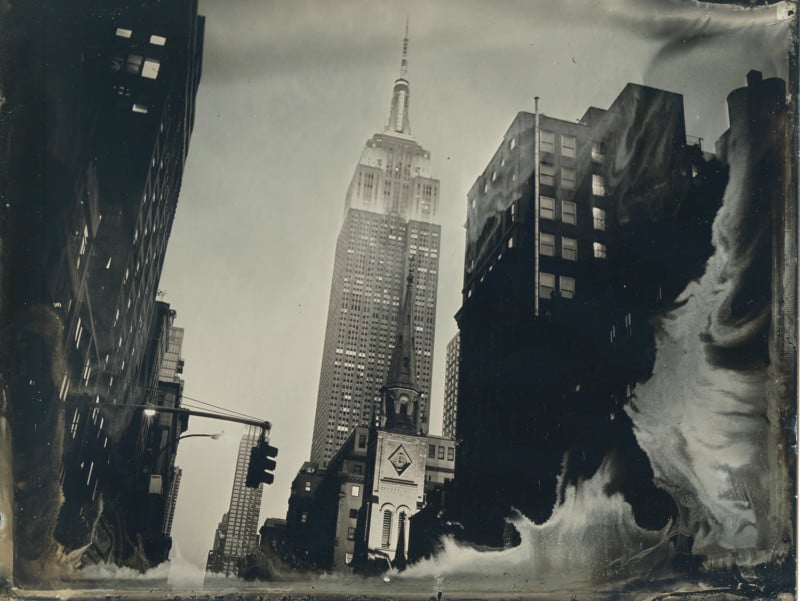 I started making wet plate images in late 2014 and was immediately enthralled with the process. I built my own portable darkboxes which eventually became mounted first on an old Cannondale M300; then to a workmans tricycle equipped with a darkbox that can handle an 8×10 plate. Recently I have made an 8×10 tintype using a pinhole camera made from cardboard box, tape, black paint, and a Coke can aperture.

The twilight image was taken during the “Magic 15”; the time that the lights on the Empire State Building were on after sunset but when there was enough blue light to show the background and surrounding buildings. The image was processed in the back of my Chrysler PT Cruiser and transported in a wash tank to my home. This was not the first twilight image but one that I am proud to have done.

The entry fee for this competition is $10. The grand prize winner receives a year’s worth of plates from Modern Collodion, a large bottle of UVP-4 Collodion and Varnish from UV Photographics, and an Intrepid Camera Co. 4×5 camera. The finalists win a $50 gift card to Freestyle Photographic Supplies and a $15 gift card to UV Photographics.

You can view all the photos from this year’s contest (including submissions) over at Modern Collodion (note: several of the photos aren’t work safe).