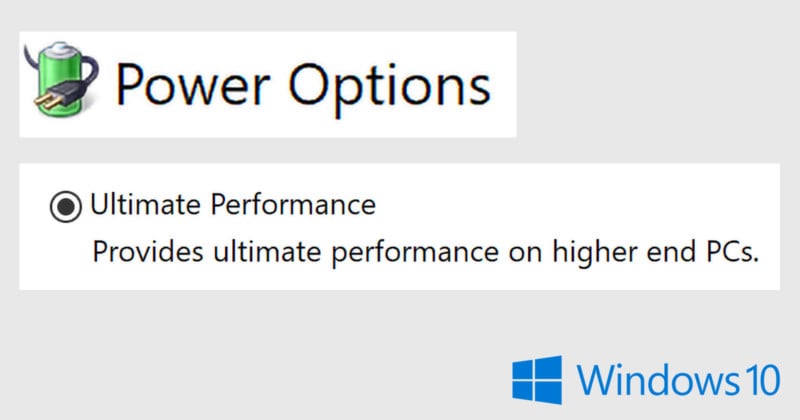 Want to squeeze some extra juice out of your Windows 10 workstation? Microsoft has just unveiled a new “Ultimate Performance” power plan that’s coming to Windows 10 Pro.

The new plan is designed for advanced users for whom “High Performance” isn’t enough. It helps speed things up by “eliminating micro-latencies” that come with “fine-grained power management techniques” — instead of thinking about power, the workstation will focusing even more on performance.

“As part of our effort to provide the absolute maximum performance we’re introducing a new power policy called Ultimate Performance,” Microsoft says. “Windows has developed key areas where performance and efficiency tradeoffs are made in the OS.

“Over time, we’ve amassed a collection of settings which allow the OS to quickly tune the behavior based on user preference, policy, underlying hardware or workload.”

“As the power scheme is geared towards reducing micro-latencies it may directly impact hardware; and consume more power than the default balanced plan,” Microsoft warns.

The new Ultimate Performance mode is being tested by Windows Insiders in the latest Windows 10 Insider Preview Build (17101). No word yet on when it will be officially released to the general public. It will also be interesting to see what kind of impact the new policy has on intensive tasks done in apps like Photoshop and Lightroom.

(via Windows Blogg via Engadget)